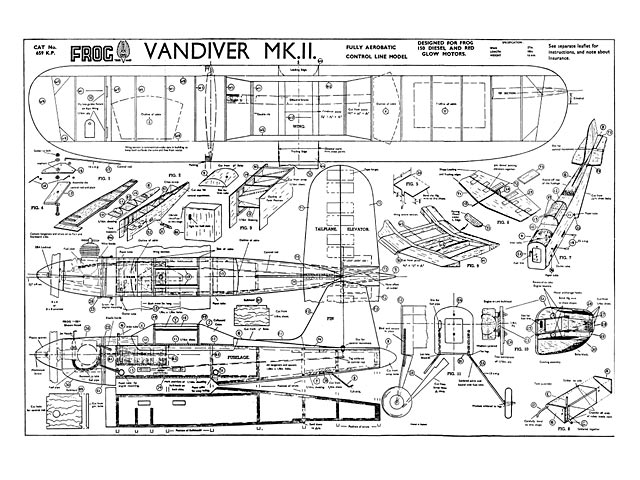 Quote: "Over the Counter Kit Review: The Frog Vandiver II and the Junior Series.

When C/L flying was still in its infancy in this country a semi-scale commercial model appeared which, with a low powered engine, astounded many of the experts of the time by proving to be fully acrobatic and, at the same time, a machine almost completely free from vices. That model was the Vandiver which, even on a Frog 100, would perform consecutive loops, eights and so on with the best of them. Yet it was essentially a docile machine. It would, for example, 'fly itself' inverted and was rugged enough to take a lot of punishment in inexpert hands and still come up for more.

Its modern successor is the Vandiver II - a completely new design retaining all the good features of its forerunner but with faster response and more 'modern' design ideas. It is a model which still has to be built - not slapped together in a hurry. But the Frog kit is wonderfully complete, crammed full of pre-shaped and pre-formed parts, including a stunt tank, plastic spinner, complete hardware, etc. Few kits in a similar price bracket begin to complete in this respect.

The Vandiver II is fully acrobatic on a Frog 150 engine and one of its main attractions should be its semi-scale appearance (with fixed instead of drop-out undercarriage this time). It could be a contest model, although its main appeal will undoubtedly be to the sports flier.

The other new Frog kits we had to examine were a selection from the Frog Junior series of semi-scale rubber powered designs. Prefabrication is very complete in these low price kits. All sheet parts are die cut, undercarriage wire bent to shape and the propeller assembly in plastic complete. Essentially all that you have to do is to stick the bits together and carve and sand the cowling blocks to shape. On some of the models a limited amount of tissue covering is necessary..." 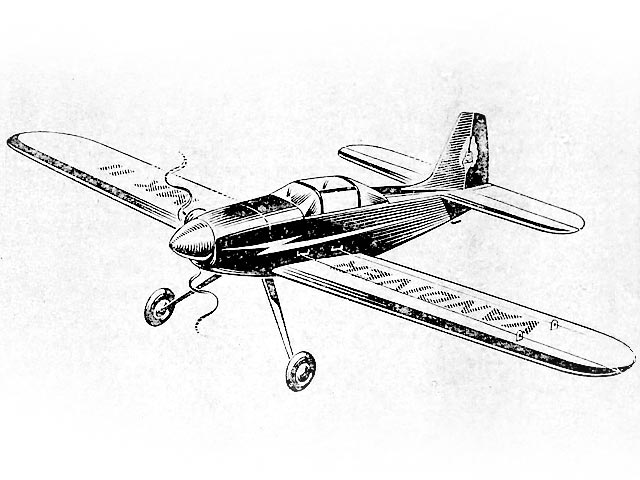