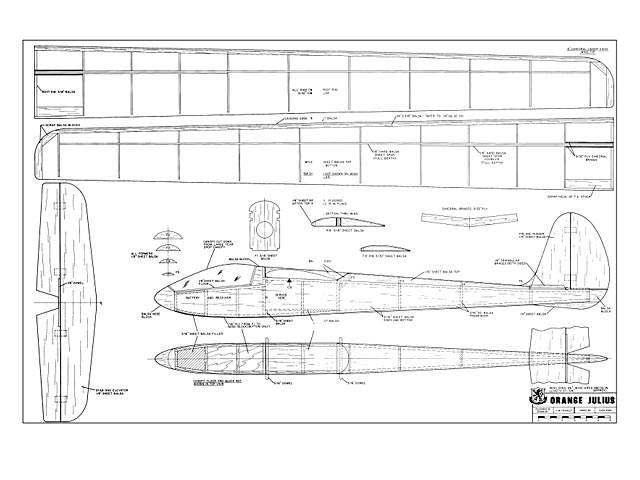 Quote: "As usual, we didn't have a model to fly, (one of the many problems of living in California is that there are too many flying days, and not enough building nights). This, and the recent purchase of a nice new three-channel proportional set (suitably disguised as a lawnmower in the family checkbook), brought on the usual crisis of what to build. Looking through the pathetic heaps scattered around the garage floor, there seemed to be a shortage of gliders, our latest glider having struck a large rock which happened to be floating on El Mirage dry lake, during a recent flying session out in the desert.

We've always been more interested in the easier-to-build type of model and, as a rule, anything that takes over two weeks to construct usually never gets finished. With this sort of time schedule, it's obvious that there isn't too much time to spend on an intricate structure, or something that's going to take several months to apply the finish. However, we didn't want a simple retangular box type model, so after a few hours doodling on a few sheets of graph paper, and a brief study of the latest in glider shapes from current magazines, we came up with the lines for the 'Julius.'

We decided to make the wing all sheet and eight feet in span for a couple of reasons; the first being that balsa sheet happens to come in four feet lengths, the second that we've never had an eight foot span model. We were also interested to see how an all-sheet wing this size compared to a built-up type in terms of strength as well as weight. We were a little worried as the building proceeded that the whole thing was going to be too floppy, but when the final sheeting was applied the wing suddenly became tremendously rigid, and none too heavy. The finished weight of the wing, covered and painted, was actually just under fifteen ounces. The only problem we found was to be very careful handling the finished wing in-the workshop, it's too easy to knock things around with the wing tips when moving the wing from place to place.

The total weight of the model, with two servos, receiver, etc., came out slightly over two pounds according to my wife's kitchen scales (these may be a few ounces out either way). At this weight the model flew very well in moderate conditions. A small amount of additional ballast might be required for a very windy day.

We've written a few lines on the model construction as follows. Anyone who has built any of Ken Willards designs should have no trouble with this model.

The wings, which are all sheet, are built first. Four sheets of balsa are required, the two bottom surfaces being 3/32 sheet, and the top surfaces 1/16 sheet. These sheets are four feet long, and taper from six inches wide at the root to four inches at the tip..." 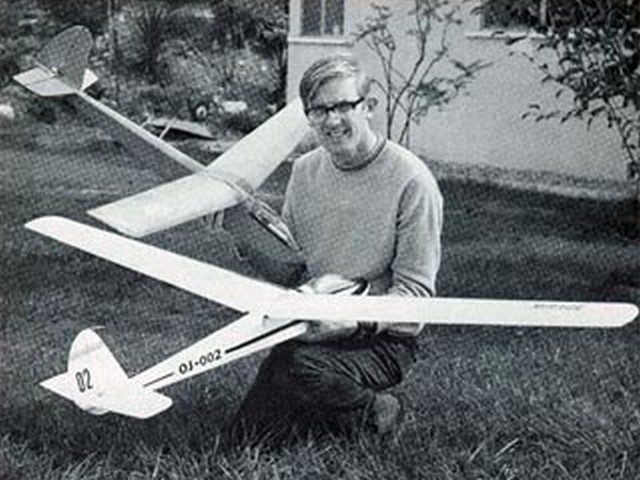 hi, sheet size on top and bottom of wing has disappered in the boader between two scans. regards
karsten - 19/06/2015
Add a comment