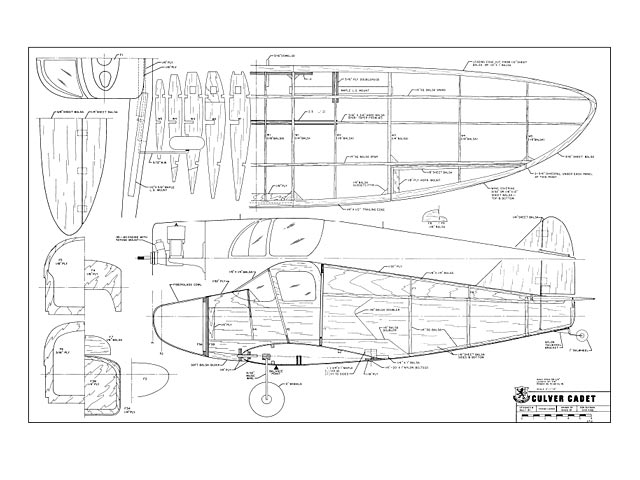 Quote: "The whole story is a feeling that comes over you when there is an uncontrollable desire to do something to, or perhaps, even for oneself. Such as building a model airplane that is just a little different than the next guys, or as the case may be in this day and age, girls. But in this instance we decided to build something that had retractable gear, was fully scale and, for the difference, featured a semi-elliptical wing.

The little Culver was ideal, easy to build, and best of all, it is all wood covered and easy to simulate. No rivets, lacing, and such trivia to complicate matters if you are contest minded. Being of no mind at all, I decided to model mine after a local hero's full scale prototype. Besides, he wanted to buy the finished model to hang in the hangar next to the real one. Isn't that just beautiful? Pity I can't find him now that the bird is finished. Oh well, the thought lingers on.

So, you say, this is exactly what you have been looking for. A neat little scale ship that is small enough to throw (gently of course) in the car and not take up too much room, and easy to assemble when you get to the field. Great, get some wood and start hacking. Don't forget the 1/32 plywood. Makes for neat turtlebacks. For that matter you could cover the whole ship with it.

There isn't anything really difficult about the construction, just lots of 1/8 sheet balsa for the sides and bottom. Try to pick your sheets very carefully. The sides should be as nearly the same in weight and grain. All the forward bulkheads are made from 1/8 ply except for F-6 and the firewall.

I have the mold for the cowl and if you need a cowl write to me and I will make arrangements to get one to you, although it is very simple to make your own mold. I made mine from balsa. You could even make the whole cowl from balsa. No matter, at least put a cowl on because it looks terrible without it. There are no scale details on the cowl and the slots are not in the wing. There are so many different mods around I figure you would rather do it yourself.

I would suggest building the wing before you get too far on the fuselage. This will enable you to align the wing to the fuselage properly and drill the front holes for the hold down dowels. One word of caution with the wing. Build it straight and add a degree or two of wash-out in the tips. If you have a wing jig this would help, but be very careful. A crooked wing will give some very interesting flight results - for a very short time.

The rudder tail post should be installed before sheeting the bot-tom of the fuselage. You can install the horn and pushrod completely inside but I found it easier to have the horn come out through the side so I could also hook up the tail wheel.

I think you will find room inside the fuselage to install just about any type of equipment you wish but balance this little beast just aft of the landing gear. Roughly speaking, about 3/4 inch back. I didn't show the installation of a retract gear be-cause at the time there wasn't the abundance of retracts on the market. It is best to use your manufacturers instructions for proper retract gear installation. The plans show 3 inch wheels but I used 2-1/4 ichn wheels which were about scale for the ship I was modeling. Besides, you can get away with a smaller hole in the wing! In the full scale aircraft there are two small windows in the cockpit floor that enabled the pilot to actually see his wheels in the up position. Pretty sneaky!

The scale Cadet I modeled had tinted windows and didn't have the full size side glass. The owner had cut it down. Originally, the sides came all the way over the top...." 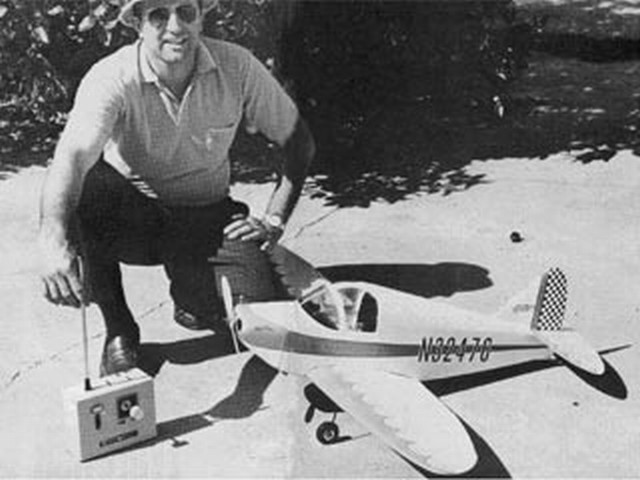