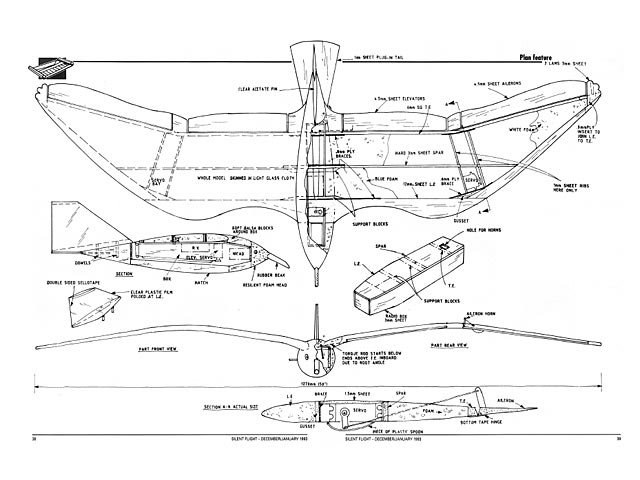 Gull. RC slope soarer model seagull. This is a scale model, at 1/1 size.

I have been fascinated by birds and their soaring abilities. Eventually I decided to model them to one-to-one scale (about 50 inch span). I started with the buzzard because it had a larger wing area - wide chord and straight wings (not 'gull wing'). It was made from white polystyrene, carved, filed (Surform) and sanded to shape, and covered with brown paper. I had great difficulty in getting the C of G far enough forward (20% chord for a flying wing) and had to add 9 oz of lead in the head. This meant that it was rather heavy and it used to hit our chalk South Downs very hard. It prefers flying in its natural habitat of heather covered moors.

I decided that a herring gull had better proportions, particularly if the wing tips are swept back in penetration mode. This has been much more successful - requiring no additional weight apart from a standard 500 milliamp-hr battery pack. It is carved from polystyrene and balsa and covered in light weight glass cloth and epoxy. All up weight is 1.5 lb, giving 12oz / sq inch wing loading, about the same as the prototype. In any wind more than 12mph it soars with the rest of them.

It all started when I was on the Isle of Man Steam Packet Company's ferry on the way to the Manx Soar-In week. There were all those gulls cadging a free ride by soaring on the up-draught on the weather side of the ship, Some came injudiciously close to my pocket camera and formed the initial impetus for my winter building project.

Visits to the local library failed to provide any three view drawings or details of wing span etc, but I was able to Establish that the length of a herring gull is 55cm. Armed with my photographs I set about sketching on graph paper arid arrived at e span of 1127m (50 inches).

My chief concern was to select a plan view such that the centre of gravity would be far enough forward. Past experience had shown that the CG of a flying wing should not fall behind 20% of the mean chord. I found that gulls vary their planform depending upon their flight mode. When thermal soaring they spread their wing tips for maximum efficiency, but when penetrating they gain speed by sweeping back the tips. I decided to incorporate a certain amount of sweep back as it has the advantage of moving the mean chord back relative to the head and making my task of achieving a satisfactory CG location easier. I toyed with the idea of incorporating variable geometry but decided to keep it simple.

Certainly the one piece model has turned out to be quite robust, not prone to the stripping of servo gears etc., and has a very accepts ble appearance in flight.

The Framework. Due to its shape, this model does not lend itself to being built on a plan. The prototype was built 'in hand' from a fifth scale sketch. The core is a box, open on its underside, of 3mm balsa..."

Quote: "The plan and article for John Conway Jones' Gull slope soarer from the long defunct 'Silent Flight' magazine of December/January 1993. I never built one but perhaps it will be an interesting addition to your collection?" 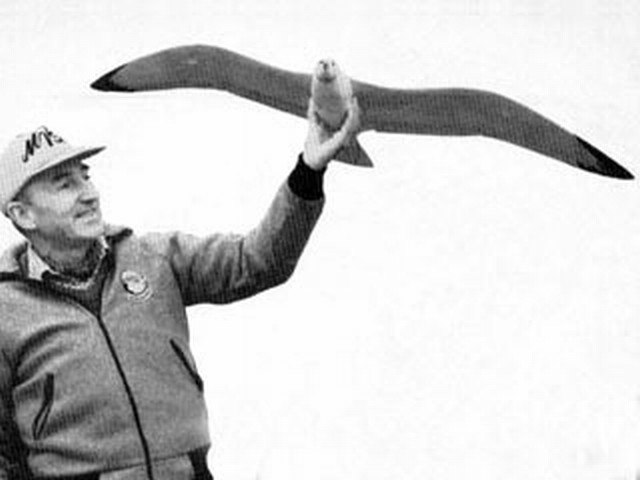