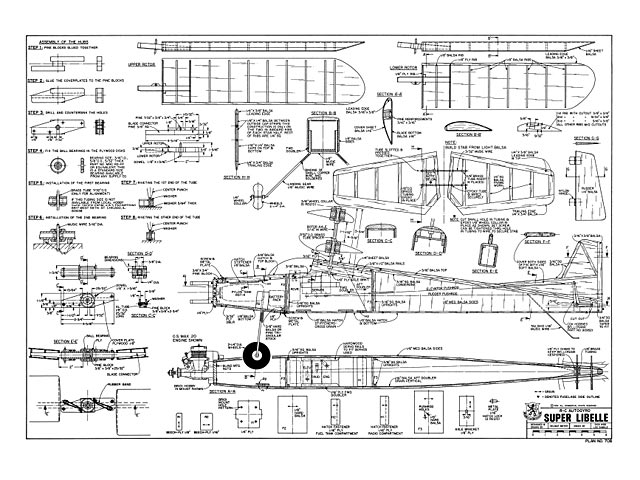 Quote: "Designed for .19 to .25 engines, this autogyro is a definite change of pace for sport flying. The Super Libelle is easy to fly and will always cause a sensation wherever you take it.

The autogyro, sometimes also called gyroplane, is an intermediate stage between an airplane and a helicopter and was developed more than 50 years ago by the Spanish engineer, Don Juan de la Cierva. Later the helicopter replaced the autogyro almost completely and today only few specimens are flying, such as the Benson Gyrocopter.

Cierva replaced the fixed wing of the conventional plane by 2 or more rotor blades to obtain extremely low airspeeds and very steep climb and descent angles. Contrary to the helicopter, the rotor of the autogyro is not connected to the engine, but driven automatically by the airstream passing through the rotor disc. The engine of the autogyro drives a conventional prop to reach the necessary forward speed so that the airstream will turn the rotor. Therefore, the complicated power line to the rotor and the tail rotor of the helicopter is not necessary. The whole design of the autogyro is much simpler than the helicopter, but the flight characteristics are also different. The autogyro cannot make vertical take-offs and landings or fly backwards or sideways or hover. The autogyro can only fly very slowly and can perform very short take-offs and landings. If the wind is strong enough, the autogyro can barely reach any speed over ground and landings with full throt-tled engine are then nearly vertical.

The building and flying of this radio controlled autogyro will present no problems, there are no more difficulties than with a conventional radio controlled plane, but this type of model will always cause a sensation and serves as a basis for futher individual developments.

When I started to develop a radio controlled autogyro. it seemed to be a simple job, because the construction is relatively simple and the rigid rotor (without controlled blade positions) should cause no major problems. The first model was built in a short time and the maiden flight took place. But this first flight was a great disappointment, immediately after launch the autogyro started to fly a roll and I had to collect the pieces of the rotor blades and think about the reasons for this disaster. Further test flights of modified versions ended with the same result, so I studied the literature about au-togyros to find the reason of this un-stable flight. I found the following rea-son:

When a rotor blade during its rotation happens to be moving forward, or in the same direciton the model moves, this blade has a speed equal to the rotation speed plus the model's forward speed. The other rotor blade has a speed equal to the rotational speed minus the for-ward speed. The first blade moving at a higher speed obviously produces more lift than the second blade with the result that the center of lift of the rotor during forward flight (which is necessary to turn the rotor) is outside the centerline and causes the tendency to fly steep turns or rolls.

Some tests with a rotor mounted off the centerline and with a seesaw-type rotor caused a lot of building time, but no real flight could be obtained. So I tried to install two contra-rotating rotors on one axle to compensate for the shifted center of lift of the first rotor with an opposite shifted center of lift of the second rotor, which rotates in the opposite direction.

The test flight of this twin rotor version was the first success and showed that this could be the right way to approach a radio controlled autogyro. Some modifi-cations had to be made to find the right location of the Center of Gravity, to de-velop a practical rotor design and to find the best angle of the rotor axle. A lot of test flights (and repairs) had to be performed to come to this final design, called 'Super Libelle'. A 3-channel radio was used to control elevator, rudder and throttle and no difficulties were found in controlling this autogyro. Some words should be said about the engine used..." 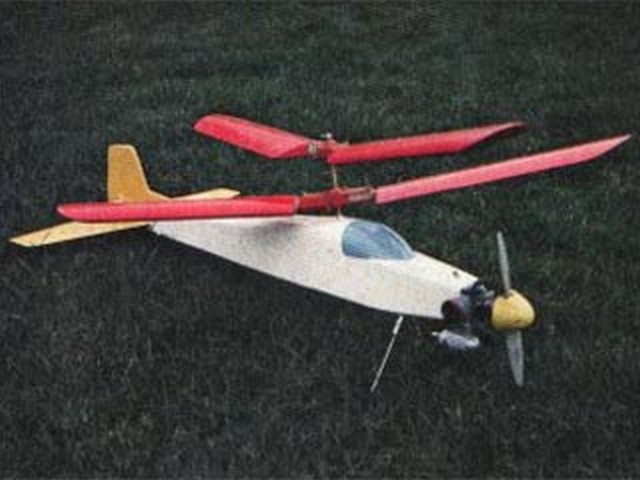