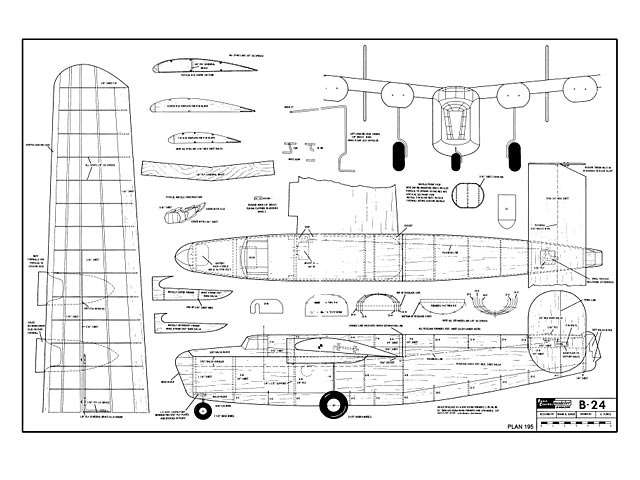 WHEN I indicated my intention to build a radio controlled scale B-24 at a meeting of the Madison Area Radio Control Society, I received the usual smiles reserved for such projects. Mentioning that it would be for rudder only brought a chorus of: You are out of your mind! Thus encouraged, I proceeded to build and successfully fly what appears to be the world's first four engined rudder only scale R/C model.

The B-24 was a natural choice due to the large twin rudders which are directly behind each pair of engines and the general bulky airframe configuration. Before building the B-24 I constructed a semi-scale PBY which was used to test several radical ideas about multi-engined R/C models. The PBY turned out to be a very docile ship on either or both engines. In fact, the PBY was used as my practice plane for our local limbo contest. Experience with the PBY indicated that the secret to successful multi-engined rudder-only design was fourfold:

1. Some form of proportional control is mandatory.
2. Build the plane large.
3. Make it as light as possible.
4. Do not over-power the plane.

A glance at the B-24 plans reveals all four of these maxims have been closely followed. The radio equipment is simple pulse proportional, the span is a generous 60 inches, the weight ready-to-fly is only 44 ounces, and the power is provided by four Cox TO .020's. These characteristics arc diametrically opposed to the usual multi-engined scale plane which is normally heavy, overpowered, and aerodynamically unstable.

Hopefully, the B-24 will start a new trend as I am convinced nearly any four engined plane can be flown following the four axioms given above.

The most common question heard at the flying field is: How are you going to start all those engines? Rather than keep you in suspense, here is how it is done. Start the outboard right (facing the model) engine and adjust it to run smoothly. I do not attempt to peak out the engines but settle for a smooth run-ning engine on sport type fuel (Cox Blue can). Then, start the next engine and repeat the process until all four engines are running smoothly.

On larger multi-engined planes tachometers are used to synchronize the engine, but this is too much bother for sport flying. Hence, the engines are synchronized by sound and sight, and not too well at that. When all four engines are running. I quickly stop them by stuffing a cloth into the props. The tanks are topped off, and I restart each engine.

Using this procedure, the Cox's will actually start with one flip, hence, engine starting is no problem. Normal practice has been to start the two outboard, then the two inboard engines in hopes that they will quit in the same order. It has also proved more convenient to let one person start the engines while a second person holds the plane.

The B-24 is a very docile aircraft to fly and behaves like a Midwest Esquire (oz384) or a Debolt Champion (oz413) on a .15 engine. The first few flights were hand launched, but it was discovered by accident (someone let it go) that it will ROG from a grass field in about 50 feet...." 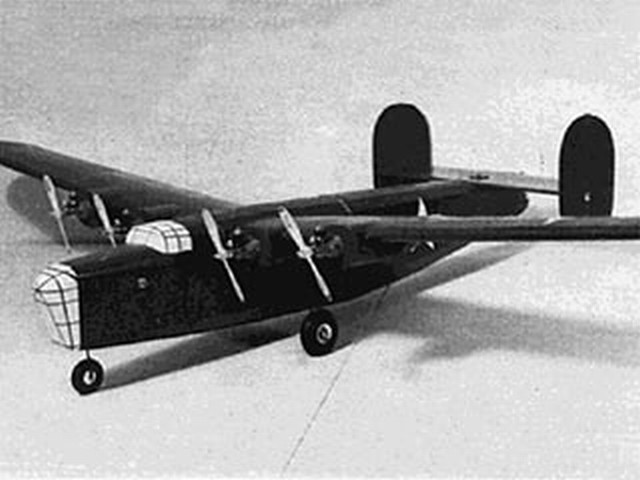 I used the b-24 plans from your site and made some dtfb plans and build. wasnt sure how to upload a picture of my build to your site. Heres the plans i used: http://www.outerzone.co.uk/plan_details.asp?ID=6706 Pic attached [see more pics 003] build thread link: http://forum.flitetest.com/showthread.php?20801-B-24-DTFB-design-and-build-log
Nate - 11/09/2015
Add a comment