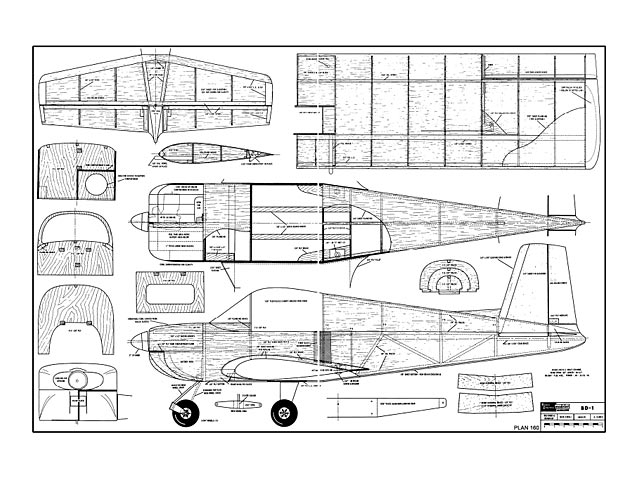 THE small plane boom that was predicted and expected after World War II just never came to pass. Not that there weren't numerous attempts to get the public in the air. The Piper Skycycle and the Lockheed Little Dipper were two attempts that, for one reason or another, never quite made it.

Now, twenty years later, it appears that the 'boom' is on its way to becoming a reality. This could be made possible by pilot designer, James Bede of Bede Aircraft, Inc, and his amazing BD-1. I say 'amazing' because this is an all metal, low wing, two place fully acrobatic plane with a price tag of $2,500! This is with a re-manufactured 65 hp engine. The lowest price plane currently on the market has a price of more than twice this amount.

Price is not the only amazing feature of the BD-1. As stated before it is fully acrobatic, stressed to 9 C's, upright or inverted. The wings are removable. A single 61/2". tubular steel wing spar plugs into stubs protruding from the fuselage sides in a fashion that has been used on models for years. Wing span is 231/2 feet.

Construction is almost completely metal. A honey comb structure is used in a good portion of the fuselage. Very few fasteners are used in construction, with parts glued together with epoxy, instead.

Sound familiar? Parts that aren't metal, are constructed of fiberglass. This includes engine, cowling, wing tips and fairing, tail plane tips, and tail cone. One unique use of fiberglass is the landing gear. It offers light weight and better shock absorbing capabilities than conventionally constructed gear.

Possibly the biggest factor in making the low price possible, is the small quantity of parts required. There are 385 parts in a plane, most of which are interchangeable, adding up to only 175 different parts. For instance, horizontal and vertical tail surfaces are identical and interchangeable!

Many options are planned to be made available. Engines up to 108 hp can be supplied giving a top speed of 155 mph. The price will go up according to options desired, but even with every option available you won't be able to spend over $5,500.

Only the future will tell whether or not the BD-1 will become a reality.

The good appearance and straight-forward lines are what inspired me to build the BD-1 as a model. It cannot be claimed that this is an exact scale model but rather semi-scale, or scale-like. The drawings were scaled up from an available three-view. Areas and moments were juggled a bit in the interest of flying ability. Stabilizer area was increased as the scale area is quite small. A thicker airfoil was also used to aid low speed characteristics. This proved to be of great value on the very first flight since I am used to long tail moment arm designs, such as the Taurus (oz612), and their rearward center of gravities. The BD-1 was set up this way. After a short take off run it was in the air, mushing along and hanging on its prop. Excessive elevator travel and insufficient trim travel made it impossible to keep it in a proper flight altitude. There was little tendency to fall off on either wing even in the extremely nose high attitude. The first flight ended in a rough cross wind landing followed by a cartwheel.

The center of gravity was then moved forward to the 25 per cent point. Further flights went off with no problems at all. The appearance in the air is very realistic.

It is assumed that anyone who plans to build the BD-1 has some building and flying background. Not that it is difficult to build, but it is not for a beginner. With this in mind, we will not use up precious space with detailed construction details. Instead, only a general outline of building steps will be covered.

A fiberglass cowl was used on the original model. Due to the tail heavy condition and the fact that the BD-1 nose is so squarish it was decided to show a built up block nose on the plan. The fiberglass cowl is very light, which is fine, but not when you need weight in the nose!

You may have noticed the extensive use of 1/8 in plywood in the fuselage. The large size of the formers made this necessary for strength. I use a furniture grade of plywood for low stress areas such as formers, and doublers. This is available at kitchen cabinet manufacturers and some lumber yards. It is quite inexpensive. High stress areas such as fuselage sides, firewall, dihedral braces and landing gear mount, should be Sig or another quality grade of plywood..." 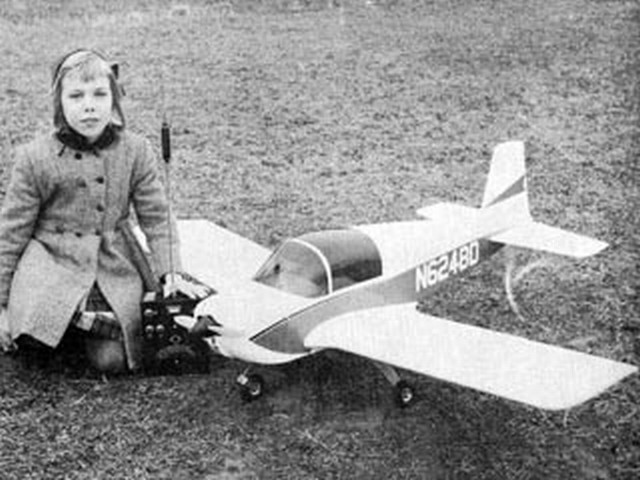