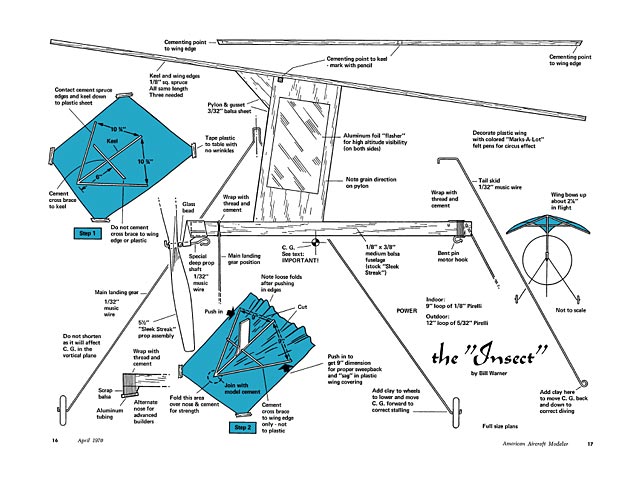 THE 135 degree sand, and the sharp weed stubble having just about finished the soles of my bare feet, I thought to myself, 'This is a real Tenderfoot project.' I had just retrieved Insect No.3 from a 7-1/2 minute flight across the Los Angeles River. (The original model, using a 10 in loop of Pirelli rubber vanished 2,000 feet high after 14 minutes). My shoes, left on the bank for easier fording, had disappeared when I returned, precious thermal-riding Insect in hand. The difficulty of explaining this to my wife as I limped home was almost as hard as explaining to the uninitiated why such a simple flying machine could do such fantastic things!

The Insect was developed as a Rogallo-Wing demonstration for a class I was teaching in Flying Machines at the junior high school level. It grew out of Ron Moulton's Project Parasol in Aeromodeller and an excellent article in the 1964-5 Zaic Annual by John Worth. The Rogallo-Wing (para-wing, sail-wing, flex-wing) was tested by NASA with an eye to space vehicle re-entry, but really makes a bang-up crowd-pleaser which gives a high return on your investment!

The secret of this machine is the proper center-of-gravity (CG) location. Many modelers forget that the center of gravity is a three-dimensional thing and not just a point on the wing where you balance your Piper Cub 'front-to-back.' Actually, the CG is the point where the model balances in any direction, and the vertical or 'up-down' position must be taken into account on the Rogallo-wing design. A lower CG tends to give the same anti-stall effect as a forward CG, and is obtained through the use of long landing gear with wheels or clay a long way below the fuselage. The landing gear can be made shorter, but you will have to use heavier wheels to compensate and keep the CG where it belongs: on the thrust-line (right where the rubber motor goes).

Building the Insect is super-simple. The flexible wing is begun by taping one layer of thin dry-cleaner bag to a table top. Actually, you may save time by making a pattern and placing it underneath, to guide you in contact-cementing the keel and sides in the right places. Cut three 1/8 sq spruce sticks and contact cement them onto the plastic in the arrowhead shape shown in Fig.1.

Cut the cross brace from the same material and cement with Ambroid or other quality model cement to the keel (center stick.) Do not cement it to the plastic or to the wing edges - just keep it at right angles to the keel while it dries. Cut the pylon and gusset from soft sheet, keeping grain direction as per plan. Cement pylon assembly to keel as in Fig.2, then take it off the keel, and let cement dry. This pre-coat is important for a strong butt-joint. Glue it on again; make sure it does not lean to the side while drying (a babyfood jar block on each side works fine for this).

In about a half hour, finish wing by un-taping plastic and moving wing-edges into the 9 in dimension shown in Fig.2 and cementing cross-brace to edges (but not to plastic.) Trim excess plastic, leaving a bit at the nose to fold over for extra strength. Remember, contact cement sticks plastic on, but Ambroid doesn't.

You can build your own fuselage or use one from a North Pacific 'Sleek Streek' cheapie flyer. The prop assembly from this plane works OK, but bending a deeper prop shaft and putting in a glass bead will keep rubber from climbing off the motor hook and will cut friction and wear to a minimum. If you use the stock front end, be sure and oil the shaft, use shorter motors, and keep rubber lube away from the hook. A bent pin hook works better than the staple you get with the Sleek Streek for keeping the rear of the motor in place..." 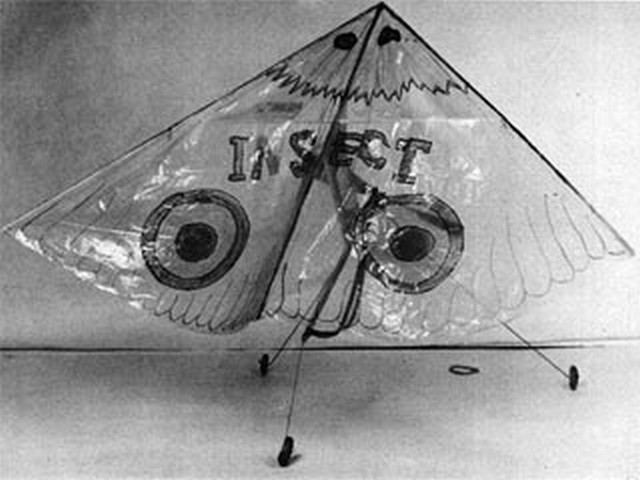