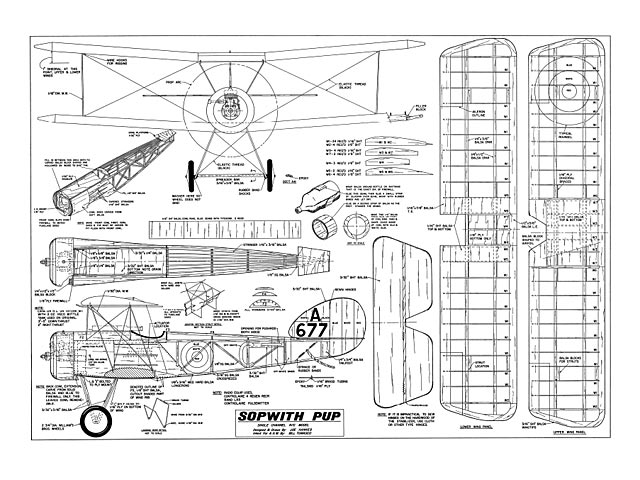 THE AIR WAR during WWI was waged on a month-to-month basis. From 1914 to 1918, an aircraft design was effective for about four months. A plane gradually built up to its peak of operation, stayed there for about four to six months, and then slowly declined into obsolescence.

In 1915, the German Fokkers, equipped with a machine gun which fired through the propeller, were knocking down Allied planes with ever-increasing regularity. A ship capable of combating them was desperately needed. The Sopwith Aircraft Co worked feverishly to replace their now-obsolete Sopwith 1-1/2 Strutter. Finally, in January 1916, the plane which was to become known as the Pup first flew. By February 6, 1916, acceptance papers were signed and production of this little jewel began.

The Pup, which spanned 26-1/2 ft, was a much smaller plane than the 1-1/2 Strutter. Using an 80-hp Le Rhone engine, its all-up weight was 787 lb. Later, performance was bettered with a 100-hp engine at only a slight increase in weight.

Early in March, the new planes started to reach the front. Pilots in the English Sector, who were the first to receive the Pups, were jubilant over their performance. They were easy to fly as compared to the Camel, which had bad spin characteristics. This little Pup could take off with a run of only 100 ft, and came in for a landing at only 30 mph.

The plane got its nickname from the pilots who considered the Sopwith 1-1/2 Strutter the Dad, and the new plane the Pup. The British brass thought that Pup was an undignified name and gave orders not to use it. But the order was never heeded.

The model of this jaunty and frisky little plane was designed with pulse proportional (Galloping Ghost) in mind. Wing loading comes to only 11.4 oz per sq ft, since the total weight is 24 oz; total wing area, 394 sq in. An Enya 09 RC engine does a respectable job of flying the plane in scale-like fashion.

The large control surfaces may cause some eye-popping at first, but only the inner holes on the Rand actuator and the outer holes on the control horns are used. Total throw is about a half an inch. Those who are brave can use full throw, put in a 15 engine, and get some real combat action.

The Pup is a fine fun flier. Its dimensions are not exact enough to win a scale contest but, when that tail lifts on the takeoff, and the ship gently lifts into the air, that's modeling at its best.

Construction. Fuselage: Cut out 2 parts of F5 from a firm grade of 1/8 sheet balsa. Lay out the remainder of the side view, using the balsa size indicated on the plan. Glue each joint well with white glue and let dry overnight. Make the other side view the same way.

Join the sides with the crossmembers. I usually sketch the top view on my building board and assemble the sides directly over it. Cut out F3, F4, and F5 and cement or glue to the fuselage. Next install the stringers. Cut out the firewall. For an 09 engine, 1/8 ply will do, but 3/16 ply is more versatile and can be used with the larger engine..." 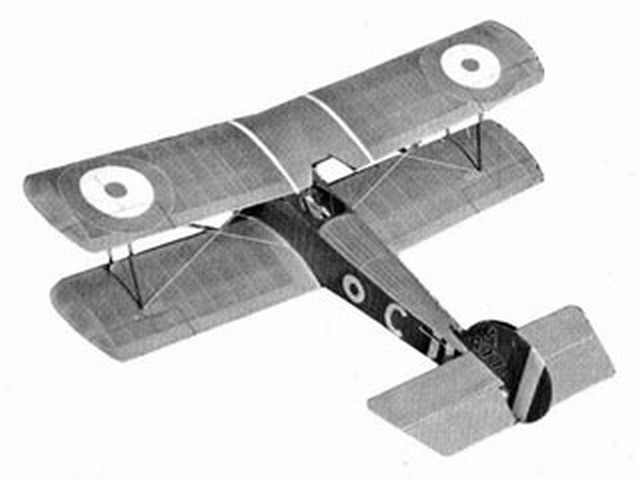