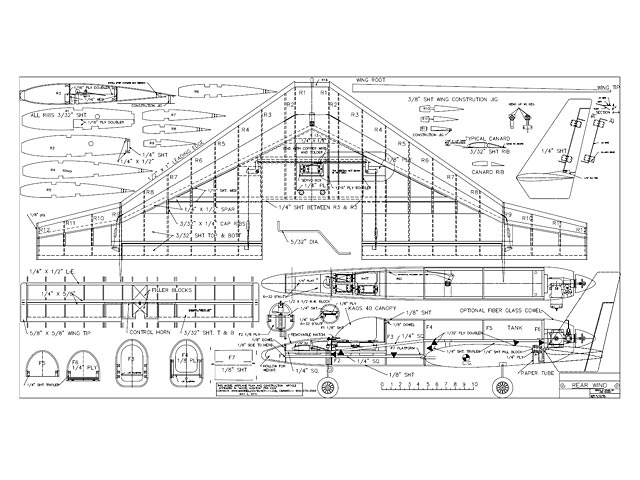 Quote: "Do you like the Long-EZ canard, but you don't want to build a Scale airplane? Did I hear you say that you want to fly something different, but you want it to fly as good as your Sunday flier? The Rear Wind is just what you are looking for.

The Rear Wind is my fifth-generation canard pusher. It started about four years ago with a 1/4-scale version of Jim Parrish's Dart. The planform of the wing is now a modified delta; I retained the original airfoil of the Dart. The canard was designed to be mounted with three 6-32 machine screws so I could change the incidence readily.

On the sixth flight, disaster struck. After takeoff. I did a roll. The roll was very slow and I got worried. I was about to land the model, and about 75 feet up it went into a dive and planted itself in the soft ground. The switch harness had gone bad.

The black or negative wire had built up a black coating an each strand of copper - an electric plating or oxidation of some type. Since this type of harness has crimped connectors, the coating had come between the wire and the connector. This caused enough resistance to shut the radio down. I installed a new switch harness and the model was ready to go again.

There is plenty of power with the K&B .40 pushing it around, I run it just a little on the rich side to keep it from getting hot on the ground. It takes a few flights to get used to seeing the small wing in front of the big wing. I am having a lot of fun with it.

Construction. If you are to rate the difficulty of building from 1 (beginner) to 10 (expert), I would say this project is a 5.

Wing. The wing is built in halves. A construction fixture must be used. It is a taped piece of 3/16 sheet and is put under the trailing edge of the wing..." 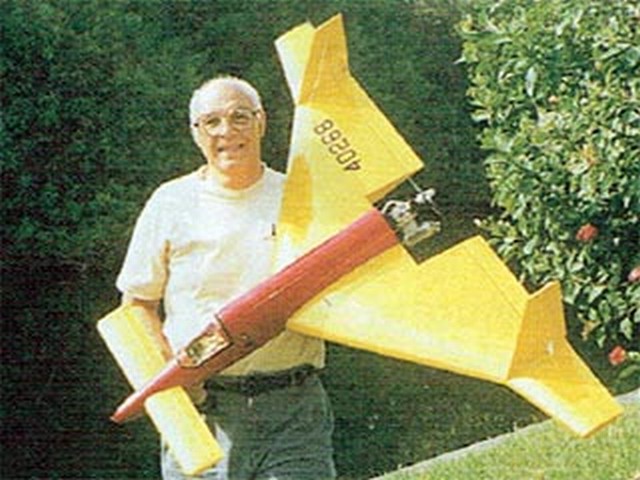