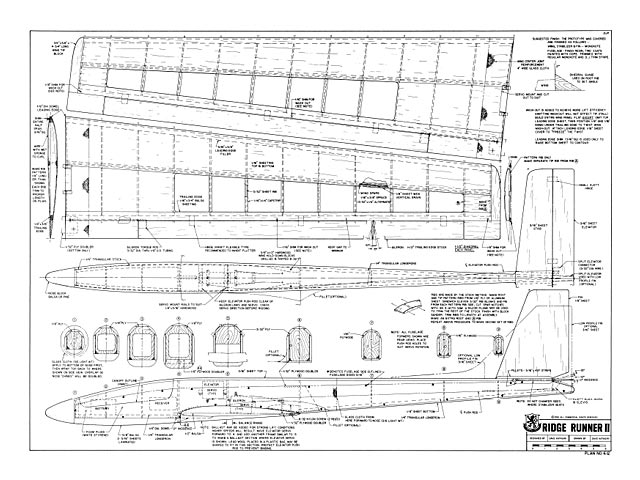 Quote: "Designed for slope aerobatic and pylon race events, the Ridge Runner has placed in the finals of both the 1973 and 1974 RCM Trophy Races. Ridge Runner, by Dave Katagiri.

Want to try something different in slope soaring gliders? Here is a design that not only provides crisp control authority to fly turbulent ridge currents with confidence, but also has acrobatic abilities that will keep a pattern flyer interested. The Ridge Runner was designed with three basic criteria in mind:

Aerodynamic configuration characteristics are shown in Figure I . In its stock acrobatic suit the design is capable of all (except spins) maneuvers listed for AMA Class C' Glider Acrobatic Event described in the 1974 rules book (page 49). In order to do the 2-turn spin, the rudder must be actuated by separatc servo. The prototypes are flying with only aileroins and elevator. Coupled ailerons and rudder might spin but the roll will become helical in shape. In addition to the 10 maneuver list the Ridge Runner will loop outside. Tennessee Twist (1/2 outside with 180 rollout at bottom), 180 turn and four-point roll.

Although it was not intended for agressive FAI weight limit pylon racing the design has faired well in recent slope races, because most have not been blessed with 20 mph winds to permit the 11 pound lead-lined birds to do their best. Admittedly, the Ridge Runner is no thermal floater, but at the same time it can 'hang in there' with any existing 6-footer in a 7 mph slope wind. The original has flown at 36 ounces in 20 mph winds and, at 50 ounces, became a groovy flyer with momentum to carry through maneuvers as if powered. Ballasting beyond this loading may be possible, but not recommended unless more structure is added to increase wing bending strength. A fiberglass body would be another desirable mortification for heavy versions that may have to land in rough terrain usually associated with slope soaring. Full wing sheet cover plus glass cloth overlapped 3 inches across the center and out 12 inches from the center should allow a higher loading and safe pylon turns.

Speaking of safe, in any event, when adding ballast be certain it is attached securely and preferably at the bottom of the body so landing loads produced by the ballast won't pass through the body structure. However, in its stock form with a 9 percent thick wing and 9-10 oz/sq ft it will still leave most cliff hangers behind, and it will expand your acrobatic flying envelope with only 2 channels so let's move on and build one..." 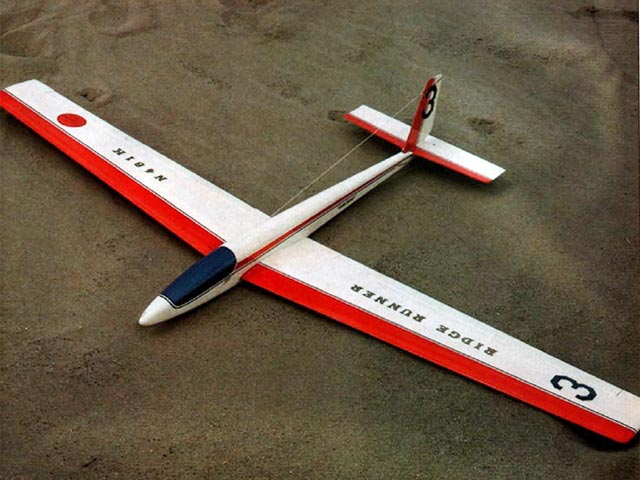 I met Dave at a float plane contest 75-76, don't remember the exact year, at Haystack Reservoir in Oregon. I had read the article in the AMA magazine and ordered the plans. So I built it and it has been hanging ever since never flown. I got out of the hobby and recently a friend of mine saw the Ridgerunner setting there. He has given me a transmitter and receiver. He is going to take me and fly it. Should be fun after all these years.
Dean - 15/07/2021
Add a comment