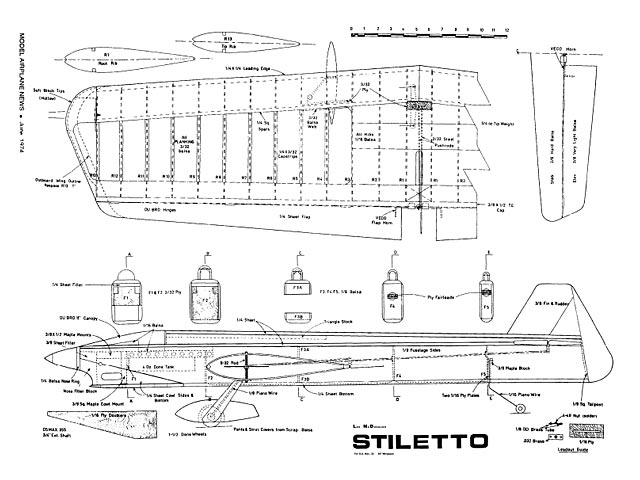 Quote: "Steve, this is the 1974 NATS Stiletto by Les McDonald. The airplane sported an O.S. Max .35 and had an uneven wingspan of 54 inches. I enlarged this plan to fullsize."

Quote: "Three time World F2 Champion. Les McDonald's Stiletto is legendary in our sport. Follow along as Les takes us on a journey of remembrance of his years designing and flying the many iterations of this outstanding design. The Stiletto Chronicles, by Les McDonald.

The first Stiletto. I'm a lucky guy. In my life I've experienced many things, some good some bad. One of the really great adventures was being able to fly Stunt, at a high level, during what could arguably be considered the 'Golden Years' of the event. I started flying at contests around the Southeast in 1969. I live in Miami, Florida; not exactly a hotbed of Stunt activity, so I had to figure things out on my own. Magazines were my only contact with the Stunt world; no videos, no intentet, no SN. Oh poor me, what's a guy to do'?

Al Rabe had brought his Bearcat (oz5171) to the 1969 King Orange contest and I finally saw the pattern flown by a Nats level flier. I was impressed at the precision, power, and business-like performance. It rained a good portion of that day so I spent the afternoon, in Al's rental car, listening to stories about planes, people, and subjects I was about to dedicate my life to.

The first Stiletto was built in the summer of 1970. It was a very basic design that was powered by a Fox .35. Jim Kostecky and Dave Gierke were my magazine heroes at the time. I had seen Jim's green Talon at the base flying field in 1968 during my Air Force years at Bunker Hill AFB, which is located near Peru, Indiana. Some AF Captain had bought it - the same plane I had seen in Flying Models. It was magnificent.

When Dave's Novi IV article came out I knew what I wanted; a purpose-built Stunt model. This plane had the profile that inspired all the eventual Stilettos. Notice I said profile, which is not to he confused with planform, since the Novi's elliptical wing was beyond my building skills.

I had no interest in semi-scale. Traditional Stingers did not seem to exclaim enough fantasy and the jet styles had too many frills, even though I was totally enchanted by Jim's and Dave's models. I know this seems to be at odds with what I wrote earlier. I will admit I have always admired Stunt models in all their shapes and themes but I wanted to create my own program.

That first Stiletto used a modified version of Jim Kostecky's Formula S wing. I built this wing - as I did all my other C-Tube wings - on a simple two rod wing jig. I also borrowed the stab/elevator shape and construction from the Formula S. The design's main feature was the use of only sheet wood; no blocks were used in its construction. In fact all the early Stilettos - with the exception of two foam wing versions - used this same bask construction. I have never been an innovator, inventor or clever designer so it was imperative to keep things simple... "

Article.
Article (later), thanks to GeorgeAlbo. Note this is a much later article from Stunt News Oct 2009. 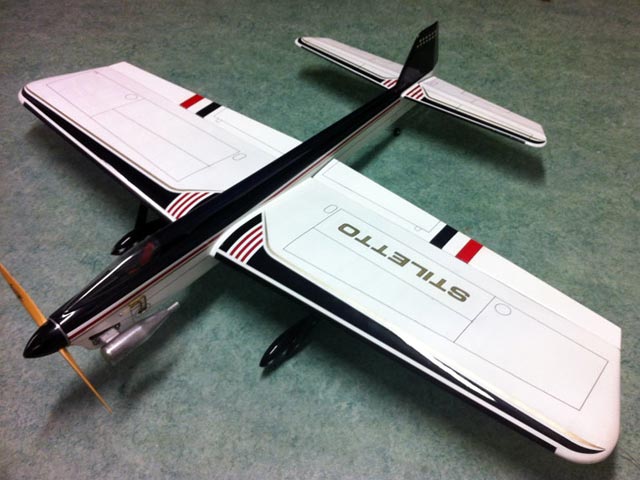