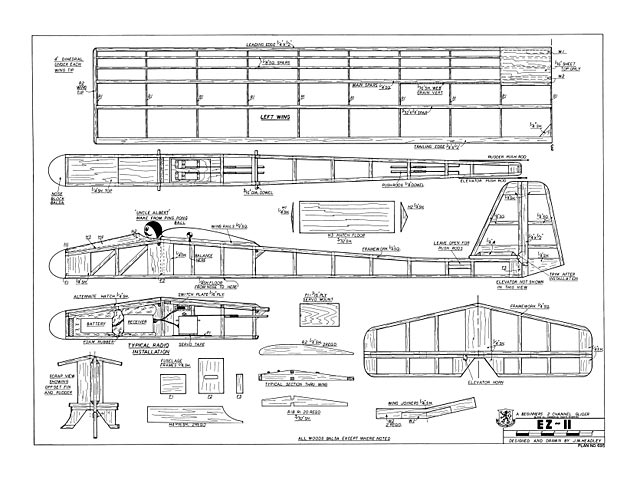 Quote: "Although not quite as elegant as some of the gliders that have recently graced the pages of R/C Modeler, the E-Z II was designed mainly to be E-Z'ily built and, not necessarily, to be E-Z on the eye. However, it has a certain appeal, if mostly to the wallet, but it flies much better than it looks anyway, and that's the name of the game, after all.

This model was actually designed for Lisa, my 10 year old daughter, who had been expressing an interest in learning to fly R/C gliders. I took her request one step further, however, by drawing something so she could also learn a little about building models and, in fact, she did build almost all of the prototype shown here.

When planning the design, I decided that, wherever possible, pieces would be 36 in long, or simple divisions of 36 in, and that no involved wood cutting would be necessary, hence the very simple lines shown on the plan. Most of the model is built from 1/4 in square balsa, and so, if you're planning to build one of these models, it's worth looking well at the local hobby shop's supply, and pick-ing out the better pieces.

As mentioned before, Lisa built most of the structure, and I helped as little as possible; my main contribution being to straighten up a few pieces here and there, and to cut and glue the wing joiners in place. A further item that we discovered during construction was that it proved much easier for Lisa to make pieces using a small hand saw, than by using a knife or razor blade; sawing also providing a straighter and smoother cut. One exception to this was the wing ribs, which are also discussed later in the construction notes and are easily cut using a razor blade and a straight-edge.

Most of the structure was completed during a couple of weeks of evenings, and covering took another two nights - so, if you're looking for a quick project, or something for your children to learn flying on, try our glider - it's E-Z II. This was proven, conclusively, by the prototype built by RCM's Fearless Leader. It's the one shown in the photos with transparent covering and an optional power pod. While he did have far more difficulty than Lisa in building the EZ-II, he did manage to complete it with only occasional assistance from other RCM staff members.

Construction. Wings: As we stated previously, one of the design rules we established was that most major dimensions would be three feet, so it should come as no surprise to discover that each wing panel happens to be 36 in long, giving a total span of 72 in. The only other item that may raise an eyebrow on the experienced builder is the wing rib. Now ribs are usually wonderfully curvy creations..." 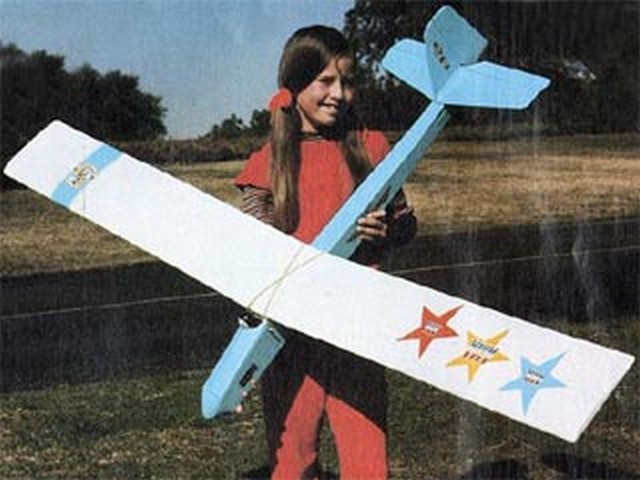