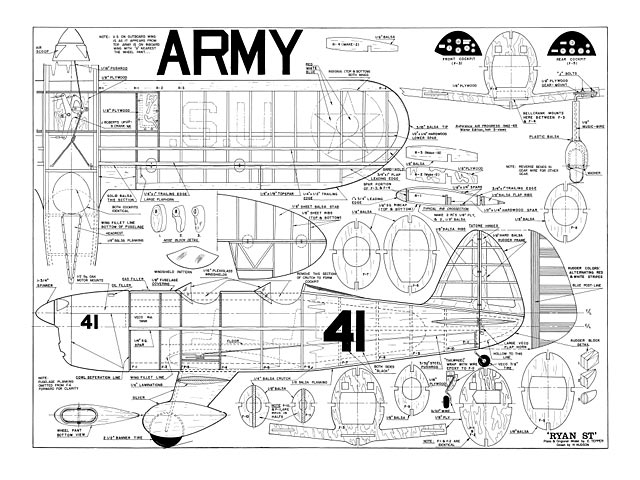 Quote: "For sheer beauty of finish, building and scale details, there is nothing to equal this fine scale control-liner. Ryan ST, by Edward Tepper.

Just before World War II, Ryan captured a design competition for a military trainer with its military version of the 125 hp ST. Thus it became the army's first low-wing primary trainer, breaking a thirty year precedent of using only biplanes for cadet instruction. During World War II, more than 14,000 pilots were trained in Ryan PT's, even now, more than thirty years since its design, you will still find the Ryan S-T catching all eyes at any airport or air show.

Every modeler has a certain plane that he would like to build, but just never quite gets around to it, for me the Ryan. S-T was that plane. What really got me started was an old picture of the Ryan P-T 22, with aluminum body, yellow wings, red, white and blue rudder. Until that time, I didn't know that the military had used an inline engine Ryan for training purposes. The only pictures I had seen were of the radial engine variety. Well, there it was in all its pre-World War II finery, yellows, reds, white and blues, and I just knew that I had to build it.

I had been experimenting with aluminum for quite a while, and this plane, with its fabric wing and tail surfaces, offered the ideal solution. The original model because of the fabric cover weighed in at 5 lbs, 2 oz, and it has been flying just like a stunt plane. After entering scale contests for the past few years, I knew that this plane had to have the full treatment of working parts to compete with the fellows who build scale planes in my area. I started to sketch in extras, such as operating controls, right down to the trim tabs on the elevator and brakes that operate when full up is applied. I found that it was well worth the effort, as the model has won 3 first places and two seconds, the most recent being the Garden State Circle Burners annual Meet, where the Ryan placed first in both beauty and scale.

Of course, the model can be built without the aluminum or the working features for the fellow who wants a terrific Sunday flyer, but if you are after the hardware, then you have to go the whole way. Aluminum used on the model was .012 thick and can be obtained from a sheet metal shop, and is applied with contact cement. Rivet marks were made with a tracing wheel such as women use when making dresses. A K&B, RC engine was used in the original model, as you can see I like plenty of power especially on a windy contest day.

Start construction by cutting the crutch from 1/4 in hard balsa, and fuselage formers F1, F2, F3, and F4 of 1/8 in plywood. Special care must be taken with formers F3 and F4, as these are the base of the model, and automatically give you the proper wing dihedral..." 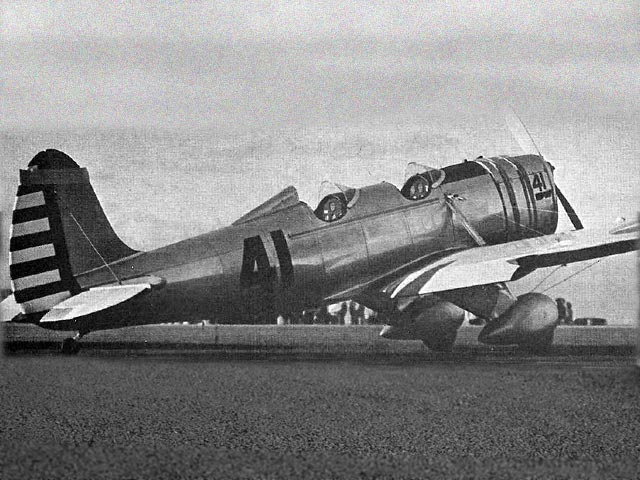