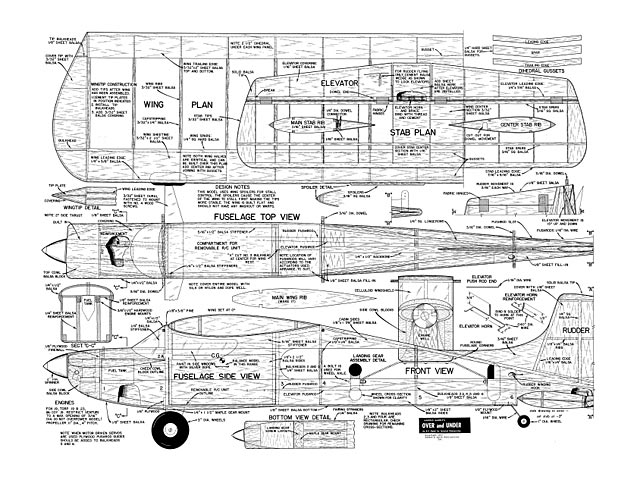 Over and Under. Radio control sport model by Hal deBolt, from July 1954 AT Hobbies For Young Men.

Quote: "Ever since I flew my first control line model inverted I have thought how wonderful it would be if we could do the same thing without lines to hamper the model. This R/C job has allowed me to see the dream fulfilled. Here is the first model flying by radio control to perform all of the C/L stunt maneuvers: inside and outside loops from level flight, real vertical dives, half-mile inverted flight, rolls done at the drop of a hat, horizontal and vertical eights. To top it off, honest-to-goodness tail spins just as they are done with full scale machines! And there is no sacrifice to normal flight, in fact ordinary flying is greatly improved in some respects.

It required only few changes in my basic model design to produce these additional flight characteristics. The model has been worked out to provide the best possible normal flight and still have excellent inverted flight performance. Any major configuration or weight changes would detract from its flight performance. Two things were added to our standard models, then it was just a matter of refinement. First you must have elevator control, preferably trimmable or proportional, although everything but the tail spin may be done with the fixed position types (providing you are willing to practice a bit more). The multi-channel radio systems gave me this control in its finest form. Second and equally important is the symmetrical wing.

The rest of the model is of accepted design, so we will cover the changes made. First of all is the elevator control; without it inverted flight is impossible. You will notice that the elevators are generous in size and that they move through considerable distances. This comes directly from full-scale practice; you need large areas and big movements to change the model's direction quickly, yet smoothly. Smaller areas will allow quick changes but the reaction tends to be slower and the turns more jerky. Good figure eights and loops require the model to turn smoothly in relatively small areas. To move these elevators a powerful actuator is required because they build up heavy air loads under certain circumstances. Servos are highly recommended although an escapement which can use heavy rubber can do the job. Pushrods are another problem; they should be run through several guides to prevent bending under load.

The need for a symmetrical wing is quite obvious. Your model must have the same flight altitude while inverted as when upright. To accomplish this the plane needs equal lift in both positions - only a symmetrical wing will give this. Symmetrical airfoils actually have good characteristics any way you look at them, providing you use them in the best possible manner. The lift obtained from a symmetrical foil is about equal to a flat bottom section and the drag is lower when the symmetrical foil is used at high angles of attack. That very fact is a problem for us, for in order to get equal flight upright or inverted we must set the airfoil at a zero angle of incidence. Unfortunately the symmetrical airfoil offers lowest lift at zero angle of incidence.

The problem was solved in two ways; first it was found that by staying under a 15 oz per sq ft wing loading enough lift could be developed to match a normal R/C model in the glide. Then to help even more the stabilizer was set at a slight angle to force the model into a low angle of attack while flying..." 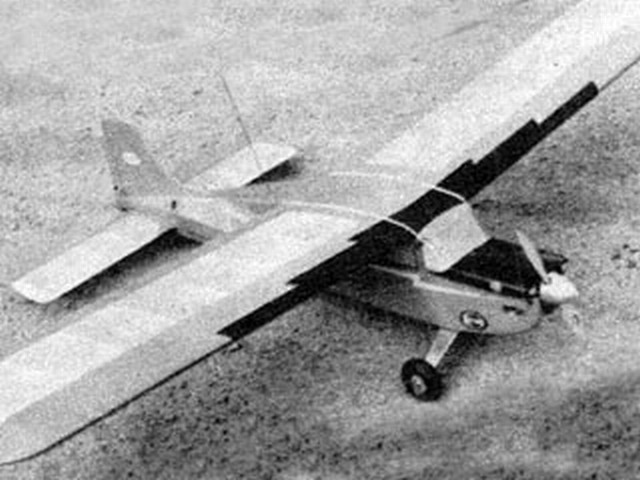