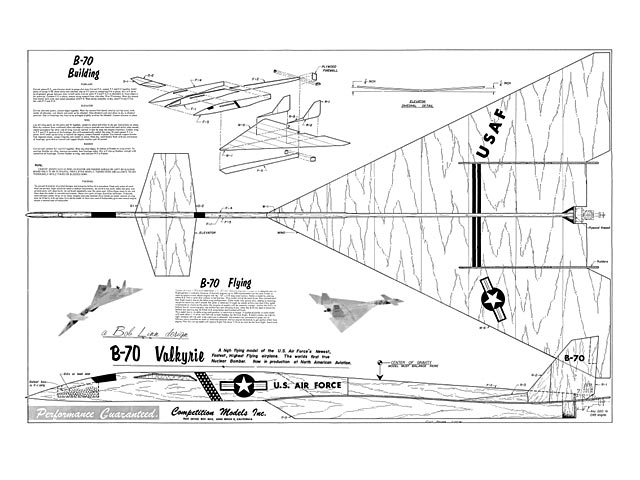 Dozens of these B-70's have been flown with .020 and .024 size engines, this power is adequate and the flight pattern realistic, however if desired, engines of up to .049 displacement can be used if tank is used as engine mount. Mount engine with No. 'O' x 3/8 long wood screws.

Balance the model by placing either B-B shot or split shot sinkers in ballast box. This model will glide much faster than conventional free flight models due to the delta wing configuration. Glide model over grassy area, adding or removing weight as necessary until smooth flat glide is obtained.

It might be stated at this time that if the model is balanced as shown on the plans the majority of models will be correctly trimmed. Anchor the B-B's in ballast box by squeezing glue into ballast box and allowing to dry. After the B-70 has been trimmed the ballast box opening may be filled with scrap balsa and finished off flush.

This model due to its delta wing configuration is sensitive to torque. If pusher propellor is used model will need about 1/16 of an inch left tab on both Rudders for the first flight. If model circles too tight to right increase left tab until wide right turn is obtained.

Adjustments for conventional props are as follows; place propellor on shaft in backward position and run engine backwards to get pusher effect from engine. With this set-up model will require Right Tab about 1/16 of an inch for the first flight. Good Luck. " 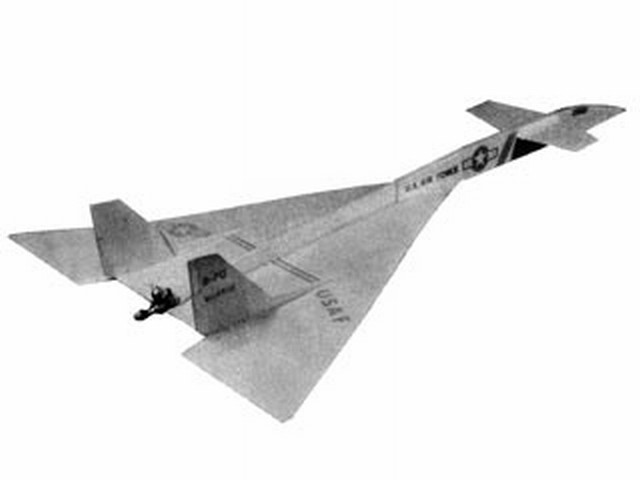 Good Morning from Oklahoma Steve, I built and flew one of these B-70’s with an 0.020 for power back in ’75 while an Aero Engineering Student at Parks College of St. Louis University. Two things I’d like to share: One it’s a three foot long flying SPEAR! Make sure it’s not going to come down anywhere near other people. Two, launch it level, NOT nose up. The wing can and will blank out the rudders. So what you thought was set for a nice turn will take off in a straight line in the last direction it was pointed in. Other than that it was a lot of fun!
ThomasSolinski - 19/05/2015
I flew a Competition Models B-70 back in the mid 1960s that was built by my dad. It flew nicely on a Cox .020 reed valve engine and was eventually lost OOS in a thermal. I've been looking for a quickie, all sheet project for electric power, and due to the nostalgia value this one holds for me, this will be it. A sincere thank-you for making this plan available and the memories!
BobKeller - 20/05/2015
Back in the early '60s my Dad and I built one of these with an .049 on the back. We flew it several times out at Rosamond Dry Lake not far from Edwards AFB. Being a delta it was fast, glide ratio un-powered was pretty steep, but it sure looked neat in the air!! Like the previous commenter stated it was a bit of a powered dart so I had to make sure everyone was watching whenever we launched it. Thanks for making the plan available, I can't wait to make another one!!
DanielS - 30/07/2018
Got bored the other day and put a B-70 together [pic 003]. Neat lookin' ... powered w/ a Cox .020, we'll see how it flies when the weather improves.
Alrob - 12/02/2021
Add a comment