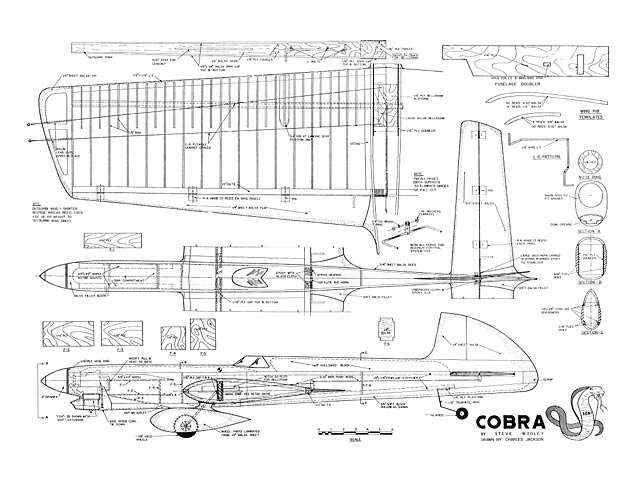 Quote: "COBRA IS my approach to precision aerobatics with a control line model. It is not a stunter - the twin-boom, tri-motored, jet-styled models of the past several years are. It is significant that, while the 1968 FAI Control Line Team selection events were crowded with jet-styled models, it was the conventional aircraft that finally placed one, two, three, four - Cobra was in this group and carried the US colors to Helsinki, Finland, where it finished fourth in the 1968 World Control Line Championships.

Not without a pedigree, Cobra is derived from the successful Argus (oz4885), which I flew to berths on US Control Line Teams twice and which helped bring the title of World Precision Acrobatic Champions to the US teams both times. Built in 1959 and first flown in 1960, Argus is still capable of performing contest caliber maneuvers and has never been altered in any way since its construction. But it is a small aircraft and has shortcomings. Large flaps that provide a slow, smooth turn for the original FAI pattern (no squares) require much effort in AMA contests.

Therefore, Cobra is larger by 80 square inches, has smaller flaps, and a very large horizontal stab and elevator. This ship will turn with anything flying but, since I feel a rather harsh overall pattern appearance is produced by the T-Bird or Shark type of turn, noseweight was increased until the desired kind of turn was achieved. Weight was added by machining a brass crankcase cover for the engine and trimming it until the proper ballast was reached.

I am not a scientific builder. My models could be compared with a bumble bee; perhaps they shouldn't fly, but they certainly do. I use no dihedral or anhedral in the wing or stab, no differential Flap control, no three-bladed props, tricycle gear, or twin engines. I prefer the classic approach to precision aerobatics. Gimmick models may enjoy some limited success, but in the long run the classic ship will far outdistance them.

Cobra is a second generation Detroiter-type design of the Argus, Ares, Atom class and, along with Billy Werwages' Ares (oz4884) seems to be the only model of this lineage enjoying success in recent seasons. However, the present larger Ares of 700 square inches was originally flown with a K&B 45, so Cobra is somewhat unique. It is interesting to note that Werwage has never enjoyed the success with his Super Ares that he had with the normal-size airplane.

Construction. Construction is quite simple. It is assumed that those interested in building the Cobra are competent modelers, so detailed instructions are not needed. Begin by constructing the main spar or I beam. Install the control system and slip on the assembled fuselage sides. Glue the front formers in place and then glue the spar-fuselage assembly together.

Invert on a flat surface and slip the leading and trailing edges into position. Jig up to the proper height and secure. Now begin gluing the ribs in place, always trimming from the trailing edge of the rib, never the loading edge..." 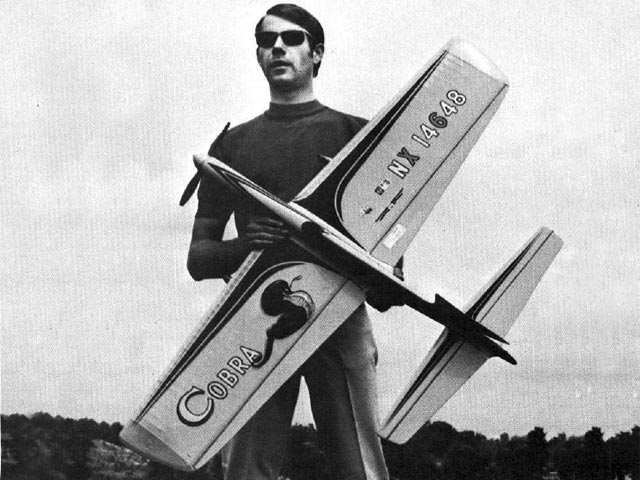