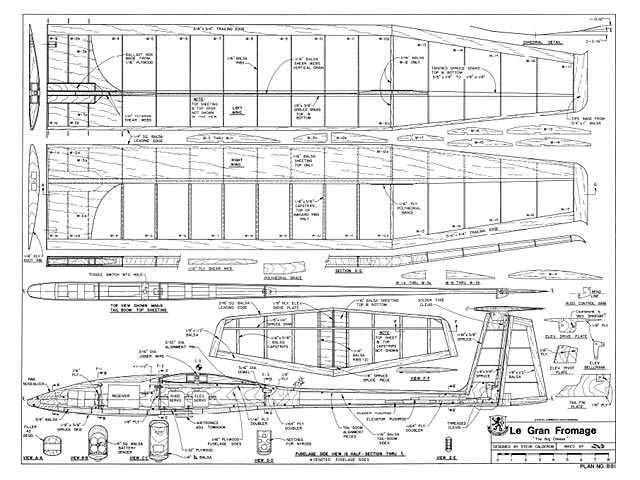 Quote: "In looking for something special in a 2-Meter sailplane, Steve's design gave him the results he was looking for from the high start to the landing. Le Gran Fromage by Steve Calderon.

The story opens in a small truckstop, outside of Winnemucca., Nevada, where a retired hang-glider pilot is intently watching a redtailed hawk through the window. The redtail, circling effortlessly in a boomer thermal, suddenly dives vertically on its prey. In a dazzling display of speed and maneuverability, the hawk sinks its talons into the mouse and invites him home to dinner.

About two years later, the same pilot was at the remote controls of a 2-Meter sailplane circling effortlessly upwards into a blue Bavarian sky. But this mechanical bird thirsted for altitude, not mice. Although not capable of out-racing a hawk, the glider was a delight to watch as it came blasting down out of the sky in a high speed pass.

My introduction to radio control soaring came to me almost by surprise. After retiring from hang gliding with no broken bones, but sad memories of dearly departed friends, I wandered aimlessly through the flying world. With insufficient funds to buy a full scale glider, my glider lessons were only partially satisfying. Then it dawned on me. Where did those graceful model gliders that I used to share my airspace with at Pacifica and Fort Funston, California, come from? Why hobby shops, of course! I ran off to buy an R/C glider without really knowing what to buy.

I'll admit my first glider, a 99in Wanderer (oz6201), was a good trainer, but that was about it. In my search for performance, I scratch-built a Windfreak (oz5725), and I got exactly what the designer said I would - high performance and no time to relax while flying it. A beautiful Graupner Cirrus (oz8532) found its way into my collection next, but it didn't have the maneuverability or speed I was looking for.

It wasn't until I was reading a borrowed copy of 'Radio Control Soaring' by Geoff Dallimer and Dave Dyer, that I stumbled upon an interesting quote in chapter 15: The design of model gliders is far from difficult, and most keen modelers will wish to try their hand at this aspect of their hobby. Blimey! I thought to myself - I'll invent one.

From the onset, I decided not to worry about Reynold's numbers or drag coefficients, etcetera. Instead, I would concentrate on a clean aerodynamic shape with a carefully thought out airframe. After all, there was enough to worry about, what with wing area distribution, cantilever ratio, tail moments and all. Engineers have a habit of burying themselves with details and sometimes don't see the overall picture. Knowing what I wanted the finished product to do made the design problem easier. After a suitable gestation period, a design was put down on paper. As is my wont, I chose the whimsical name Le Gran Fromage (the Big Cheese) for my 2-Meter creation. A few weeka later the prototype was tested on a bluff south of Big Sur, California (one of my old hang gliding haunts).

I'll never forget the thrill of the first flight. The Fromage didn't do anything nasty. It went up on the high start smoothly, cruised around nicely, and I got it down in one piece. I probably would have cried if I'd splattered it on the maiden voyage. The following months saw dozens of test flights back in San Jose, California, as the inevitable sorting out process continued: There were also requests for plans from impressed fliers.

At this point, I decided to make my contribution to the sport by documenting my design. However, when confronted with the prospect of redesigning something, I invariably find ways of improving it. The final version has a lengthened body, a redesigned tail group, and the wing sports ballast boxes as an integral part of the spar. I drew a new set of plans in ink, and then I commenced construction of the second airplane with the help of my ol' flying buddy, Mike Pahang. Also to inject a sense of urgency into the project, I had a deadline to meet. The 4V2 month trip I was-planning to Europe meant that the entire project had to be completed by May 1980 (including shipping case).

The second Fromage took its maiden voyage in Munich's Englischer Garton. Since I knew how it was going to fly, it was a more relaxed flying session. Unfortunately, I couldn't answer the polite questions from the curious local folks since I didn't speak German. They enjoyed watching it fly inverted, and when it was on the ground, I attemped to explain how it worked. The only flying problem I had was that the Fromage gets hard to see when it's a long way up because of its small size. The two-piece wing and easily removable elevator were handy for transpor-tation, since I had to rely only on public transportation during my three' months stay in Munich.

As it stands now, the Fromage has delivered the performance I wanted. It is by no means the ultimate airplane, but it has a lot to offer to the competition pilot in terms of handling and speed. You've really got to be cooking to flutter the wings or peel them of of this plane, not to mention the elevator. I have not fluttered anything on my plane yet and I have a tendency to make high speed passes on my landing patterns. The raised entry airfoil and thin wing combine with the minimal frontal area of the fuselage to allow for good penetration. Yet with the powerful elevator and rudder, you can keep the Fromage from wandering around as it cruises in light lift. If you're tired of floaters, as I was, then the recipe that follows will allow you to cook your own Le Gran Fromage... " 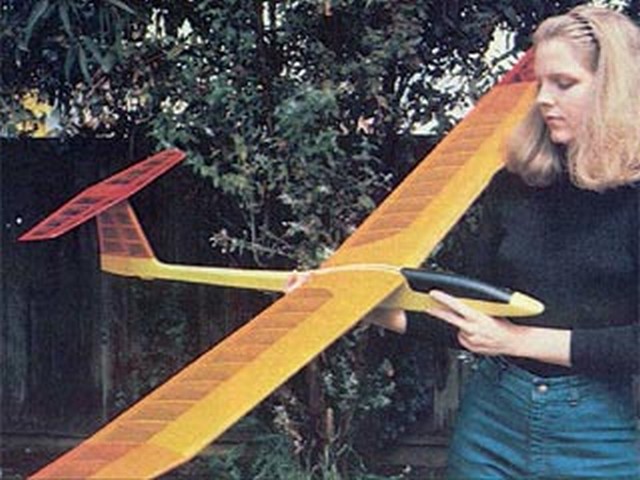