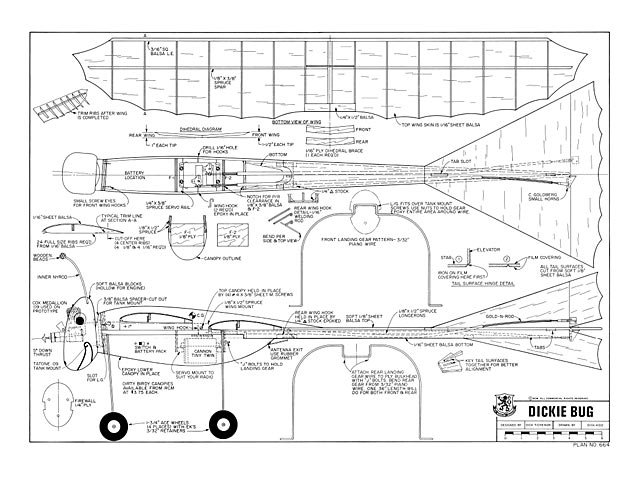 Quote: "If you're really looking for a different approach to an RC aircraft, this is for you.

Here is a refreshing change of pace from the run-of-the-mill R/C models. Would you believe the design was sparked by inadvertently placing two Dirty Birdy (oz4915) canopies together so that they resembled the body of an insect? A bit of imagination did the rest.

The Dickie Bug's first flight was made with more than usual conjecture as to how this configuration would perform in flight. Luck was with us as it was very stable, while being extremely maneuverable. The tandem wing arrangement works as a slotted wing at high angles of attack which appreciably de-lays any stalling tendencies. It certainly has been fun to fly, fascinates spectators, and inspires comments that make a most enjoy-able flying session.

Thanks to cyanoacrylate adhesives and 5-minute epoxies, the bug was a snap to build. Except for sawing out the 1/4 plywood bulkhead, the entire aircraft was built on my office desk. Keeping Don Dewey from finding out what I was doing was something of a challenge because he thinks I am supposed to be working all the time.

Start construction by sawing out the 1/4 plywood engine mount bulkhead and drill for the Tatone tank mount. Cut a 3/32 diameter x 36 in length of music wire in half and form the landing gear struts. The front strut will be held in place by the nuts on the engine mount screws. Cut slots in each of the 1/8 x 1/2 spruce longerons to accept the front landing gear. Epoxy the longerons to the bulkhead being careful to include the down and right thrust line offset. Next, epoxy the 1/8 plywood servo mounts to the spruce longerons. When that has set-up, pull the aft ends together and epoxy. Then glue the upper and lower sheeting to the tail boom. Add the 1/8 x 1/2 x 6-3/8 in spruce wing mount with the upper edges slanting inward about 1/16 per side. Now you can trim a canopy and epoxy in place to make the bottom of the fuselage. I used the Dirty Birdy canopy because we have them at RCM to supplement the Dirty Birdy construction article. You can use some other size or shape canopy if it suits your fancy, as the Dickie Bug is for fun anyway.

The tail surfaces are made of soft 1/8 sheet balsa. I have a habit of cutting out tabs and slots on parts for alignment purposes, it works well for me and is shown on the plans. I like to use the covering film for hinges on small models. My method is also shown on the plans. I have found that it is much easier to cover the tail surfaces before assembling them. Now for the wings. Glue together soft 1/16 sheet balsa to make 4 panels 5 in x 16 in. Trim the 4 panels to the outline shape shown on the plans. Mark the spar location on each of the panels. Be sure to make 2 left and 2 right hand panels..." 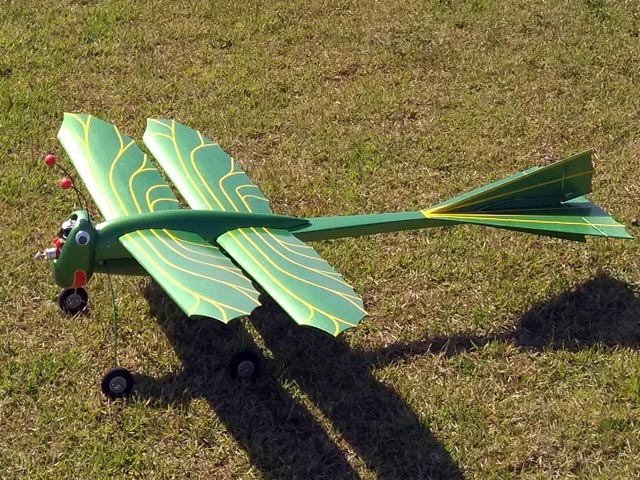