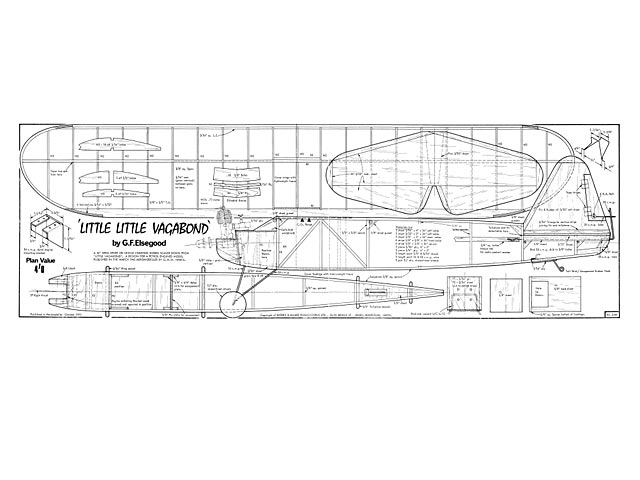 Quote:- "HAVING had great fun flying Sharkface (oz4416) type single channel radio controlled aircraft, the designer decided that it was time to build a more restful model. Those little models which flit through the air at enormous speeds and with horrifying antics hardly help one to relax! The question then arose as to what sort of model should be built - and as usual the Aeromodeller provided the answer.

Looking back through some war-time issues, the Little Vagabond (oz1051) design was rediscovered - being a 45in span model designed for a 2 cc petrol engine by GWW Harris in 1945. Naturally, this was a free-flight design, thus being inherently stable, but also it had been designed to carry a heavy payload, necessitated by the batteries and coil, etc needed by a 'sparky', as well as a mechanical timer. Having an elderly, but good condition Mills .75 cc, the designer decided to build a scaled down version of this model to suit his engine and R/C equipment, which would still retain the character of the original vintage ship.

Naturally, the model may be flown both free-flight and with radio. The DC Dart diesel or any of the lower powered. .049 glow motors should be suitable for the radio version, while the Cox Pee Wee or even the home-built Topsy diesel, should be adequate for sport flying. This model should fly sedately at a leisurely pace - a high airspeed would be quite out of keeping with its nature!

Originally it was intended to follow exactly the construction of Harris's design, but knowing the hard life of single channel models, sheet balsa was used for the tail surfaces, and laminated wing tips.

Start the fuselage construction by making two pairs of fuselage sides. Pin the spruce langerons over the plan, and add the 1/8 in square balsa spacers, plus the 1/8 in sheet front fuselage sides, noting the grain direction. Add the gussets, escapement rails and 1/8 in sheet doublers to former F4, and remove from plan. Repeat for the other side - noting that it is opposite handed! Cut out formers F1 to F4, then glue in place F4 and the cross braces located at the rear wing dowel - checking for squareness. When quite dry, join the fuselage sides at the rear and insert the remaining spacers..." 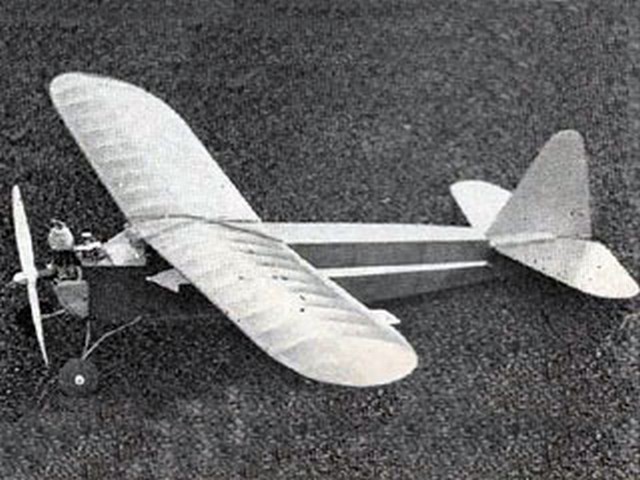