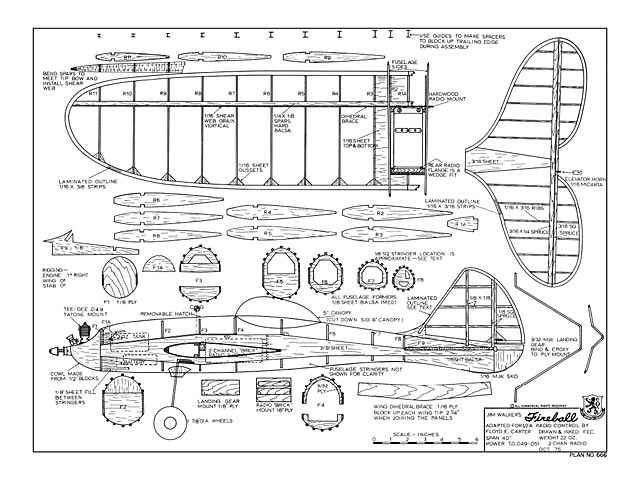 Quote: "Designed in the 1940s by the legendary Jim Walker, the Fireball (oz5746) was one of the most popular Ukies of all time. The Half-A RC Fireball takes advantage of two very popular directions RC flying seems to have taken: The Old Timer movement, and Half-A Pattern. The RC Fireball exploits the best in both of these interests. Those of us who grew up with the Fireball, and others like it, will agree that these models must not be forgotten. Indeed, the Fireball is a thoroughly 'modern' plane with pleasing lines and moments ideally suited for RC flying.

The time is 1944. The place is a weed covered vacant lot next to a hobby shop in suburban Los Angeles. I, and several of my pals had ridden our bicycles there to witness a well publicized flying demonstration by a man named Jim Walker. In the waiting crowd I recognized all of our local flying personalities. Standing over on the sidewalk, flanked by his admiring followers, was our own ace-of-aces. He had recently looped a control line model, a performance which elevated him to immediate superiority. (I was certainly not in his league, as I had yet to complete a flight without crashing.)

In a while a large station wagon arrived. The man named Jim Walker began his show. Out of the car came a red Fireball. He easily started the 0 & R 23 and walked to the center of the vacant lot. Holding the plane at arms length, with a U-Reely in his other hand, he tossed the Fireball away. It flew almost straight out trailing wires un-winding from the handle-reel. Then the plane began to fly around the circle, with the lines gradually getting longer. After about 50 feet of line had been reeled out the Fireball looped several times and was suddenly flying upside down! No one in our club had ever flown upside down, not even our great ace pilot! After an amazing series of stunts, Jim Walker began to reel in the lines, turning ever faster as the circle became smaller. Then mushing the Fireball into a near stall, he reached out and picked the plane out of the sky.

There were other marvels that Jim Walker performed that day, but my mind was still busy re-creating that wonderful Fireball flight. Although I cannot boast of having known Jim Walker personally, I was able to see him fly on later occasions, both control-line and R/C. A whole new generation of modelers has appeared since that time who only know of Jim Walker through the model publications. The Fireball is just one example of the talent and creativity of this man whose achievements were legion and whose dynamic energy seemed to be limitless.

The time is 1975. It is the year that 1/2A R/C pattern models caught on. Modelers have been flying small R/C models for a long time, but these early designs seemed to be stuck in the trainer mold and were, therefore, sport free-flight designs with some radio assist. The new, smaller radios proved to be the catalyst that was needed to trigger the development of this new dimension in R/C modeling. It seemed a fitting tribute to Jim Walker to combine this recent de-velopment with a design which caused such a sensation in the early forties. With the help of 3-views and a good memory, the Fireball project was underway.

Those who remember the Fireball, or who may have one in the attic, will discover that the construction of this version is quite unlike the kit version. The kit featured a carved balsa fuselage which one was cautioned to thin out somewhat. This cannot be used in the 1/2A version because light weight is the very key to success of these small models. The construction features a lot of little sticks and very little sheet wood. The goal is to get down to a flying weight of about 22 ounces. This type of construction is more work than the conventional sheet balsa fuselage and foam wings, but the payoff is in the snappy performance that is a unique characteristic of these 1/2A pattern models.

A few other familiar R/C construction practices are abandoned in this model. The wing is permanently attached. It is a mid-wing design with not too much dihedral and no ailerons. This removes it from the trainer category, but it is easy enough to handle once you get used to the incredible speed and turning radius.

Construction. The laminated outlines are really worth the time and effort. This is a standard way to build small, light models, but should also be considered for other modeling projects. Begin by cutting the forms from plywood, or heavy cardboard, to match the inside curves. Strips from 1/16 sheet are cut 3/8 wide for the wings and 3/16 wide for the tail parts. Soak the strips in hot water for a few minutes. While they are still wet and soggy, coat with Titebond and bend them around the form while taping them in place..." 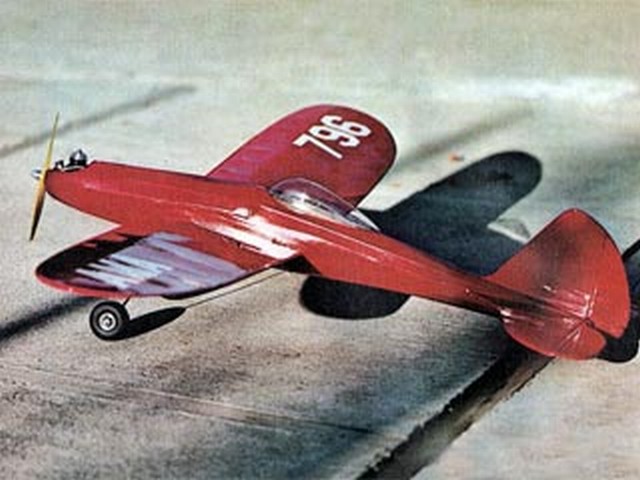