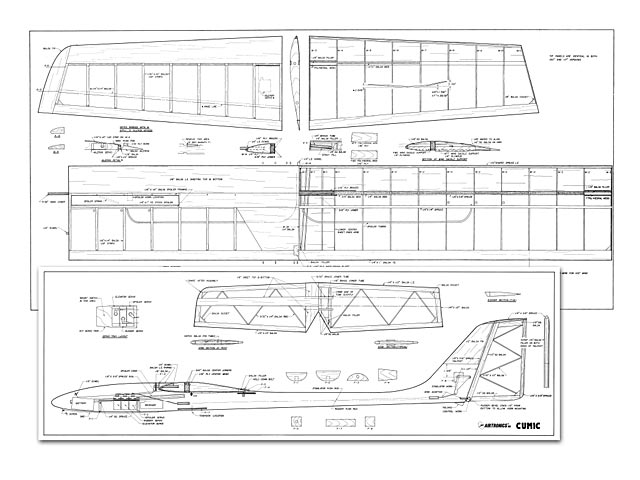 Cumic Plus. Radio control sailplane. Based on the Sagitta 900 (oz5950) but with several improvements including a fibreglass body, so there are no fuselage formers shown on this plan.

Quote: "Since the introduction of the Cumic, there has been a growing demand for a larger open class version of the airplane. In response to this demand we have introduced the Cumic Plus. This kit now contains all the materials necessary to build either a 100 in span Cumic or a 117 span Cumic Plus. The fuselage, tail assembly, and tip panels are identical for the two planes, with the only difference being in the wing center sections.

The kit includes 36 in long material for the center leading and trailing edges, wing sheeting and spars. If you are planning to build the 100 in Cumic, all of these pieces should be cut off to 24 in, To build the 117 in version simply leave the stock 36 in long. The building sequence is identical for the two center sections other than the different lengths of the stock.

The choice of which version to build is up to you. With its greater span and higher aspect ratio, the Cumic Plus is the better all around performer, so it is the one we would opt for. If you want a standard class ship or don't want to deal with a six foot long center section, then the Cumic is for you. Either way you will wind up with a truly excellent sailplane.

Introduction: The Cumic has been designed to be the highest performing thermal sailplane on the market today. The Cumic is based on the highly successful Sagitta 900, with several improvements that were suggested as people gained more experience with their Sagittas.

First, the tail moment has been increased and the stab section thickened to improve pitch response characteristics. Second, the fuselage cross-section has been increased to allow the use or larger radio components and permit them to be mounted farther forward to make balancing easier.

The wing has been changed to a three piece design with a one piece, bolt-on center section for increased strength to withstand zoom launches. The spoilers have heen moved outboard one rib bay to prevent them from blanking out the stab when they are deployed.

Finally, the Curmic features a fiberglass fuselage to eliminate all the carving and shaping of the Sagitta's wood fuselage.

These changes, combined with the proven performance of the Eppler 205 Airfoil, make the Cumic the finest flying thermal sailplane we've ever produced..." 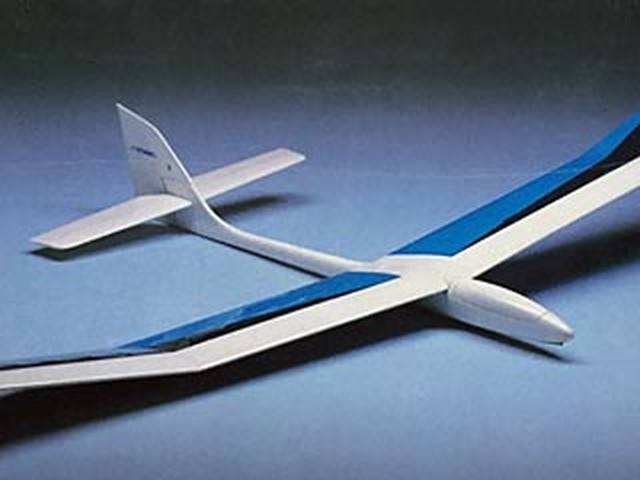 It would be interesting to know if there is a currently existing mold for the fuselage. Perhaps someone out there can pipe up with any relevant info.
JimO - 06/05/2015
Look at the Sagitta900 plan. I use a built up wood fuselage which the glass one is based off of. You would have to work the wing saddle area but its very doable. I think the best combo would be the Sagitta900 fuse and the wings and tail of the Cumic.
orbitalair - 11/05/2015
I've had a Sagitta 900 and a Cumic. I much prefer the Sagitta, although maybe that has something to do with the kit wood, especially the wood used in the tip blocks? I know people like the Cumic Plus, but I don't understand how it can fly right with 17 inches more span, but the same fuselage as the Cumic.
Lincoln - 25/08/2015
Add a comment