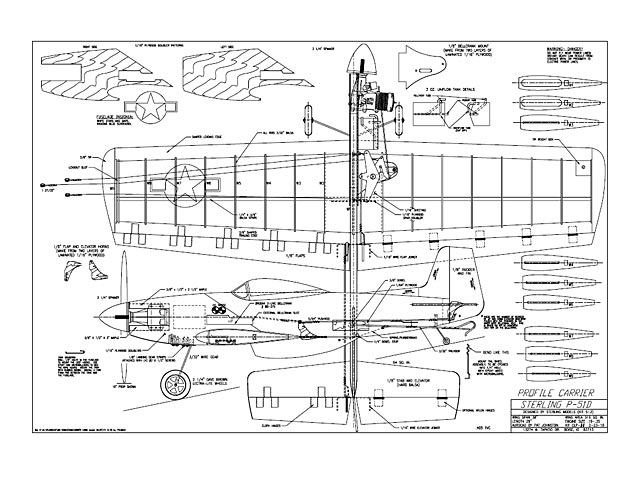 Quote: "We Test: The Yak and the Mustang, by Don Grout. Two semi-scale Sterling kits designed expressly for combat flying breeze through a rugged test routine. For good measure the test pilot's report gives the run-down on combat rules as developed for both the Mirror and at the Plymouth finals.

Spectacular to fly and watch, combat is proving a real crowd getter. It injects not only the elements of building and flying but also of competition and chance. One contestant competes physically against the other, not against time or comparative performance. Combat can be flown by the average flier in a parking lot, flying field or back lot. In one extreme case of combat flying, six ships were in the same circle with every man for himself. At the Mirror Meet this year, it created tremendous spectator appeal all day, with everything from sensational exhibitions of attack and maneuvering to belly crashes and dive-ins by over anxious contestants, to a mid-air collision.

Sterling Models of Philadelphia has now put on the dealers' shelves, the F-51 Mustang and the Russian Yak-9, a natural combination for combat flying. They are both similar in type and simplicity of construction, but present quite a different appearance when finished.

The Yak has a rounded wingtip while the Mustang is a square wingtip ship. The tail and rudder are the same. Although both have an under wing air scoop, the profiles are quite different and make an eye catching and snappy flying combinations.

For 'We Test,' we wanted to fly both the Mustang and Yak-9. Loop Holomany, a control-line enthusiast since the Brown engine days, built the Yak while Yours Truly built the Mustang. Both are profile fuselage types with operating wing flaps. Designed for A, B and C displacement engines, the wing span is 38 in on the Mustang and 40 in on the Yak. Both have tapered wings with an 8-1/2 in average chord, including flaps. The difference in wingtip design gives practically identical wing areas. The kits are highly prefabricated. The body is completely cut out. The wing is of a shaped and notched edge construction with die stamped ribs. The main spar is 1/4 x 3/8 with solid wingtips, and a center rib section, sheeted top and bottom for strength. Tail, rudder and flaps are die stamped. Plywood reinforcement is used in the nose, as are hardwood motor mounts. There are plywood control horns, formed wire flap and elevator joiners, and landing gear. Also large insignia decals and the usual Sterling detailed, step-by-step, easy to follow plans and instructions.

For 'We Test' both ships were powered with K & B 29's. A 32 or 35 displacement engine would not be too much. The ships would fly well with hot 19's but don't forget, if you're competitive minded, you'll have to compete with the larger engines. K & B 100 fuel and Top Flite 10-6 props were used although other brands of fuel and props could also have been used. Combat rules, of course, call for 60 foot lines. The plans show how to make a tank. We used a commercial 3-1/4 in long wedge. The Mustang weighed just under two pounds ready to fly and the Yak slightly less.." 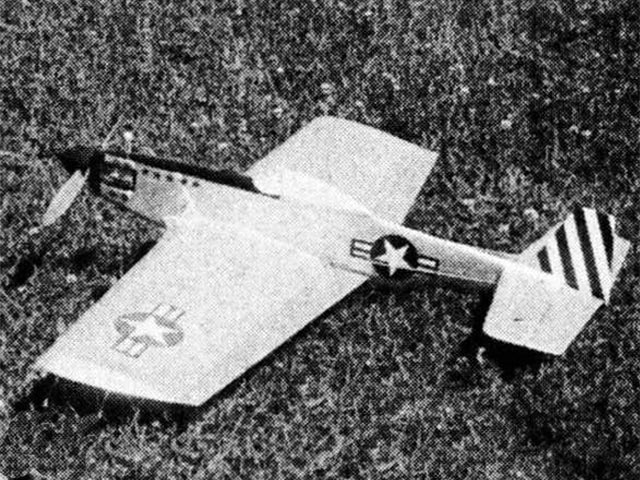