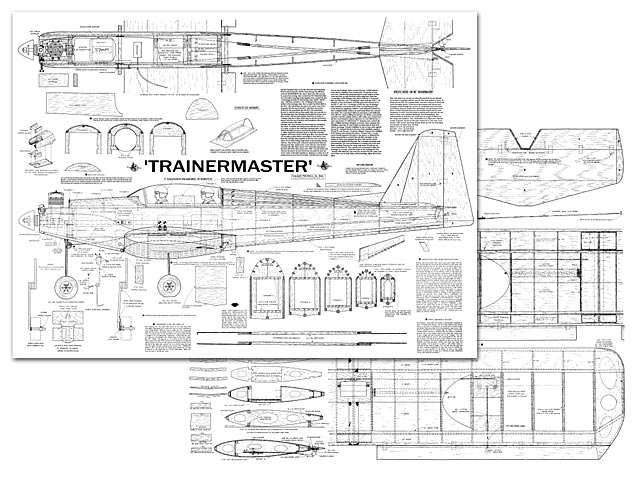 Tremendous combination of excellent plane, reliable equipment and powerhouse of an engine makes for a good Field and Bench. MK Digifour proportional equipment never missed a beat, author wrung out by plane which really moved around the sky.

In a Field and Bench by Bill Northrop a year or so ago, he had a short dissertation on 'which came first, the chicken or the egg' as it relates to the model airplane and the control system. The question was resolved by virtue of the fact that this magazine is Model AIRPLANE News; hence the airplane first. Therefore, based on the same logic (?) and also the title of this article, the 'field' portion will precede the 'bench'; besides it only happened a few days ago and is much fresher in my mind.

The field is the WRAM Club flying site and the subjects are the Trainermaster, powered by a Veco 50, both of which are controlled by an Aristo-Craft MK DigaFour proportional in the trembling hands of a balding, Sunday flyer fresh from a five-month winter hibernation.

At the insistence of Walt Schroder the maiden flight was delayed until he felt that he had enough photographs of the ship (no confidence in the pilot). Picture-taking complete, the moment of truth was now at hand - the engine was fired up, the plane was taxied a bit, and 'the coal was thrown on.' At this point, the fact that the plane is designed to rest generally parallel to the ground made itself apparent in that the model took off smoothly, instead of 'leaping' from the ground as do planes with a nose-down attitude.

To say that this plane is responsive does not do it justice - at the suggestion of 'MAN At Work', a snap roll was tried, and before I could regain my composure and close my mouth, the model had completed two and one-half. Needless to say, the axial roll rate is excellent and the fully symmetrical airfoil makes inverted flight a simple matter. The other basic maneuvers were tried, and hear me well, this plane is capable of performing the full pattern. The mention of 'hearing well' brings to mind the fact that the WRAM's have a muffler rule (we are tired of losing fields), so a muffler from B&N Model Accessory Co (94 Cedar Dr, Plainview, NY) was employed on the motor. This unit is quite effective in silencing the engine; in fact, the .50 with the B&N was noticeably quieter than other engines with stock mufflers.

The manufacturer of the Trainermaster kit advertises 'maximum training in minimum time'". Well, with the pushrods located in the inner holes of the control horns, and a .50 howling up front, that training course is REALLY accelerated. However, subsequent flights with the devises located so as to reduce the throw of the control surfaces, and the motor at about three-quarter throttle, the Trainermaster will still perform the pattern and in so doing, permit one to enjoy the flight characteristics of this plane, and work back to the maximum surface throw at a leisurely pace.

I should add that during the aircraft's baptism in fire, the Veco 50 proved itself as an excellent piece of machinery, particularly in the idle department, and what more can be said of the DigaFour, other than it did not glitch, and the range is far in excess of any flight requirement.

This particular Field and Bench had its inception one afternoon in mid-December, and almost met its demise (at least for me) on Christmas morning. I was oblivious to the complete lack of enthusiasm displayed by my wife, Shirley, when I informed her of my agreement with Walt Schroder. On Christmas morning the reason for her attitude became quite clear as she presented me with a kit as a Christmas gift. Fortunately, I have a very understanding wife; she only referred to Walt as a 'Grinch' (Dr Seuss' character who stole Christmas) for about a week. I bring this incident up for several reasons. To prove to nonbelieving modelers that wives can be forgiving when it comes to the hobby; and don't splurge in the local model emporium before the holidays, birthdays, etc, at least without getting some sort of approval from the 'powers that be.'

Back to the business of benching the products - as you can readily see from the photographs, the Trainermaster is one of the new breed of competition-sport models in that it does have a semi-scale appearance, and is the type of machine that when in flight will hold not only the attention of the pilot, but the spectators as well. The Trainermaster, which is designed and kitted by Lou Andrews of AAMCO (Andrews Aircraft Model Co Inc, 2A Putnam Court, Danvers, Mass) is an airplane that fills a very important void in the general run of model kits that are available; this void being the intermediate, ie that model between the standard .60 machine and the new .19 sizes.

This medium size has many of the advantages of the smaller configuration, while still being able to handle an installation of the standard size radio equipment, which most of us still utilize. This size also permits one to resurrect some of those medium size engines in the .35 to .45 range. A look at the specifications of the Trainermaster will further indicate the advantage of this size model.

List price of the kit is $29.95, which is quite a bargain, particularly when you consider the contents of the box. The balsa wood is definitely premium grade and certainly of superior quality. I can recall finding only one piece of wood that was not useable, and that was a piece of sheeting which was thin near one end. The die cutting and precut balsa and plywood are excellent and very complete; the ribs even have lightening holes. Plywood is beveled where necessary, and shaped and fitted blocks are provided.

The hardware package is average in so far as its contents are concerned; main landing gears, nose gear, mounting brackets, retainers, etc. As is generally the case, you have to purchase pushrod wires, devises, bell cranks, and some control horns.

One cannot help but be impressed by the plans. They are full size, well drawn, and quite complete. They include step by step instructions and an additional sheet of construction and completed model photographs.

In addition to the aforementioned comments on the kit, perhaps the most outstanding feature of this model is the basic structure engineering. By that I mean that the plane can be built accurately without the use of wing jigs, etc. One needs only the old standby - a flat building board..." 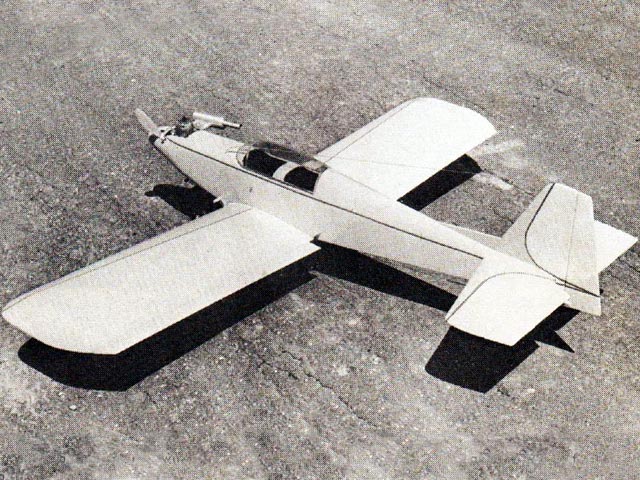