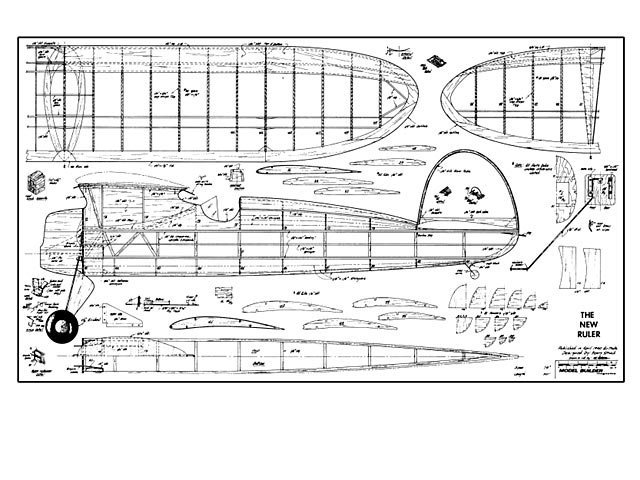 The New Ruler (oz534) was first published in April 1940 Air Trails. This here is a later redrawn plan from Model Builder 10-82, drawn by Al Patterson.

Probably no one in history has designed more significantly popular and trend setting model aircraft, during a long modeling career, than Henry Struck. There have been so many, in fact, that it's difficult to pick out the best of the lot. One way to make it less difficult, would be to sub-divide his designs into various categories; gas, rubber, duration, scale, sport - did he ever really get into control line?

If there was ever a fault to find with some of Hank's designs, it might have come from his refusal to compromise the functional and esthetic features of a model in order to simplify the construc-tion. In other words, it would seem that he first conceived the aerodynamic requirements of a model, then sur-rounded it with esthetic lines, and lastly, figured out how to build the thing to come out as he planned it! It wasn't always easy, and the KGS (oz5417) might be considered a prime example of this theory - not too many copies of this classic design have appeared since it was first published.

One design that did not deter even some of the less energetic competition model builders of the period, was the New Ruler. Although a little tricky to build in spots, hundreds of New Rulers showed up at contests soon after plans appeared in the April and May 1940 issues of Air Trails.

Struck designed this model to meet the new NAA gas model rules for 1940; a model must weigh at least 80 ounces for every cubic inch of motor(s) displacement. This, and the eight ounce minimum weight per square foot wing loading, pretty much dictated wing area and total weight once the engine was selected. Strucks' resulting design was thus aptly named, the 'New Ruler'.

In his April 1940 article, Struck went on to say: Aerodynamically, stability is most important. A model should climb evenly and in circles to avoid a dip when the engine cuts. During the glide the circle should be constant, without any tendency to waver or 'crab.' The model should not be critical to adjust, and any slight accidental change in setting should not bring on disaster.

A parasol wing will keep the nose up and magnify the desirable effect of a polydihedral wing. A large lift stabilizer will dampen the nosing-up tendency of the parasol before a dangerous stall results. The area of the rudder and the rear of the fuselage are vital to spiral stability. If the area is too small the ship will whip suddenly into a tight spin. If too large, the ship will tend to remain in whatever position it assumes, with the possibility of either a straight loop or a tightening spiral. From experience we have found the best position of the CLA (center of lateral area) to be about one fourth of the fuselage length behind the CG (center of gravity).

The construction of the ship would permit the various structures to be easily lined up without sacrificing cleanlining. Every part should be quickly demount-able for transportation and shock absorbing. The entire engine unit should be available for instant checking, i nclud-ing the important flight timer mounted in a handy position, for setting or release when the model takes off.

All these ingredients have been incorporated in the New Ruler. The consistent performance of the ship has demonstrated them. Powered with a 'hot' motor the climb is amazing, turning in an average duration in dead air of 2-1/2 to 3 minutes on a 20-second engine run. But its 'riser-haunting' glide minimizes the advantages of even great power, making the New Ruler a constant threat under any conditions." 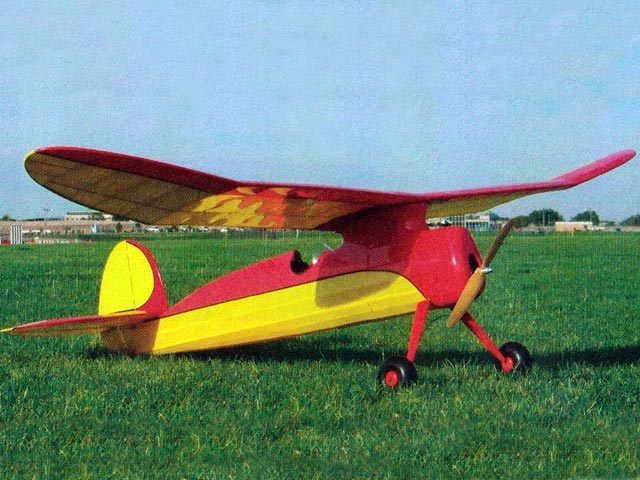