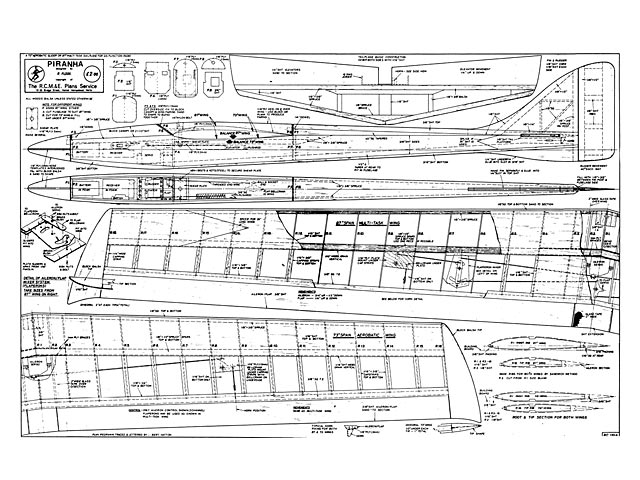 Piranha. Radio control slope soarer. Note the plan shows the plane with two different wings: 87in for multi-task sailplane, or 73in for aerobatic glider.

THE objectives in mind whilst designing Piranha were to produce a model that would be suitable for practically all the sport and contest flying I would be doing. and to make a model particularly suitable for the Multi-Task competition run by the West Mendip Soaring Association, of which I am a member. Although this type of contest is at the time of writing unique, the combination of aerobatics, speed and cross-country tasks dur-ing one flight does demand a true general soarer. I believe PIRANHA matches these demands by combining two alternative wings with a common fuselage and tail unit.

The 87 in span (multi-task) version comprises of a semi-symmetrical wing section and full span flapperons. Use of the flaps (independent of elevator) enable the characteristics of the model to be changed in flight, to soar efficiently (flaps down), for normal aerobatics (flaps neutral) and extra speed (flaps reflexed ). Its acrobatic performance is not harmed by omitting the flaps, it will still perform outside loops and inverted flight easily. Because of this the addition of flaperons may seem to some to be an added complication, but when the lift dies on a fine summer evening I wouldn't be without them.

The 73 in span (aerobatic) version utilises a fully symmetrical wing section and 3 function R/C controlling ailerons, elevator and rudder. Normally this model is only asked to perform aerobatics in good conditions, if the lift is light I resort to the 87 in wing. If you consider building the 73 in version and use it as a general soarer I would recommend the addition of flaperons, linked as in the 87 in version, which will extend the flexibility of the model. Piranha 73 is fully aerobatic, manoeuvres such as 4 point rolls, cuban eights, consecutive out-side loops, etc all being possible. The combination of sweep-back and the larger than average span provide the model with a smooth flying performance, which l consider to be as important as its acrobatic capability. 'Smooth' pattern flying is now being recognised by contest judges, especially in the West Mendip Soaring Association where a continuity mark is given on completion of the flight. This mark is the judge's overall impression of the flight, aimed particularly at the flight pattern between the manoeuvres.

Construction. General. The construction of Piranha is straight-forward. and results in a strong, attractive and streamlined slope soarer. Spruce leading edges have been used on wing and tailplane, as on Crook Peak we have an abundance of tough (and burnt) gorse and stones which can easily dent the leading edge and affect both looks and performance.

Time spent on careful selection of wood and accurate construction will be repaid with interest when the first flights of Piranha are made. Construction is fairly conventional but as Piranha may appeal to those who have mainly built from kits, I shall go through the construction in sequence. In practice construction can proceed on all the component pails of the model simultaneously, but for the sake of continuity I will treat each section separately. I like spending the first couple of evenings 'kitting' the model, so that on assembly all pieces are ready cut to fit properly. I use a fast setting white glue for most wood joints, epoxy for metal to wood and contact adhesive for the leading edge sheeting. Balsa cement is also useful when covering, and in fitting the tailplane to the fuselage..." 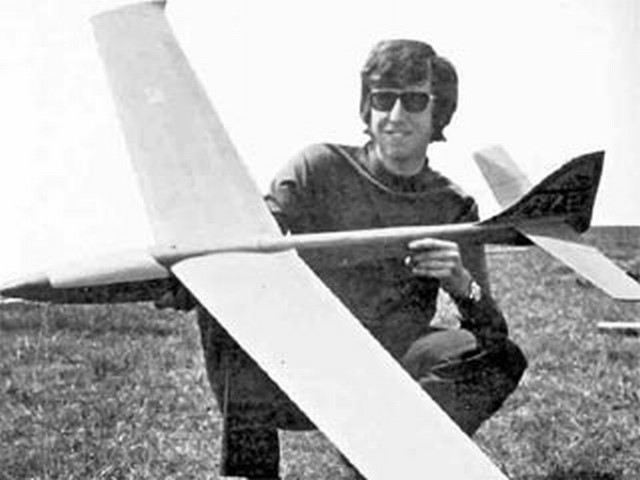