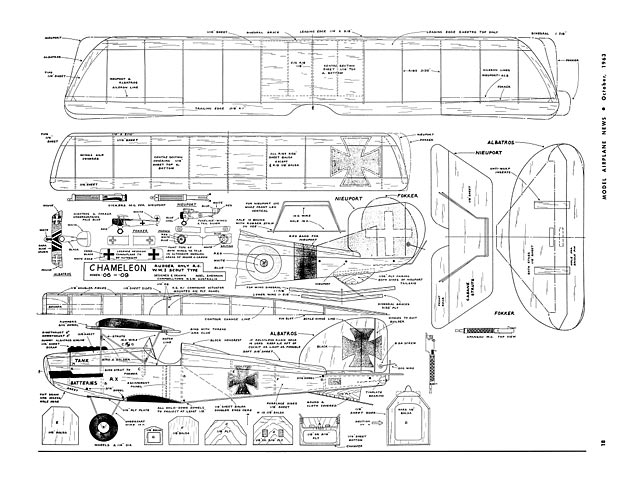 Quote: "A three-for-one project from down-under. Our Australian author's use of semi-scale permits three WWI planes from one design. Chameleon, by Noel Shennan.

In the world of ships the white sails gave way to steam; in the air the flying vacuum cleaners took over from the piston jobs. As the steamships can't match the beauty of sail, somehow a gleaming jet doesn't have the same atmosphere of period that the old piston aircraft had.

Being a devotee of World War I it was natural that after my first radio job proved reasonably successful I should think anew about putting radio in Camels, Pups and perhaps an Albatros. Radio veterans promptly poured cold water on the idea, so I decided on a semi-scale that would have the appearance of the ship I wanted and flying qualities more usually associated with sports jobs.

Checking scale plans brought out many points of similarity in some 14- 18 Scouts. Small lower wings, with spans and chords alike and the wing, cockpit, and undercart positions also conformed. So why make only one kite when the chance was there for half a dozen from the same plan.

These planes usually had distinctive color schemes which provide the final touch to identify the type. Color schemes are detailed on the plan, others can be found in various books concerning the period. These models don't pretend to be scale, but the Albatros circling up in the sun, or doing a strafing run over the transmitter certainly looks real enough.

Three WW I Scouts are shown on the plan, but others fit the pattern - Pfalz D-3; SE5a, (build two top wings for this) and others you'll find by going over your files.

Colors used on my Albatros are only for effect, yellow with red trim arid black crosses. Not authentic to any one aircraft, but of the time. Plan colors are fair dinkum, but if you like brilliantly colored aircraft there's no need to stick to this, so long as you don't use Dayglo.

Interplane struts have been omitted, mainly because they have a distressing tendency to poke holes in the wing covering. If you must have them, a harmless representation can be had by stringing chunks of Wakefield motor in light tension between hooks top and bottom. Looks OK when the ship is airborne.

After I had finished the Alb, there was little opportunity for test flying, all I managed was three flights, the first with a bang-bang escapement (sequence) that I promptly changed to a compound. There is enough trouble flying a new aircraft without worrying about what rudder control you gave last. Anyway, the first flights showed a pronounced stall that declined to be cured, resulting in arrivals from low altitude that at least proved the kite was tough enough. After this it hung on the wall until my mate Dick Everett look it off my hands.

He installed his own radio (homemade) and an OS compound actuator. The engine is a Hungarian diesel of 1 cc that is not quite powerful enough, but sufficient for calm weather flying. Dick soon ironed out the trim with more downthrust, and some positive incidence on the stab. He really gets a kick out of flying the Albatross low over the transmitter, which naturally delights the other flyers as well. The sight of it cruising against the cloud background is proof enough that the idea has distinct possibilities for a spot of R/C combat.

The plan as given here incorporates modifications since used on a Nueuport version. The batteries, initially high in the nose, have been lowered, and the actuator has been mounted on a sliding ply panel for easy access and hitching up of the rubber drive. The fuel tank has also been enlarged for longer flights. With the light equipment available performance should be exceptionally acrobatic, with the aircraft correspondingly light and even more crash-proof..." 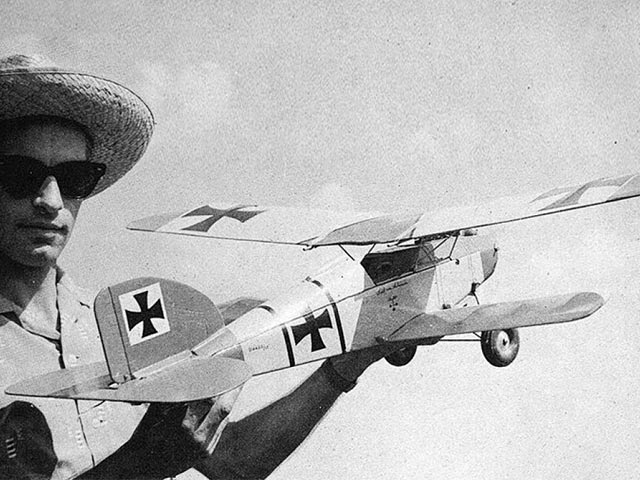 I am attaching photos of my recently completed Chameleon [more pics 005,006]. I opted to make it as a monoplane. It is electric with four r/c channels. Thank you for posting the Chameleon plan.
TomBurkett_Canada - 08/11/2019
Please find attached several pictures of my Chameleon bipe [more pics 007-010]. It's been flown a few times. I have changed the wings to Jedelsky wings. Seems to fly well and it's has some wear and tear.
TomBurkett_Canada - 22/11/2019
Add a comment