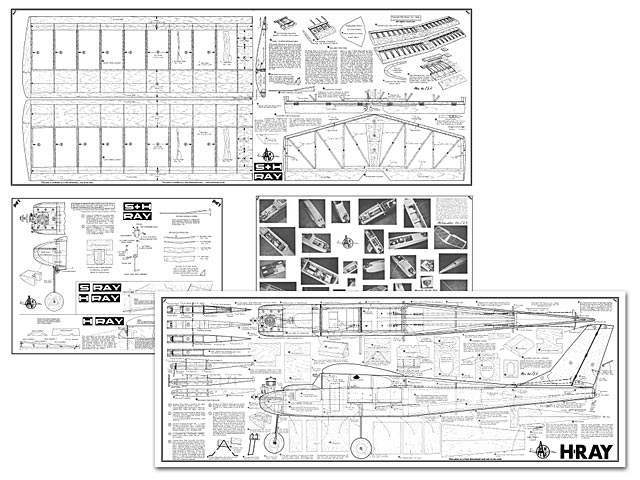 Quote: "Review by Chris Susicke. Early RC Models: H-Ray. This expertly replicated kit is a blast from the past that still looks and flies great!

Early RC Models offers exactly what their company name implies; that is, high quality laser cut kits of some of the most well known R/C designs of the 50s, 60s and 70s. They have stayed very true to the original designs, while also making subtle improvements for the sake of easy building and laser cutting technologies. What we the modeler get is an accurate reproduc-tion at a fraction of the cost of hunting down an original kit, with much higher quality and precision cut wood.

This review focuses on one of Lou Andrews' most well-known and successful de-signs, the H-Ray. The H denotes that it has a high wing. Although this particular design first flew well before I was born, its traditional trainer-like layout promises to be forgiving and easy flying. Early RC Models has faithfully reproduced the kit from original plans with just the above-mentioned deviations. Let's get building!

The construction of the H-Ray is rather simple with no surprises along the way. I found all of the wood to be of excellent quality, and the laser cutting was top notch. Note that you get very little hard-ware in the kit, with the exception being the nose wheel bracket. You will need to provide your own pushrods, control horns, etc. Its relatively small size means you can build it on a small bench (or in my case, a coffee table)! You begin with the fuselage sides, which are constructed on the wax paper covered plans. Making sure to make a right and left hand side, piece together the outer sides, doublers and wing saddles. The firewall is laminated and the en-gine mounting rails are installed. The nose gear bracket is also mounted to the firewall.

A note here: The rails are long and thick, and will get in the way of mounting a modern fuel tank later. I recommend cutting them off after the firewall as opposed to leaving them full length. Otherwise you may need to grind them out later, which I found myself doing. You will also lighten up the nose of the H-Ray, which is very beefy. If you are electrifying your H-Ray, you may want to eliminate them altogether.

Now the firewall and first bulkhead are glued to one fuse half, and then the other half will be installed followed by more bulkheads. A few stringers are added, fol-lowed by the windshield block, main land-ing gear, front hatch and bottom sheeting. The one-piece main gear is sandwiched in between two pieces of plywood, and the assembly is slid into its plywood slot. Sand the fuselage to shape, and put it aside.

The wing has a flat bottom airfoil and is rectangular, so building it is very simple. The front and rear bottom sheeting is pinned to the plans, and built on them. The lower spar and leading and trailing edge stock are glued to the sheeting. Ribs are then slid and glued into position. Care must be taken to get the proper angle on the root ribs on each wing so that the dihedral is correct. The ply joiners can be used as a guide here. The upper spar is dropped in, and the wing can be sheeted and cap stripped. Repeat this process to generate the other wing, then epoxy them together and set it aside to dry. The vertical tail and rudder are sheet balsa. The horizontal tail is built from sticks over the plans. The elevator is 1/4-inch balsa with a ply joiner. A nice and simple design that is also very light-weight.

Once all of the construction is done, give the whole airframe a good sanding. Shape the leading edges and make sure to bevel the flying surfaces to get proper travel. I hinged my rudder and elevator at this point with CyA hinges, which were trimmed down. I also mounted some wheels and my powerplant at this time. The recommended motor size is one of .10 to a .19 displacement (or electric equiva-lent), but I installed an old Enya .25 SS I had kicking around. Mounting the motor now will allow you to check the CG before installing any radio gear.

You can cover your H-Ray in one of many ways. If you really want to go old school, you can use silk and dope. I opted for the more user-friendly iron-on variety. To honor Halloween, my favorite holiday, I went with black and transparent orange Ultracote. This easy to apply covering is available from Horizon Hobby. I used some automotive pin striping available from AutoZone for added flair. The windows were cut from trim sheet. Beginners should be sure to come up with a scheme that is easy to see in the air to eliminate orientation issues.

Next, install the wing mounting dowels. Waiting until the airframe is covered makes this process much simpler. I applied some thin CyA to seal the dowels against nitro exhaust. With the engine mounted, install the wing with some #64 rubber bands. Now check your balance against what is shown on the plans to get an idea of where you want to install your radio gear.

My Enya .25 is a little large for this model, so I found that I needed to mount my radio gear further aft. No clues are provided in the manual as to this process, but some basic modeling experience is all you need to figure it out. Some hardwood square stock can be glued in the fuse to mount servos. For weight savings, I used micro servos on the throttle, elevator and rudder/nose gear control.

Flying the H-Ray is exactly what you would expect. The flat bottom airfoil and generous dihedral offer slow, stable and forgiving flight. I found that the .25 I installed is much more than enough for sprightly performance, and that the recommended range would suffice for a new pilot. It would also be an excellent candidate for quiet and clean electric power. Take-offs are easy and straightforward, and landings are as simple as lining up and lowering the power. The H-Ray is also capable of loops, stall turns and even some inverted flight. All-in-all a pleasure to fly!

The Early RC Models H-Ray is an excellent first airplane for several reasons. In the day and age of the ARF, learning how to build your first airplane gives a new pilot a real advantage. It shows new pilots how an airplane is built, and why it is built the way it is. They can also learn how to fix airplanes themselves, since they now know the construction. There is also a certain kind of pride that comes with it.

I cannot count the beginner pilots I have seen crash an airplane, and then be clueless as to how to fix it. This leads to discouragement. The build time is very low, and the H-Ray can go from sticks to the sky in less than a week. Its small size allows for easy transport, but it is not too small as to be squirrelly. Early RC Models has really nailed this 'better than original' replica of a legendary model." 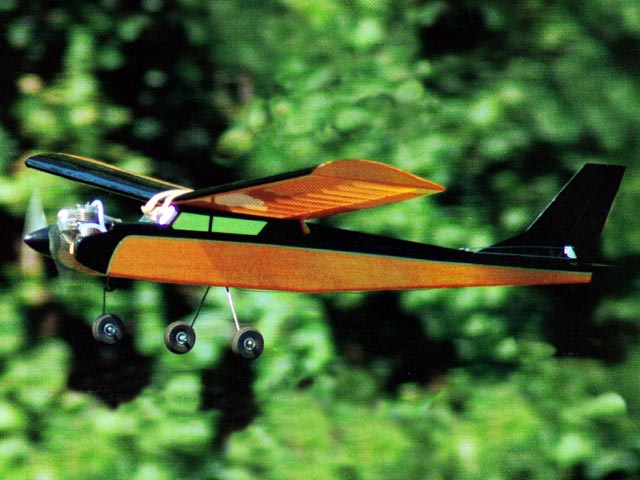 Great Plane, I used it as a trainer for myself when I got into the hobby years ago. I was about 13 years old. I'm 50 now :) I have many fond memories of it. Good plans, easy build, and flew well. It glided well too, landings were great and easy for a beginner.
GeorgeMiller - 18/08/2016
Add a comment