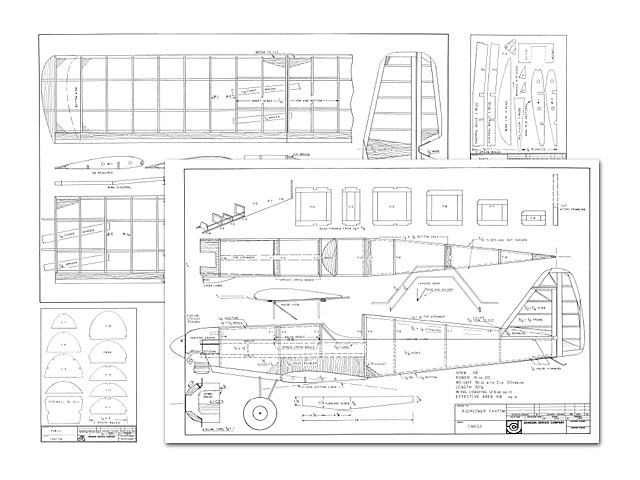 Quote: "The saga of one man's advent into the realm of model aircraft or how one man managed to design, develop and bring forth a biplane of character, ability and manageability for the avid - and even not so avid - bipe fan. A bipe that can hold its own! Fudpucker Fantom, by Dick Wickham.

I got into building from scratch - and somewhat out of my field (sales engineer) - in order to obtain a plane that I couldn't find in kit form. I have a deep-seated conviction that a model does not have to be ugly to fly well. Nor dos it have to be a super-excellent flyer to have appeal.

Being a biplane nut the criteria were a bipe, small engine size and stock material. 'El-Pronto-Typo,' the original, is the Experimental Aircraft Association Model P. Changes were made to simplify construction and obtain stability. It is 'stand-off,' and from downtown you can't see the deviations.

The Fantom is named in honor or Dudley P Fudpucker, president and general manager of the Fudpucker Aircraft Company. Dudley, as most of you know, designed the world-famous, double-inverted, gull-winged Fudpucker Flying Machine. Dudley still resides in Wisconsin, but to avoid crowds and being beleaguered by his admirers he avoids publicity. (If Dudley's name had been Phudpucker, the spelling of 'Fantom' could have been correct.)

I have read about scratch-builts that flew of the drawing board. I must confess that the first Fudpucker Fantom didn't exactly do that. Fact is that it flew like a screaming banshee. The miscalculation was excessive wing loading due to an attempt to match the wing area and airfoil of the original, It would have been no problem for 'hot' pilots, but scared me. It perished when I lost track of my altitude in a late evening sun. How many confessions have you seen that something besides glitch or zap caused a disaster? This was strictly pilot error; you can't see into the sun!

The accompanying material list is for people like myself who don't keep a basement full of balsa. I keep some assorted pieces but hardly enough to gel started on a complete model. There is also an advantage in buying a quantity at one time, as the hobby shop proprietor is more tolerant when you sort through the box. And sort through the box you must, because you must choose correctly. In the words of Swift, the Des Mioines Dean of Scratch: lf she ain't light, she wont be quite right.

The material list is also a guide in construction, but obviously does not list glue, covering, bolts, horns, linkage, etc. I attempted to list the material usually found in a kit. Use small horns and hinges, l used an OS-10 eng.ine and found that Fudpucker flew very well with the throttle 60% open. If you intend to use a two-channel radio, use a size 15 engine.

The building description is brief because construction is not complicated. Anyone who has put a few kits together should have no problem. If you're the buy-and-fly type, have the kid down the street build it for you. If you like to build, you will enjoy putting this together. The building time is not much longer than many kits. There is a lot of personal satisfaction in cutting every part and having something that is not just another kit.

The parts that require a pattern were drawn on 8-1/2 x 11 in paper so that they could be reproduced on the 'stick-on,' brown-back., polyester sheets, These are manufactured by Stanpat Products. Inc. for use in a Xerox 914..." 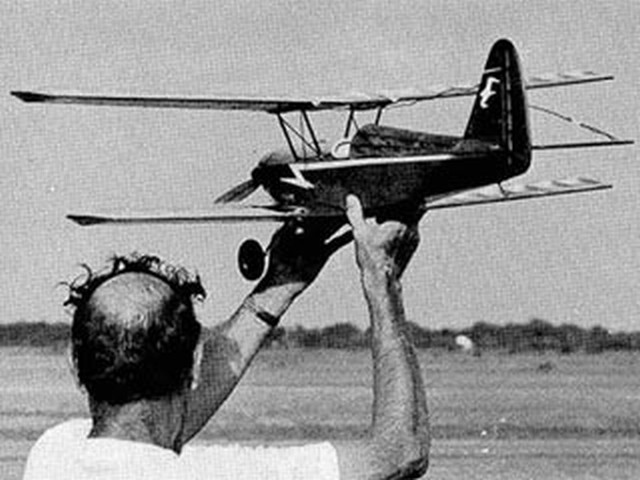