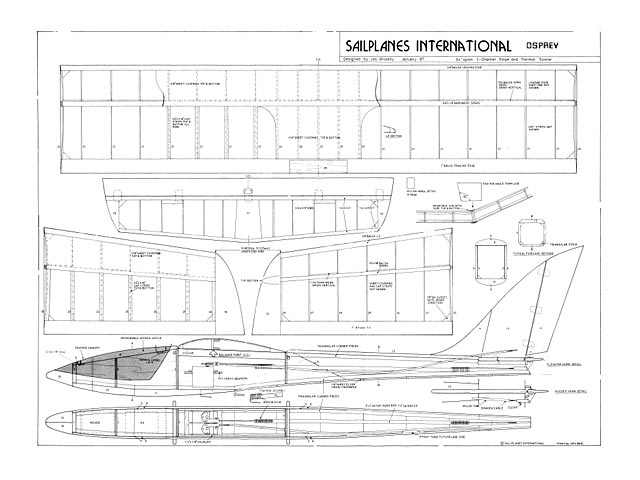 The packaging and presentation of this new to range boxy model gives a good first impression and the kit box without being flamboyant gives a fair indication of the contents and an expectation of a reasonable quality.

Emptying the box onto the lounge carpet revealed that everything was there apart from adhesives and covering. The hardware and smaller pieces were kept together in plastid bags whilst the well-selected balsa and ply pieces were neatly bundled and easily identifiable. The drawing was clear and accurate along with the list of contents and a very comprehensive instruction booklet which without insulting one's own intelligence suggests that Uncle Cliff is standing by your right elbow as the job progresses.

The sequential guide lists things needed to start and a quick check confirmed that we were ready to go, so off we went.

Fuselage: Made up the fuselage sides from the accurately die cut balsa and ply panels which were later aligned on the plan using precut formers. Panelled the bottom of the fuselage before fitting rudder snake and servo mounts, then the top decking was added followed by the nose block. The precut nose block halves seemed too soft so a ply centre former was added to firm this up a bit and the top cross piece behind the nose block was made a little wider to strengthen the front end.

All the stages of building were covered but it would be helpful to glue a couple of strips of balsa to the fuselage sides (see Fig 1), to locate and strengthen the servo mounts as the butt joints could be the first to part in a heavy landing. Everywhere else dropped into place nicely giving a light and rigid assembly.

Tailplane and rudder: This is very easy from strip balsa and a preshaped elevator, though the 1/4 sq cross piece to the rear of the fixed part was too soft for my liking and this was replaced. Extra blocks carry the mylar hinges which are also used on the sheet fin and rudder.

The wings: Thought at first that a built up wing was not quite the thing for an absolute beginner but then I remembered by first efforts at the age of ten with little or no guidance so honestly, with an excellent plan, die cut wing ribs and step by step instructions, no-one would have any excuse for not turning out a decent job. In fact this wing was really quick to build and whilst light was rigid even before the covering was added.

It was at this stage when designer Les Bradley telephoned to say that some early kits were a bit short of 1/16 balsa sheet and asked had I noticed. Well no I hadn't, for this was some of the nicest quarter grain I had seen for some time so this had been put on one side and the wing sheeted from stock material. I didn't like to tell Les at the time, but now all is confessed.

The 62 in span one piece wing will fit comfortably into any car though not into a car boot, so if this may be a problem, consider fitting a single wing joiner of 6 or 8 gauge wire for a two piece wing. Not difficult but do seek help if you are unsure.

Covering and finishing: Again, comprehensive instructions cover any likely questions but pay particular attention to alignment of fin and tailplane when gluing up. The instructions state that covering in the area of the glue joint should be removed but marking out and NOT covering that bit will save possible damage at this stage. I used red Solarfilm with a yellow trim but this model will lend itself well to whatever discrete or garish scheme you can dream up.

Fitting out: Simply follow the instructions on installation and setting up, paying attention to control movements and centre of gravity position. One minor snag was that the length of rudder snake protruding from the rear of the fuselage was bending when 'pushed' so this was stiffened up by tinning with solder along the last few inches. Otherwise, no problems.

This Osprey weighed in at 24 ounces ready to fly and the centre of gravity came out spot on with no nose weight, can't remember when I last managed that!

Flying: There are flying instructions but if you are an absolute beginner it is recommended that experienced help is sought for the first flights. I was lucky because I had the famous Liz here to tell me how to fly it. Lucky too for there was barely enough wind to move the grass and the Osprey was able to demonstrate its light lift ability by tacking up and down the ridge at knee height before venturing out to where the gentle lift was a little stronger permitting a steady climb up and away. Ideal beginners' conditions in fact. The usual loops, stall turns, spins etc, were happily completed and the straight ahead stall was found to be predictable and recovery immediate. Generous dihedral ensures that the modest sized rudder is very effective and the session became relaxing and enjoyable.

A subsequent visit to another slope in a rather stiff wind confirmed that without ballast, the upper limit is about 20 mph though the Osprey penetrated quite well. On the bungee, the Osprey rocketed away and top of the tow line launches gave three times in the region of two-and-a-half to three minutes without thermal assisance. As a smallish lightweight, it will turn tightly to use light, low lift so size is no handicap to thermaling fun.

All in all, a nicely put together kit producing a model that is quite suited for the purpose of introducing beginners to the sport. No doubt the distinctive tip shape which evokes thoughts of an osprey diving, wings part folded will become quite familiar on our slopes in due course." 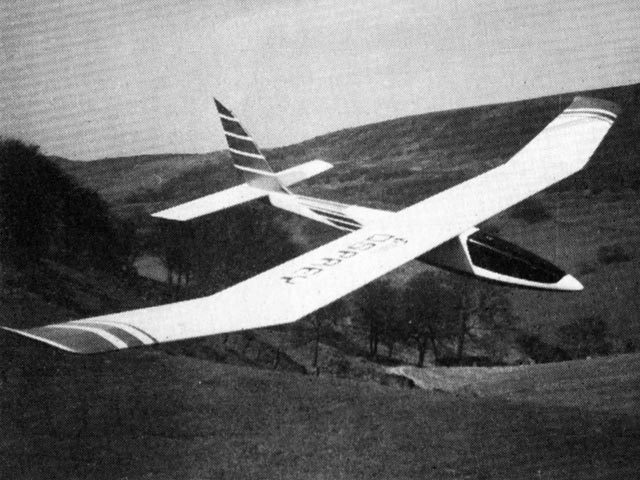