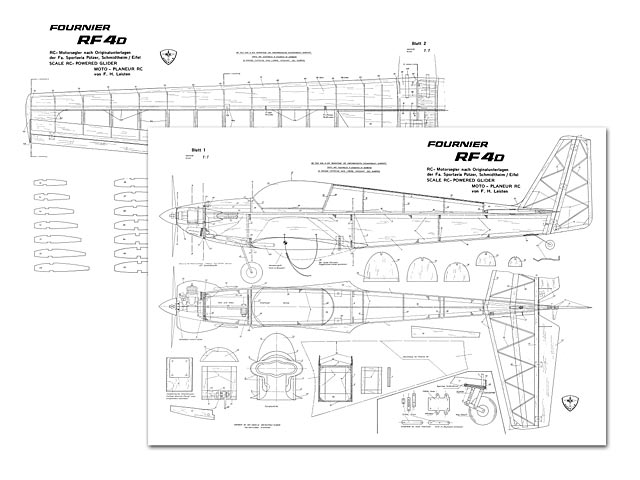 Update 08/09/2021: Added instructions and materials list, thanks to Dries.

Quote (from the German, thro OCR then Google translate):

The present RC motor glider model RF4 belongs to the category of prototype-like or more elegantly 'semi-scale' models. It is intended for advanced RC model pilots who want to create a structurally relatively simple model despite prototypical ambitions and, in addition to the lifelike flight image, also want to control a sporty, fast-flying model, whereby one does not have to do without a whole series of aerobatic maneuvers.

The numbering of the individual parts was made so that you can work according to the sequence of numbers. Let's start with the trunk. First, positions 1 and 2 are glued to a flat surface. Make sure that the plywood parts get into the interior of the fuselage later; so build a right side and a left side! Furthermore, the fuselage frames 4, 5, 6 and the stern strip 7 are prepared and glued according to the plan from the corresponding balsa strips. After the middle board of the fuselage has also been cut, item 3, the lower part of the fuselage is glued backwards on the building board from items 1 to 7.

In order to be able to continue working without difficulty later, the opened fuselage box should protrude about 15 mm on the fuselage slipway or the building board at the front. While it is being ventilated, we can now prepare the engine bulkhead 9 and then glue it in at the front. Now the triangular corner strips 8 are precisely cut to length and glued in place. Now adjust positions 10, 11 and 12 in sequence and glue them together. For item 11 it should be noted that the corresponding bores are available here for the later assembly of the chassis before gluing!

While the lower fuselage box is drying, according to the plan, the rudder unit is put together from the provided strip material pos. 13 to 16. Only when the glued rudder unit is completely dry is profiling according to the plan view using a balsa plane and sanding block. The same applies to the horizontal stabilizer, which is composed of items 17 to 20. The two-part elevator 22 is then profiled from two balsa slabs, and all of the tail unit parts are then put together with the rudder hinges (item 59) and the elevator flap connection item 23.

After you have cut the plywood holder for the throttle leg, item 44 according to the underside of the fuselage at the back and pre-bent the spur from the provided steel wire 2mm 0, item 45, both parts are sewn together using small holes and 0.5mm 0 nylon cord and with synthetic resin adhesive secured. Then the fuselage is cut out at the bottom at the relevant point except for the triangular strips on the inside..." 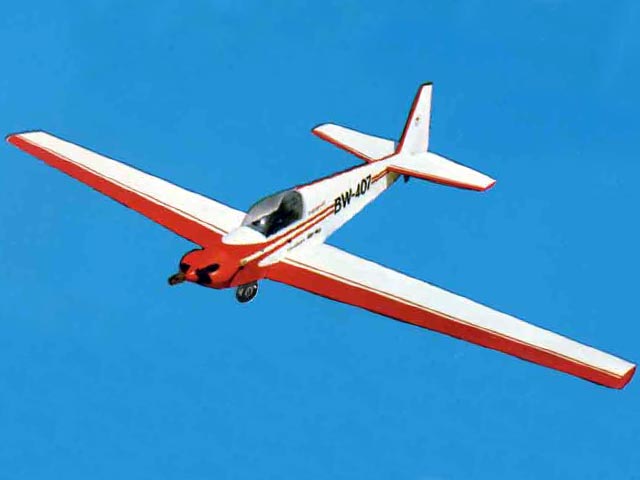