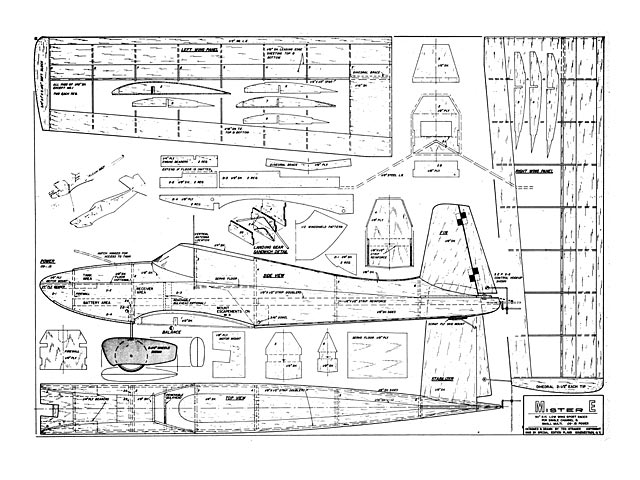 Quote: "Mister E, a play on the word 'mystery', personifies the circumstances surrounding the creation of this junior grade speed merchant.

Six days prior to the Northampton (Mass) R/C Rally held this past June, I decided I'd like to have a new design to show the guys - and that's where the mystery began. What would it look like, how big would it be, what control would it have, how well would it fly and what would I call it - if I could get it done in time?

After making good use of every available minute from Monday morning thru the Friday evening before the Rally was to be held, I was able to get the entire framework done and rough sanded - so Mister E had to make its debut sans silk. But interest was high and we were glad we'd made the extra effort to at least advance the project this far.

When the Rally was over we returned to business at hand-tailoring a silk suit to fit our Mister E so it would no longer be naked before the modeling, world! Soon we would have the answer to two more riddles - would the project fly and would the little Fox .10 RC have the steam to get and keep it airborne? I was more concerned with the latter problem as our ship was outfitted with six pencells, two for the Controlaire '4' receiver and four for the Go-Ac - a respectable load for a .10 to haul in a 50 inch ship.

That day of days finally dawned - we were trapped by perfect conditions, all systems in a 'go' state of readiness and there we stood in the middle of the airstrip without another plausable excuse for delaying the inevitable! This can be a nerve racking time for the faint of heart! Of course I had an ace up my sleeve in the event I was trapped on the field with an audience during the maiden flight - I then resort to plan II which consists of not allowing the engines to rev up to maximum and insisting upon an ROG!? After all - who can blame me if the ship doesn't have enough gumption to take off under its own power?

The engines started on the second flip (during Plan II we prefer it to be balky!!) It wound 'up like a turboprop and I hit the Signal Off button on the transmitter which causes the Go-Ac to go to Low Engine - that sounded better - real low power, not enough to taxi even on a glass surface.

Our hero is now pointed in the right direction for take-off. From here on in it's like any theatrical production. The star is ready to perform at the touch of the Hi-Engine button, the stage manager is ready to dim the lights and raise the curtain (while nervously fumbling with the stick!) and an audience is waiting with mixed emotions. Half of them hoping to see a good flight and the other half silently 'making book' on how many pieces we'll pick up when it's all over. But I'm not worried - I just noticed the condition of the field, it hasn't been mowed in a month and even freshly mowed it's almost too much for the high powered multi ships to overcome for an ROG. Hit the Hi-Engine button - let's get it over with! Give 'em a few ground loops-show 'em we tried, hen abort the flight until some time when no one else is at the field!

The Fox .10 went from Low to Hi without a moment's hesitation and never sounded more ominous. Mister E began to move forward. Give it a touch of UP to keep the tail down - maybe with luck we'll get the GG Coupling wires tangled in the high grass and it'll be all over. It's still moving - only faster. The elevator is neutralized and the tail pops up. It's now about 30 feet out and traveling straight as a die - sunofagun! - looks like it's going to taxi all the way across the field and run into the high grass. Better give a bit of UP to drop the tail back down.

That did it! But not according to plan. Our hero is ad libbing now - it's airborne and flying beautifully. I'm coming unglued!

In all seriousness, this pretty much describes the first ROG of the Mister E. However, this was not its first flight. Actually one of my side kicks, George Van Wagner flew it first while I was trying to get a flight picture. Prior to this we had spent a couple of' days test gliding it under full Go-Ac GG control.

My conclusion to the little saga is a paradox. It has a very gentle glide and will fly under low power without any tricky tendencies. On high power it is as maneuverable as you could want with excellent control response.

It may appear that the elevators are undersize. This was done purposely as we planned to fly the ship via Go-Ac for Galloping Ghost and laid out what would seem to be sufficient elevator surface for control yet small enough to dampen any tendency the ship might have to 'gallop', if possible. After observing the flight characteristics - and recovering from such nerve shatterers as low altitude dives, I would conclude that this size elevator would be sufficient for any type of control. If you happen to be the 'firebrand' type, you can always cut away a strip of horizontal stabilizer and add larger elevators.

One other item: You'll notice that the engine has very little downthrust - only one degree. Hotter or larger bore mills may require one or two additional degrees of downthrust and possibly a bit more right thrust than shown on the plans. The mating of the Fox .10 RC and a Tornado 8/4 prop at the settings shown was the original layout and has remained unchanged..."

Quote: "Flying Models Dec 1965/Jan 1966 issue. Ted Strader, who was EKtronics. All their planes were his designs IIRC."

Article pages, text and pics, thanks to dfritzke. 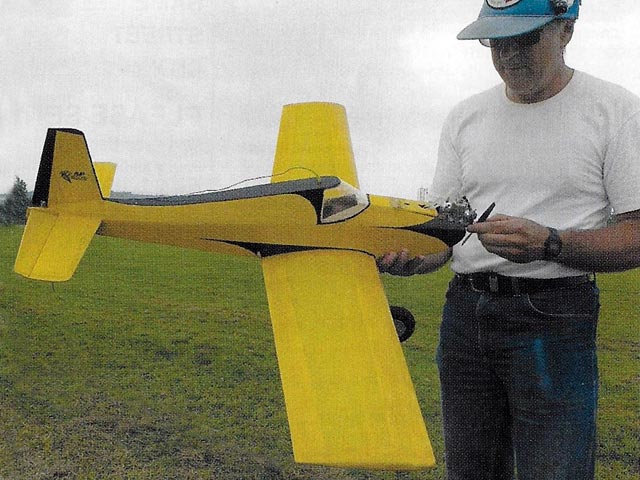 Hey Steve! I need to correct myself. Ted Strader ran Kustom Kits and Special Edition Plans. His first success however was probably the Nomad, and it WAS kitted by EKtronics (Dick Eck) of California. Perhaps after the success of the Nomad, Ted decided to go Into kitting his own designs. He had many over the years, several of which I have built and enjoyed. The “Mister E” is now on the official “someday” list. If I retire next week, and build a plane every month till I cash it in, I just might get through that “official” list. Dave
dfritzke - 02/05/2015
Add a comment