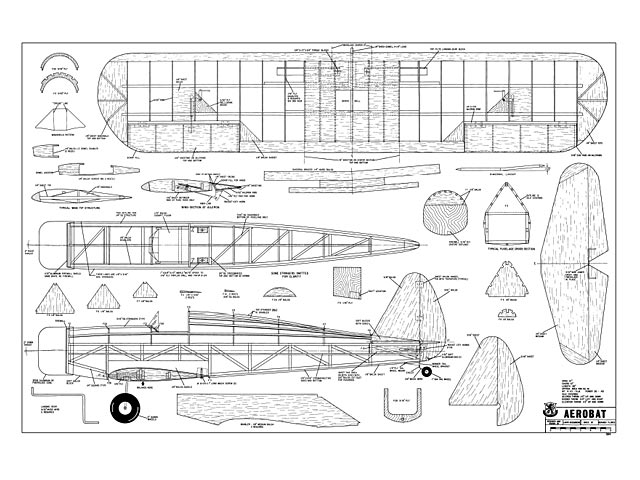 Quote: "If you want to build an airplane that flies well, looks good, gets by on a six ounce tank, and is a real attention-getter down at the field, try Larry Rosenberg's Aerobat.

If you want to build an airplane that flies well, looks good, gets by on a six ounce tank, will take either the new small radio gear or the older 'big' stuff (I don't know about the rest of you, but it is awfully expensive to try to keep up with the latest), and is a real attention getter down at the field, try the Aerobat. I have never had a ship attract as much attention at the field as this one does! Everybody that sees it is reminded of their favorite PT-something or other. Although scale-like in appearance, it is not a scale model but is merely my idea of a stunt ship concealed in a between-the-wars configuration.

A few years ago I decided to try my hand at designing my own airplane and the result was the Kwiksilver (oz9030) which was published in the Nov 1966 RCM. The most important thing that I learned from the Kwiksilver was the fact that it is a tremendous thrill to watch an airplane of your own design take to the air and fly. I have only built one kit airplane since that time, kits just aren't any fun any more! I find that like most flyers, I haven't the practice time, money for equipment refurbishment, or travel time, necessary to be a top contest flyer (I don't know about the rest of you, but I find that I haven't the talent either.) Believe me though, you can really get your kicks out of trying your hand at designing and building your own airplane, it's great therapy.

My latest ship, which is presented here, was designed to fit into the semi-scale type of stunt ships that are just beginning to become popular. I feel that this area of design is going to develop quite a bit in the next year, and the Acrobat is my offering to you for this type of aircraft.

The Aerobat was designed to fit my preference in maneuver style. There are two basic methods for flying the pattern maneuvers: The big, smooth, fast maneuvers such as a military jet might perform; or the tight, slower, low-level maneuvers such as the free-style or acrobatic pilots perform. I prefer the latter and the Aerobat was designed specifically for that type of flying. I decided that a 4-1/2 to 5 pound airplane with a healthy .45 in the nose, lots of drag, not too much wing area, and lots of fuselage side area was just the ticket. As for looks, I have always had a soft spot for the between-the-wars type of airplanes, hence the general configuration. Everyone that looks at the airplane (and believe me, it attracts lots of attention) says that it looks like some airplane that they have seen, but none can quite place it.

The tail dragger style was mandatory for me as once you have learned how to handle one, it is truly the only way to fly. When this ship taxis out to take-off, or taxis back after landing, with the good old Enya .45 popping away in that aluminum cowl, it is as realistic as can be. My Enya is the old .45 with two needle valves, no exhaust baffle, and no exhaust cutout in the cowling. Sounds just great.

The structure, as you have probably noticed by now, is all open ribs, stringers, and what have you. It is NOT tough to build. The structure is specifically designed to be reasonably fast building and I'll bet that this will be one of the few multi RC jobs that you ever build with a true fuselage. My ship is covered with blue and yellow silk and finished with clear dope. Costs less, weighs less, and I like to see the sun shining through the silk. The Finishing Touch decals really do add the finishing touch to the airplane, although it would be nice if the stars and the lettering were available by the piece,. rather than buying an entire sheet and using just part of it.

The flying characteristics of the airplane are excellent. I make it a point to give other people an opportunity to fly my new designs, after I have test flown and trimmed them, in order to get some unbiased opinions of how the airplane really performs. I haven't had any bad comments on this ship yet..." 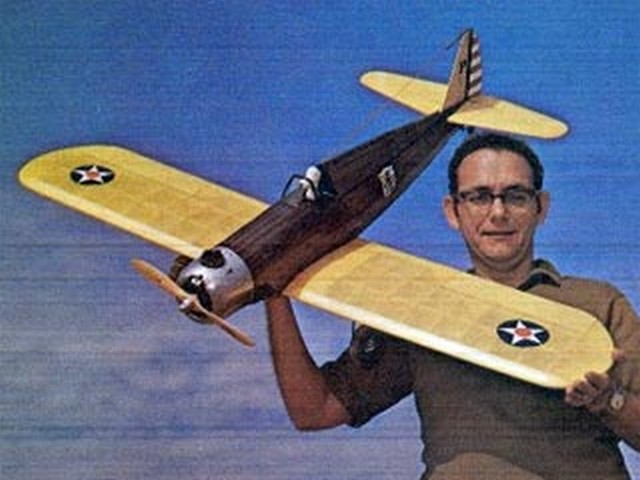