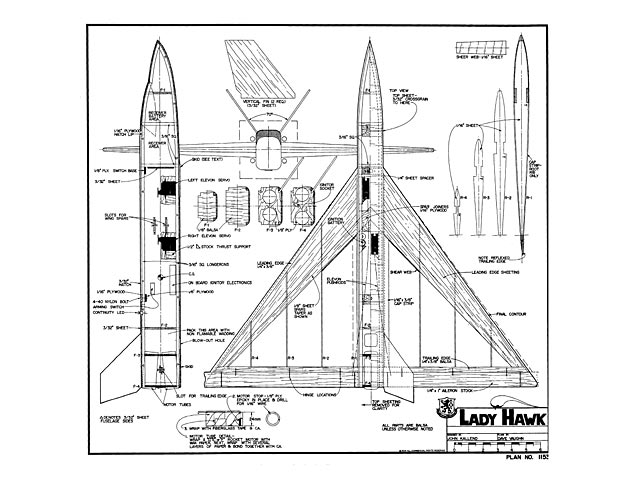 Quote: "If smoke, fire and speed turn you on, then maybe its time to try a rocket plane.

Model rocketry has been around for years. Many of you will have built rockets, or helped your children with them. Indeed, many airplane modelers have built rocket powered gliders. There are even international duration contests for such craft. However, rocketry has enjoyed a tremendous surge in interest and technology just recently. The advent of reliable, high energy density rocket motors from several manufacturers has led to the growth of the high power rocketry movement.

Coupled with the availability of reliable micro radios, this has also opened up new horizons in the realm of R/C. I often assist my sons with their model rocketry activities, and I finally decided that I would like a rocket-plane of my own. I had seen two other rocket powered R/C models, but neither took advantage of the latest motors. I therefore decided to design my own plane. The model, originally unnamed, became 'Ladyhawk' one summer day when a red-tailed hawk took a fancy to the model and chased it all over the sky.

The design goal was to create an R/C model that would go very, very fast, accompanied by flame, smoke, and a distinctive sound. I also wanted it to look like a high performance airplane, not like a pod and boom glider. This meant that the motor or motors would be in the tail, so the CG would shift as the propellant burnt off.

My target airspeed of 200 plus mph clearly called for a strong wing. These considerations led to the choice of a delta planform. A delta wing has a wide CG tolerance, good stability, and can be built stiff, strong and light while still having a small thickness and chord ratio for low drag. Early on I decided on a twin motor configuration, for a more interesting flight envelope..." 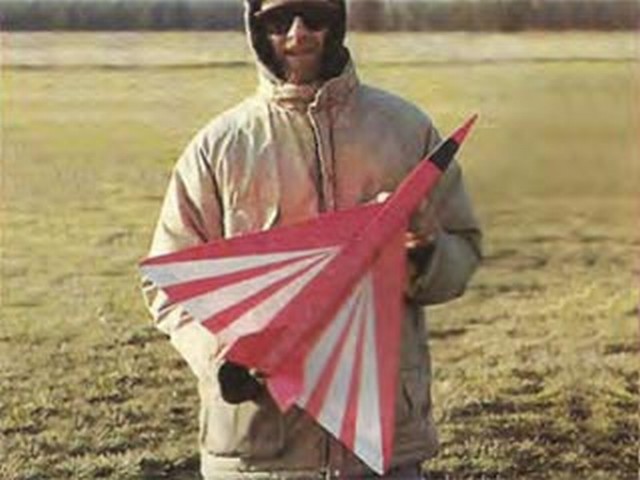