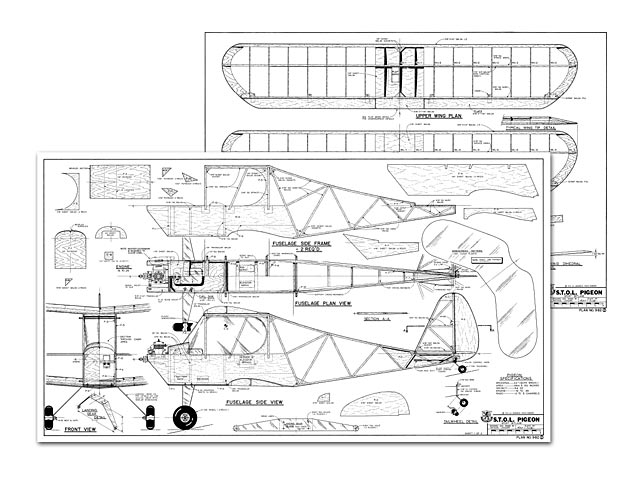 Quote: "What's in a name, right? When I began this biplane it really wasn't meant to be capable of S.T.O.L. (Short Take-off and Landing) manuevers. This aircraft had its humble beginnings as just another pleasant sport biplane with a few interesting additions. You see, I had this theory that placing flaps on the top wing and ailerons on the bottom wing of a biplane might be the answer to a very versatile sport plane. I conferred with the local 'seat of the pants' aeronautical engineers and received two very different opinions. One school of thought was that the Pigeon would pitch down when the flaps were extended; this, of course, was followed by the theory that the Pigeon would pitch up with the flaps. I decided to build the plane at this point, just to see who was right.

The lines of the Pigeon follow the classic style of the early homebuilts with some old timer model looks thrown in. I have a soft spot in my heart for old airplanes and I wanted my biplane to represent that era of aviation.

The size of the Pigeon was determined by an 0.S. .15 that I had in a drawer with no airplane attached to it. The engine runs so well that it just had to be put to use. The biplane is a bit large for this engine in most people's opinion, until they see it fly. The performance is anything but doggish. The light weight of this aircraft, combined with the fair amount of wing area and large surface throws allow very impressive acrobatic performance at an extremely slow and majestic airspeed.

The construction follows my favorite style, stick and gusset with sheet balsa in the load-bearing areas. This type of construction is unbelievably light. In fact, the empty weight of the Pigeon (less radio and engine) is a mere 29 ounces. This weight, combined with a 5 ounce engine and a 20 ounce radio add up to a 3 pound, 6 ounce aircraft. These weights give me a wing loading of 13 oz/sq ft. This figure is approximate and it will of course vary with your radio size and building attitudes. I estimated and calculated to the heavy side so I would not be surprised if your Pigeon came out lighter. The lighter the better on this bird.

I used five channels in this airplane but that is not to say fewer could not be used. This biplane has been flown on three channels and it even does well on two channels. The reason for the five channels in my aircraft is that I tend to get frustrated with a slow aircraft if I can't do aerobatics and have lots of functions to play with. Besides, I had to prove who was right about the flaps.

Construction. The construction is very straightforward. I simplified the wings to give all of you scratch builders a well-deserved break. The ribs are spaced as far apart as I felt practical and the wings are absolutely identical in all respects. The rib spacing allows a mere 34 ribs to be used. That number is very close to most 2-meter gliders, but, remember, you get all the nostagia of two wings for the building time of one...

...the flaps are extremely effective ...take-off roll is reduced to 25 feet on grass and the landing on a calm evening is a very short 5 feet from touch down to roll out ...this model is so versatile that I have given up on most of my other planes..." 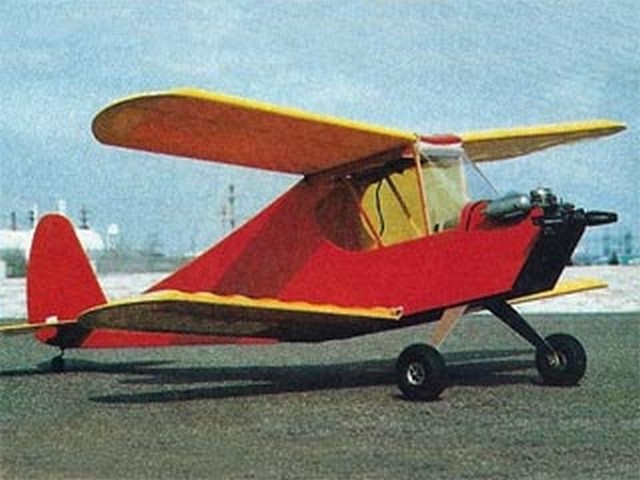