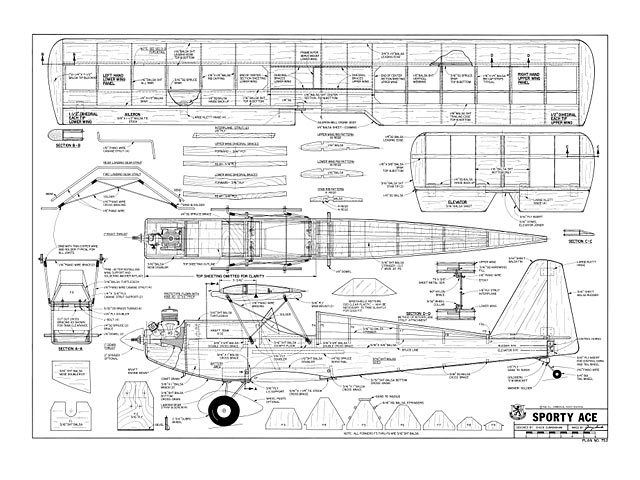 Quote: "If you're a bipe lover and don't want to build a large one, the Sporty Ace is a must. Designed around a .40, it has both appeal and ability. Try it and you'll like it. Sporty Ace by Chuck Cunningham.

As you may be able to recognise, the Sporty Ace is a first cousin to the Lazy Ace (oz5008). Somewhere along the line the Sporty Ace didn't get enough vitamins, and didn't grow up to be as big a bipe as the Lazy Ace. In fact, the Sporty Ace is just what her name implies, Sporty, Perky, Pretty, and an Ace when it comes to flying. She has the same look as the Lazy Ace, but is designed for a .40 engine. She can be flown with anything from a .19 to a .45, but a .40 is the best size to carry her around. Don't get wild and try and put your favorite .60 in the nose; it might fit, but way too much power.

The Sporty Ace was designed to be a fun flying bird for the bipe lover who doesn't want to build a big bipe, but would like the good looks and flying ability of the Lazy Ace. The SA has a semi-symmetrical airfoil, but retains the slightly lifting stab of the Lazy Ace, Miss Texas, and Lucky Lady series of designs. Her handling ability is the same on take-off and landing. On take-off you merely turn her into the wind, hesitate for a moment while she sniffs the breeze, then shove the throttle forward. Her aft end lifts up in about 3 or 4 feet, she tracks straight down the runway, and lifts up whenever you want to become airborne. On a paved field, this is in about 50 to 60 feet. When landing you can either bring her in for a two wheel landing, or slowly rock back on the stick until you drag her in for a three point touch down. I have tried making stalled landings with her, and it is almost impossible to get her to stall out and drop. When she does break, it is just a slight settling straight ahead.

I went to a semi-symmetrical airfoil on the Sporty Ace since most bipe fliers of this size aircraft like to do wild and wooley maneuvers. The SA will do them. The wing area is generous for a .40, 700 square inches, and the weight is low, only 43/4 lbs. (covered with Super MonoKote), which gives her a wing loading (based upon total wing area) of 15.63 ounces per square foot. If you're a heavy handed builder, and like to cover with silk and smear on lots of dope or paint, then you might add a pound of total weight and even then the wing loading would still be a respectable 18.93 ounces per square foot. Trouble comes in when you work in wing loadings of 29 to 30 for sport and fun fly airplanes. but that's another story.

The Sporty Ace is very easy to build yet, by using spruce spars for the wings, is very strong. You can use very hard 1/4 in balsa for the spars if spruce is not available, but the 3/16 spruce spars weigh about the same as balsa, but are a heck of a lot tougher. The interplane struts are very simple to build and install, yet give her just that bit of finish look. Don't let building a wire cabane scare you away. It is easy to do, and is not installed on the fuselage until the finishing process is completed. If you want, you can bolt the wings in place, but I like to use rubber bands on any new design so that, if need be, I can make adjustments in wing incidence. And, speaking of incidence, make sure that both wings are zero with the bottom of the stab..." 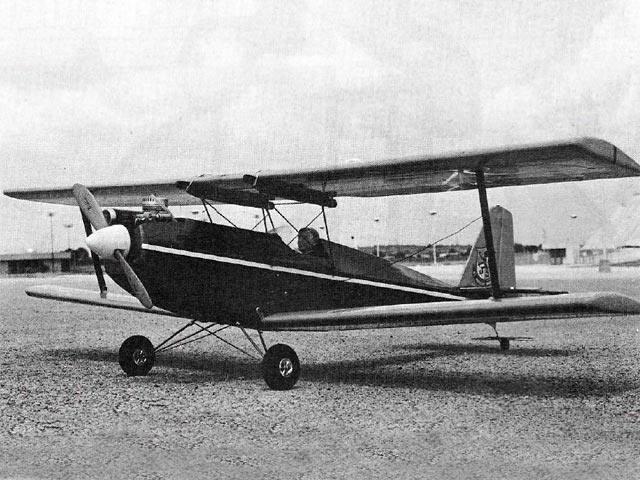