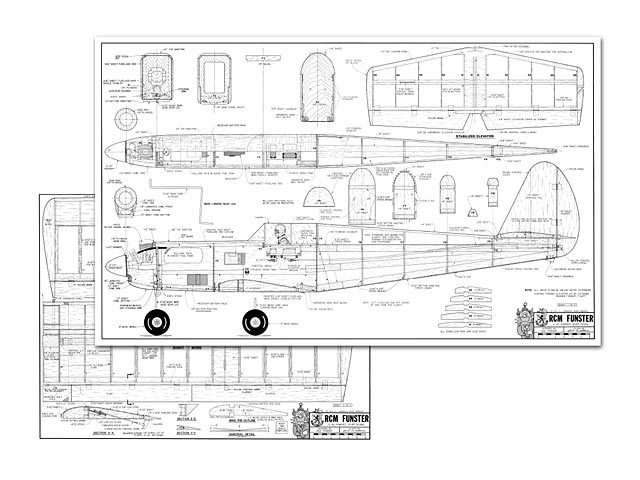 Note this plan uses the Telemaster 40 (oz9384) wing design complete with flaps. At the time of printing the plan, this wing was available as a separate kit from Hobby Lobby at $30.00.

Quote:- "It is strange how some projects seem to get out of hand, but it is particularly heartwarming when everything works better than your wildest hopes. Such is the case with the RCM Funster 40. The Funster is the most versatile performing aircraft with the broadest range of capabilities that we have ever seen in a sport aircraft. We can honestly say that our enthusiasm over this bird can be described as ecstatic.

The Funster concept was triggered by the success of the RCM Big Bird (oz5827) and the improved version, the RCM Big Bird Too (oz6220). The Big Birds were presented as the recommended first radio controlled airplane project, particularly for a person who either does not have, or does not want, an experienced RC'er to assist him. The huge response from modelers who were very happy with their success with the B.B.'s made us realize that there was a need for a suggested second aircraft for those newcomers to the hobby who had learned to fly and felt comfortable with the B.B.'s.

Now, as for the Funster concept, there is nothing new, exotic, or unusual involved. We have simply assembled a combination of features that have been proven over the years to achieve the desired flying characteristics. First, we wanted slow flight capability with good inherent stability and it must be a very tolerant and forgiving aircraft. We also wanted reasonably snappy take-off capability and maneuverability when needed, large wheels on tricycle gear ground handling and to facilitate take-offs and landings on grass fields.

The above listed features weren't difficult to put together. There is another aspect that we feel is most significant, although purely cosmetic - it must be attractive. Square box type designs are very practical and are already available in many sizes and by the dozen. There are a lot of us who have a lot of pride in our hobby and we enjoy complimentary comments concerning our models from wives, friends, and flying buddies. We feel that this has been achieved with very little effort, especially after listening to the compliments at the flying field. Also, you most have noticed by now that we have avoided the word 'trainer' - a term we have come to abhor because of its gross misuse. Bear with us, we ain't through extolling the virtues of the Funster.

From more than 200 club newsletters that we read each month, we have deduced that the largest competitive participation in R/C is in the club low key Fun Fly contests. We have felt that several of these events could be more efficiently and safely performed by an aircraft such as the Punster. We are referring to spot landings, bomb drop, limbo, numerous timed events, and just about any that we can think of. The optional equipment on the Funster such as flaps, nose wheel brake, and built-in bomb release have all been thoroughly flight tested and have proven their worth in practicing the various maneuvers.

The K & B .40 engine has provided more than ample power for the Funster and it operates with excellent fuel economy. Knowing full well that some good folks will be determined to stuff a .61 engine in the nose even though it is in no way needed, the aircraft is stressed to handle up through a Fox .78. We have repeatedly taken-off, performed consecutive loops and 4 point rolls at 1/4 throttle with the K & B .40. After a good many flight hours with the K & B .40, we couldn't resist temptation and installed a Saito FA-45.

It is extremely difficult to restrain our enthusiasm for the Saito 4-stroke engines. Besides being a beautiful piece of machinery, the FA-45, like all the Saito 4-strokers, is ajoy to operate. We were swinging a 12x6 Zinger prop with an impressive amount of power and, at 50 yards, the only noise was that produced by the prop. Not too shabby, especially since the FA-45 does not have a muffler, only a short exhaust stack. The superb performance of the Saito FA-45 is exceeded only by our pride of ownership.

Our radio selection for the Funster 40 was an Airtronics XL Series 6 channel system. This radio particularly satisfies the needs for we non-technical modelers who build and fly for our own personal pleasure..."

Update 23/03/2018: Added additional article (3), detailing addition of flaps and a bomb-release, thanks to davidterrell80.

Article pages, text and pics (in 2 parts).
Correction drawing to this plan, published in the Oct 1982 RCM. The correction shows tailplane horizontal stab set at zero incidence. [Note: as best I can tell, this correction has already been incorporated into this version of the plan. Always worth double checking though.]
Article (3) re flaps and-bomb release mods. 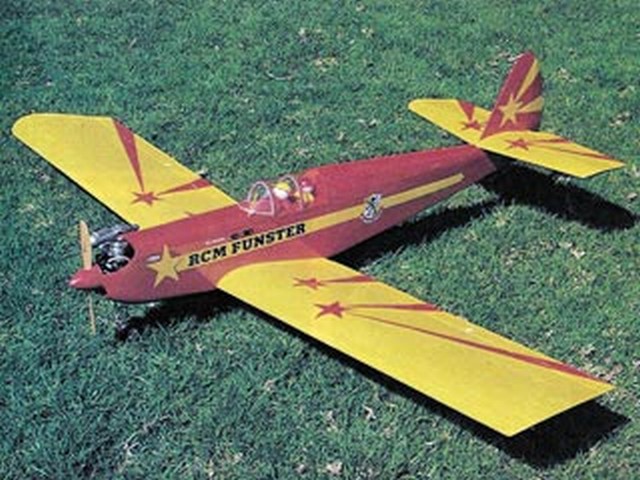