Quote: "This superb little sailplane was designed for the newcomer into R/C. Built around a standard radio with standard servos, this 2 channel 49-1/2in span sailplane will amaze you at its flying ability.

I spend a lot of time observing beginners at RC glider flying, helping them where possible and listening to problems they have. Allow me to list a few:

A. The radio I bought won't fit in the model I bought. I spent $70.00 for the radio and $105.00 for the mini -servo and a small battery pack.
B. My model is too weak for the Hi-Start that the guys are using and no one wants to even try it on the winch.
C. My model doesn't respond to commands for 3 or 4 seconds and I'm always over-controlling.
D. I can't fly if the wind is blowing.
E. The MonoKote costs more than the model kit.
F. Every time I land, something breaks.

To my way of thinking, the problems are driving people away from the hobby so it's time to do something about it. Let's call it a primary trainer, a basic element in building - a '2 x 4'.

The 2 stands for 2 channel standard airborne package (my Futaba weighs 10 ounces). The 4 represents the span about 4 feet (49-1/2in). The area is 409 sq in and the prototype weighs 28 ounces. This combination gives a wing loading of 9.8 oz/ sq ft. The moments and aspect ratios were set up along proven free flight criteria for stability and quick response to slight trim changes (minimum throws).

The low aspect ratio wing lends itself to simple but very strong structures so I used standard parts out of a House of Balsa Two-Tee wing. Spruce spars and cedar arrow shafts are the basic elententa of a very strong wing center section. Balsa spars are used in the tips because of the low loads but the arrow shaft is retained for abuse strength.

The single elevator should not raise eyebrows. Its been around since the 1938 Blohm Und Voss BV 141 full size aircraft. Blaine Rawdon used it on his 'Mirage' design an current times. Basically, it simplifies elevator construction, allows flexibility in tail group loyout and helps to dampen the galloping effect novice fliers seem to produce. With the short moments and low flying speed it doesn't produce a roll.

Fuselage cross-section was dictated by radio component sizes. The battery is the biggest item no matter which way you turn it, so width was established. Standard servos and receiver width established depth. It's interesting to note that the on-off switch is longer than the battery is wide. so side mounted space had to be provided in the receiver compartment so that all standard leads would reach their proper destination without extensions.

Fuselage construction is standard lite-ply with balsa aft planking. A balsa crutch is used to eliminate the uneven bowing of sides when they're pulled together. It also provides additional stabilizer gluing area.

The construction photos and captions cover the construction steps so there is no need to duplicate verbage. Lets discuss some very important items that are usually overlooked by both beginners and experts: (1) Glue: I do not use epoxy for construction. The weight penalty to strength attained is poor at best. The entire model was built with Zap. All joints were double glued..."

Article pages, text and pics, thanks to the shadow. 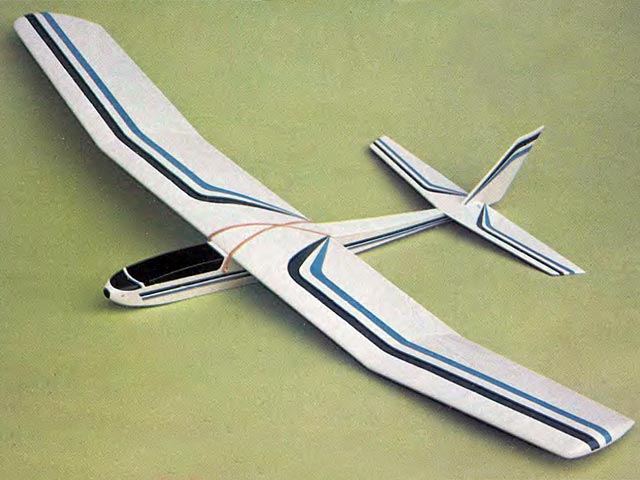 Hello, Outerzone people! My name is Wagner Aoki. I am from Brazil, Sao Jose dos Campos city. I would like to thank you for the site. I had downloaded a 2x4 glider plan. I finished the construction and I would like to share some construction pictures [more pics 003-007]. The maiden flight video: https://www.youtube.com/watch?v=XfW1-sbHqfs. Thank you so much.
Wagner_Aoki - 09/02/2018
What a great plane! I recently built one and it is great fun in the park and handles well in tight spaces as well.
There are a few things I could suggest from experience though, the elevator is only a single elevator, this was used to stop 'galloping' however, these days we can just use expo. just make a full-length elevator because the pitch is also limited. The dihedral is massive. I recommend either reducing it by 20% or so or adding polyhedral with the same total dihedral angle over both points. This is because when in a turn, the rudder yaws the plane aggressively but it continues moving in the same direction for about 0.5-1 second then banks so you can turn. This short period is rather unpleasant and constantly feels like it is about to tip stall.
Also, the CG is too far back. with a motor, it does high alpha easily and flies really slow but it just does not glide so put it forward more than you might think.
This plane is amazing, it is unbelievably slow. I got my friend to run next to it and he beat it. great build aswell, took me 2 weeks. I do prefer the gentle lady to this but this plane is slower than it. Hard to believe, I know. Highly recommend you put in the time to build it.
Zac Apelt - 24/11/2019
Add a comment