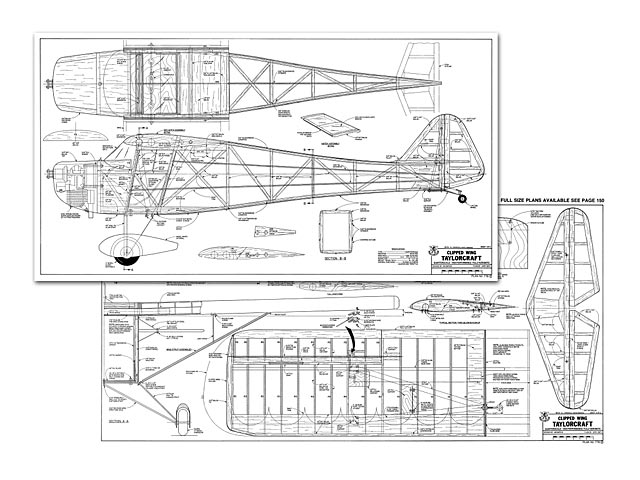 Quote: "Designed in quarter scale, Duane Cole's famous clipped wing T-craft makes a natural for the 'Big is Beautiful' crowd. Can be powered from a .91 to a 2.6 cu in. Clipped Wing Taylorcraft by Jim Simpson.

I met Duane Cole through our mutual friend. Mike Clark, while at the annual Confederate Air Force Airshow two years ago. As I watched Duane's flying I was impressed with his performance and with how easily his plane would adapt to R/C.

The full-size clipped wing Taylorcraft flown by Duane Cole is a 1938 model B-50. It was modified in 1950. The modifications include reducing the wingspan by reshaping the tips and clipping the inboard end of each wing panel. Duane chuckled as he told us he bought the plane for $995 and has grossed over $300,000 with it. He has flown it in all 48 contiguous states and 7 foreign countries including back of the Iron Curtain. With it he has won 2 National championships and was a member of the world acrobatic team.

For this project I obtained a set of 3-views and a brochure on
the current Taylorcraft from Taylorcraft Aviation Corp. 14600 Commerce Ave., N.E., Alliance, Ohio 44601. Then I made a table of dimensions to compare the stock model to the clipped wing version and to the Quarter Scale which I desired. From these comparisons I drew the outline shapes for the model.

Actual construction of the original prototype spanned only eight days from scratch to the model many of you saw at Toledo in 1979! The reason for this is that my wife helped immensely. She did both rough and fine sanding while I glued and carved.

We had originally intended to fly the plane after the Toledo show but we didn't because inclement weather prevented it until too close to time for the Southwest Modelers Show. Being basically lazy I just didn't want to chance it. so I didn't. After the Southwest Modelers Show was over I installed Kraft FM Radio in the plane and headed for the flying field to test hop my creation.

Test Flight Report: The very first flight on my Quarter Scale clipped wing Taylorcraft was something to behold. I had run and adjuste the engine during the afternoon prior to test flight day. Now I had completely assembled the airplane at home and brought it to the field in my van. I unloaded the bird. fueled it. gave it a walk-around pre-flight and control check and finally pronounced it ready to go. It was hot, windy, and no shade nearby when we began to 'prop' it. Not much hand cranking on a 2.6 cu. in. engine with an 18 in prop is necessary before you shut down and check out the problem spots. Since we had primed and choked the engine our thought was ignition. Remove the spark plug. ground it to the engine, turn prop by hand, reveals no spark. hence no combustion, thus engine wasn't running.

There followed a shut down, tear down and inspection, minor maintenance to restore spark ignition followed by lengthy reassembly - all in the mid-afternoon sun. The experience gave credence to Kipling's mad dogs and Englishmen in the midday sun theory. The point of my telling you this is twofold; it sets the stage for what follows and it should be a lesson to you. Don't do the same thing I did. If extensive maintenance is required don't try to fly immediately after tiring yourself to the point of being less than totally cool and rational..." 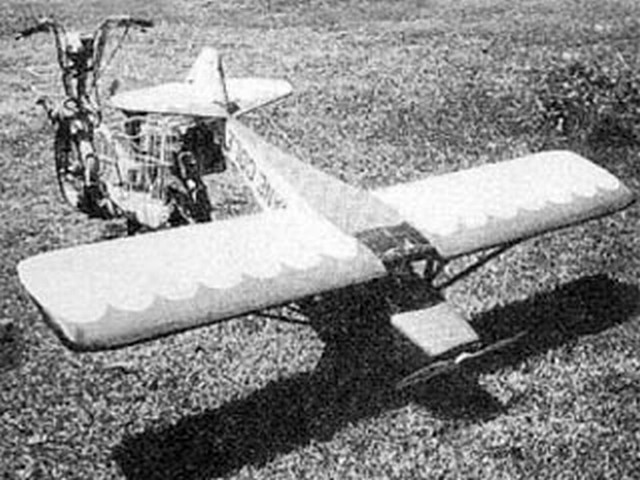