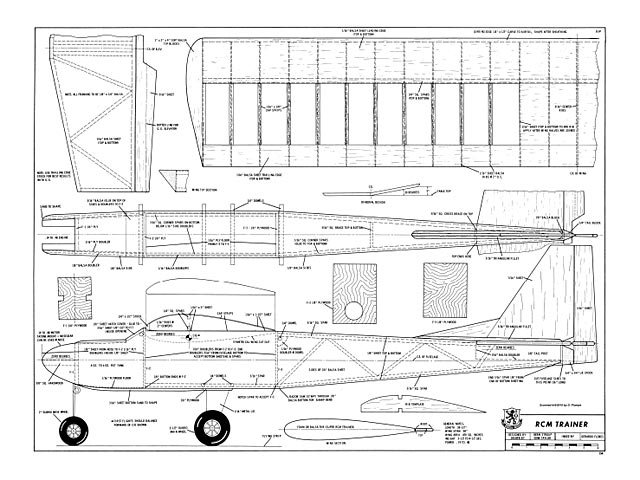 Quote: "The RCM Basic Trainer, deisgned by by HL Stroup.

Last month, in the first installment of our Flight Training Course, we discussed some of the aspects of getting started in R/C. In this issue, well get down to the actual building of the Basic RCM Trainer, designed by Herm Stroup of the Memphis R/C Club, We hope you will follow this program through, step-by-step.

Construction details will be fairly complete since the RCM Trainer is designed for individuals with limited flying and building experience. The length of these construction notes may give the impression that the model is time consuming and difficult to build. It isn't! During December I built two in three weeks - including six coats of dope (I have a full time job, too). KK McClure of the Memphis R/C Club recently cut out and assembled a completed fuselage in three hours.

Some of the building techniques and wood sizes used are rather arbitrary. So far I have built three and no two are exactly alike. Several of my fellow Memphis R/C Club members have built the Trainer and no two of them are exactly alike. Use your own favorite building devices and experiment but don't distort the basic aerodynamics. All balsa used should be medium grade except for soft blocks for the wing tips.

Wing. The prototype was built with a conventional built up balsa wing but all subsequent models have used foam wing cores, no dihedral braces, and no spars, but with the center section glass clothed and epoxied. These wings are true, easy, cheap and require the use of dope only on the tip plates. Warner Industries, whose advertisement appears in this magazine, has both the Basic and Advanced RCM Trainer wings in stock.

After cutting the two wing halves, use the foam cutter to make the 45-degree angle at the tips. Contact cement a 3/16 sheet to each tip. Contact cement the Bris-tol plate to each wing half. The board will straighten some warps in the foam but avoid the warps in cutting, if possible. Match the two halves for proper dihedral angle and fit together. Epoxy the two halves together (use long pins to hold in position) and let dry, overnight.

Spread a 4 in wide coat of epoxy (or resin) across the center, lay on a 4 in wide strip of glass cloth, then smooth another layer of epoxy on top. Seal the trailing edge and the tip plate with epoxy. The forefinger is the best tool for this. After the whole mess is dry, fine sand where the epoxy is used, then dope, Hobbypoxy, spray enamel, cover with Monokote, or cover with shelf paper.

If you insist on building a balsa wing - OK. It will be a little lighter. The 1/16 ribs may be cut from the scrap stock left over from the wing and stab sheeting. Make a plywood or posterboard template. After cutting out all the ribs, stack and sand to exact shape -a little care here will save building and flying problems later. The two center ribs (one each side) should be cut from 3/16 stock..." 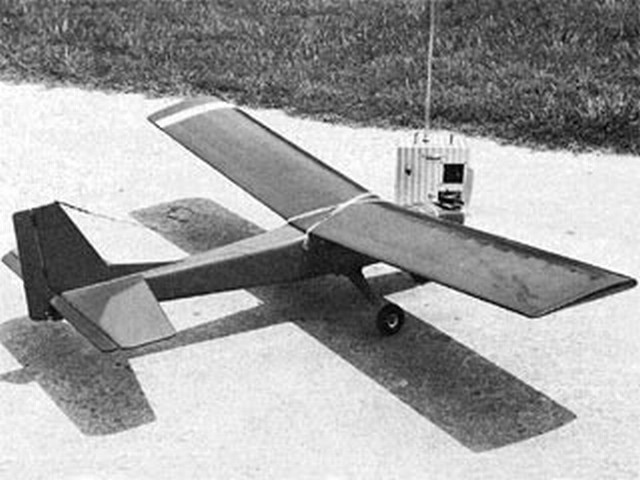 Thank you once again for a fabulous website. I visit it almost on a daily basis. I am in the process of building a RCM Trainer from the the plans I found on your website. Can you perhaps assist me? I would like to know what airfoil type was used for the design of the plane? Would it perhaps be a Clark Y?
BertO - 07/07/2016
Can anyone out there confirm the airfoil used on this? Thanks.
SteveWMD - 07/07/2016
The airfoil used is that famous high tech section, the Reebok 8.5. That's right, it was traced around the author's favorite size 8.5 tennis shoe. It's not a Clark Y. If you use a Clark Y airfoil, you will have to adjust the incidence on the wing mount or the tail or you will end up with a lot of down elevator trim. The Clark airfoil is more rounded at the front, with the bottom curving up to the leading edge. Just go with the Zip-Zip airfoil shown on the plan and you will be fine.
DougSmith - 07/07/2016
Add a comment