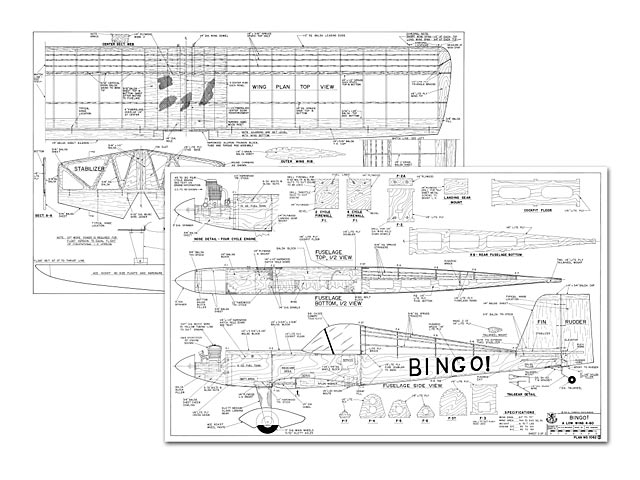 This design is obviously a 4-60 with the wing on the bottom. Well not exactly, but close enough that we simply called the early prototypes low wing 4-60. However, we felt to avoid confusion with its mid-winged and biplane ancestors a new name was really needed.

Many, many years ago our high school 'fight' song used the expression 'Bingo!' and the expression has been in our expletive collection ever since. My assistants have chuckled for years over my use of Bingo! to express satisfaction when I see the X-ray film of a well done root canal, or when a particularly difficult extraction clears the socket or when a tricky bridge seats perfectly. I get that same sort of feeling and have been known to mutter Bingo! when a new design turns out particularly well. It is then only natural we decided on that name for this model.

Indeed, Bingo is a winner in all of its various size/power configurations. It is Bingo indeed!

In addition to the Bingo's obvious good looks, the model has been developed to accept and fly well on an amazingly broad range of power plants. By choosing between the long or short noses and the standard or clipped wing, a model can be built that flies well indeed with everything from a 48 to 90 4-stroke or 40 to 60 2-stroke.

We recognize such claims have often been made before by overly enthused ad men or speculating designers. This design has been flown with these engine sizes - and flown successfully. We have spent 30 months gestating this design, built and flown five prototypes; other modelers have built four more. Power plants used have been the Saito 50, O.S. 60, O.S. 90, Saito 65 4-strokes and the Fox 40, Fox 45, K & B 45 Sportster, K & B 61, and Super Tigre 60 2-strokes.

With proper option choices, prop selection, and intelligent use of the throttle, each and every one has been a total delight to fly. Not only do they fly very well, they all look great in the air and on the ground.

Historically, it might be of interest that our all-time favorite U/C stunt models were Jim Saftig's immortal Zilch (oz265) series from the late 1940's. As a teenager we built Zilches in bunches simply because they were easy to construct, flew well, and looked nice. Somehow, totally unintentionally, Bingo looks a bit like a contemporary R/C version of a Zilch. And that didn't dawn on us until another older modeler called our attention to it.

We've written all this in an effort to interest you, the reader, in building a Bingo! Frankly, that decision was probably made by you as you looked at the photos and drawings and this is all superfluous. If your decision is to build and fly a Bingo!, we assure you there is some special magic about this project and you are bound to fall under its spell.

Construction. General Notes. Bingo may look a bit flimsy at first glance, but one must realize that spruce is ten times stronger than balsa, lite ply weighs close to the same as 3/16 balsa but has the strength of 3/8. Lite ply can be cut smoothly with a knife or saw and adheres nicely with any adhesive common to our hobby. Under no circumstance substitute... " 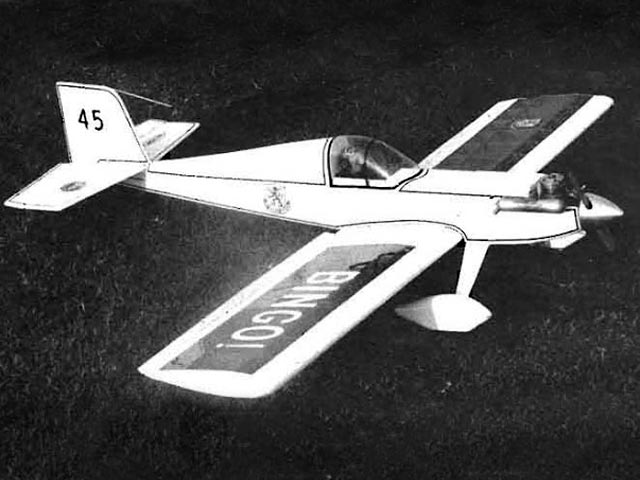