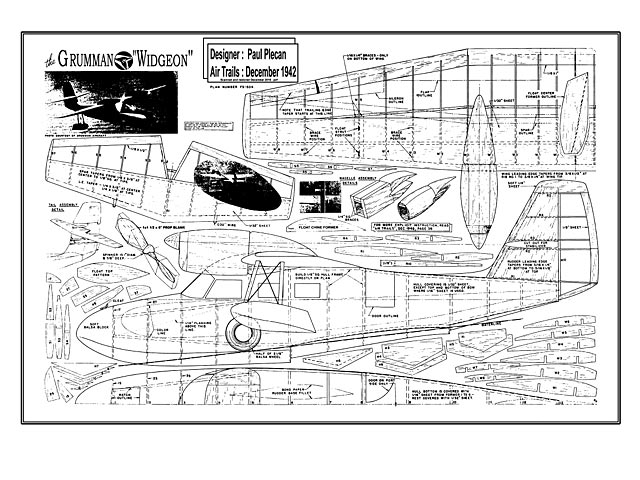 FLYING scale seaplanes aren't duds! Take a look at the action shots on this page, brother, and you'll agree. Getting a model off the water under its own power is considered quite a trick in the modeling game, but this Widgeon does it with ease. Combining easy construction, flyability, and excellent take-off characteristics, this model is really one in a thousand.

It isn't often that one is able to find such perfect proportions in a scale model. It seems the engineers at Grumman designed it with an eye toward making a flying scale model themselves. Take another look at the pictures to see how effortlessly the Widgeon skips off the water and into the air.

You can start your model right now by laying out the basic 1/8 in square framework indicated by dotted lines on the fuselage plan. Do not bother drawing up detailed full-size plans, just be sure that the few dimensions given are followed exactly. Make the rear portion of the fuselage first; that is, everything aft of Station 5. Before removing the framework from the plan, cover the exposed side with 1/32 sheet to keep it from warping once it is removed from the workbench.

After that one side has been covered, remove the framework from the workbench and cover the other side. Now pry both apart with a razor, and you arc ready to insert the cross braces. Start at both ends and work toward the middle, using rubber bands around the fuselage to hold the cross braces in place while the cement dries.

Since the smaller nose framework attaches to the main framework at a alow point, an extra cross-brace 2-3/4 in from the bottom will be needed to support it. The small nose frame is simple, but temporary diagonals should be included to keep the shape rigid until it is partially covered.

Since the top of the nose section contains compiound curves, you will have to plank it. Use 1/16 x 1/4 in soft balsa strips for this. Naturally, you can't plank without formers, so go ahead, cut them out and cement in place...

Update: Added another redrawn version of this plan, thanks to pd1.

Quote: "After seeing the problem reported on the (other) Paul Plecan Grumman Widgeon I redrew this plan to include the left wing and left fuselage half. The wing span is 40 inches." 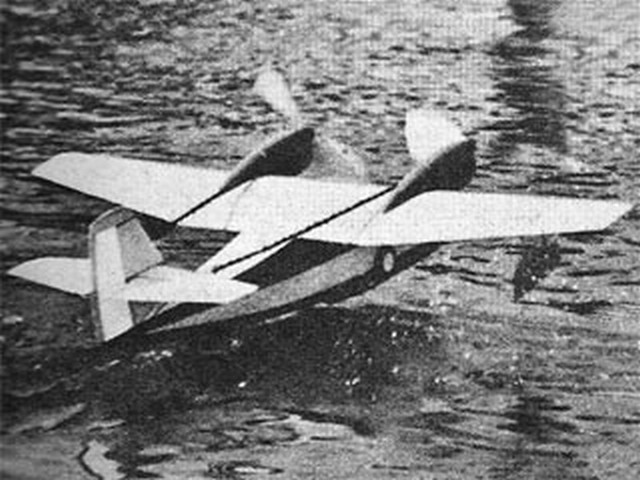