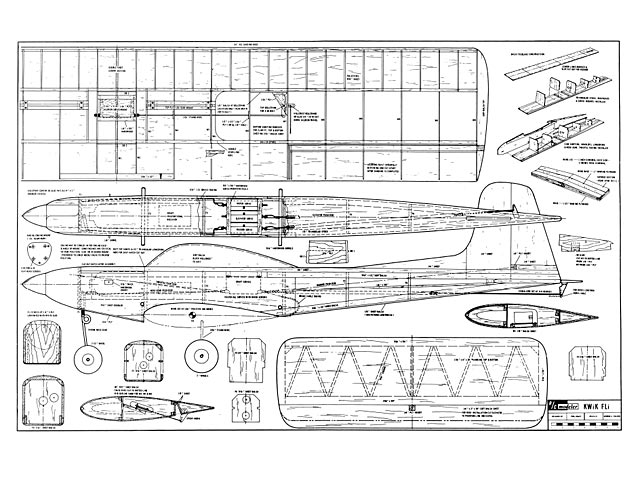 Quote: "For proportional or reeds, the Kwik-Fli is the end of the search for a ship that can be built in less than twenty-four hours, and with the consistent performance of an all-out contest machine. This is one for the hot pilot - and for bringing home the hardware.

Phil's Fourth Place Nat's winning design has accumulated an enviable record of contest wins. For proportional or reeds, the Kwik-Fli is the end of the search for a ship that can he built in less than twenty-four hours, and with the consistent performance of an all-out contest machine. This is one for the hot pilot and for bringing home the hardware.

Last Summer we became intrigued with the idea of developing a contest aircraft combining high performance with the fastest possible construction time. The construction design was also to feature inherently perfect alignment. After a month of head scratching and many sketches, the basic Kwik-Fli configuration evolved.

Aerodynamically, the ship was large with generous moments and stabilizer area. A thick, fully symmetrical airfoil, with sharply radiused leading edge was selected for its constant speed characteristics and superior stability over a wide range of attack angles. This airfoil section is largely responsible for the Kwik-Fli's superb landing characteristics and general flight groovieness. The original prototype utilized a flat wing, sans dihedral, to speed construction. Except for appearance, we felt that dihedral was most unnecessary and probably detracted from the aircraft's overall performance.

The fuselage was designed so that it could be built from the top down, featuring a minimum number of parts. The entire fuselage may be completed, including mounting the stabilizer, servos, linkages, etc while it is still pinned to the work bench and the glue drying. Wherever possible, standard wood sizes were selected, requiring very little cutting to shape... The radial mounted engine was positioned at an angle of approximately 30 degrees from horizontal to provide the proper fuel tank height in relation to the center of the engine's spraybar.

The first Kwik-Flt went together exactly as planned and with amazing speed. The fuselage structure proved not only to be very accurate and fast to build, but exceptionally light and strong. However, the airplane was, as expected, about as ugly as it was fast to build! The straight wing gave an impression of anhedral, while the overall effect of the airplane was that of a monstrous control liner with all-square surfaces! When first placed on the flight strip. the Kwik-Fli caused quite a few raised eyebrows among the local flyers, while others practically rolled on the flight line with laughter. The comments came thick and fast—"Man, that airplane sure is tired - look at the wings droop. Even the en-gine can't stand up straight!" "Hey, Phil - you forgot your control lines!" "Are you sure you've got the wheels on the right side?" etc, etc, etc. Doug Spreng's comment was that somebody finally developed an airplane uglier than the Stormer (oz5794)!

After the next flight, everyone stopped laughing. This ship was the best aircraft we ever had the opportunity of flying! It tracked through inside, and outside loops with almost unbelievable precision and with no corrections necessary. The Kwik-Fli could be put into gentle turns either to the left or right without tighening to either direction, and its rolls were very axial. Landings, too, were beautiful - the ship could be brought in and slowed up until it reached a very high angle of attack, very similar to a Navy carrier type landing - rear wheels settling gently to the runway with the nose wheel holding two to three inches off until the ship slowed, followed by the nose wheel gently rocking forward 'on the runway.

Several hundred flights were racked. up on this first Ksvik-Fli before it met its demise in a mid-air collision. The second prototype followed, and was finished within five days after commencing construction. This ship was much lighter, weighing in at 6 pounds... It was decided that perhaps a little concession to appearance wouldn't add substantially to the building time, so we sanded, down the Kwik-Fli, rounded the tips on the stab, and added a new and larger vertical fin. A new wing was constructed with just enough dihedral to take away the flat droopy appearance. The addition of these modifications, plus colored dope, brought the weight back up to 7-1/4 pounds and the Super Tigre was re-installed. The ship then flew in the same manner as the first prototype. While still no raving beauty, at least its appearance didn't make the spectators shudder!

The curious thing about the basic Kwik-Fli design is that every change we have made from the original con-figuration has detracted from its performance. A larger vertical flit did nothing for the aircraft, except perhaps, make it more difficult to spin. Even the slight dihedral sacrificed some of the axial qualities of the roll. The dihedral did make the airplane slightly easier to fly and had less tendency to show up minor errors in wing attitude during loops, vertical eights, etc. Consequently, and except for appearance, the final version as shown in the plan, is very close to the original except for concessions toward a better appearance.

Construction accuracy is probably more important than minor design differences in the contest aircraft. Thus, the plan shows a built-up wing jig to insure that accuracy..." 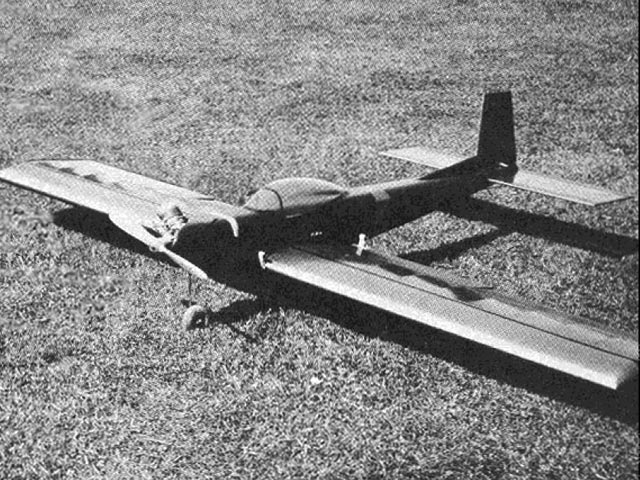