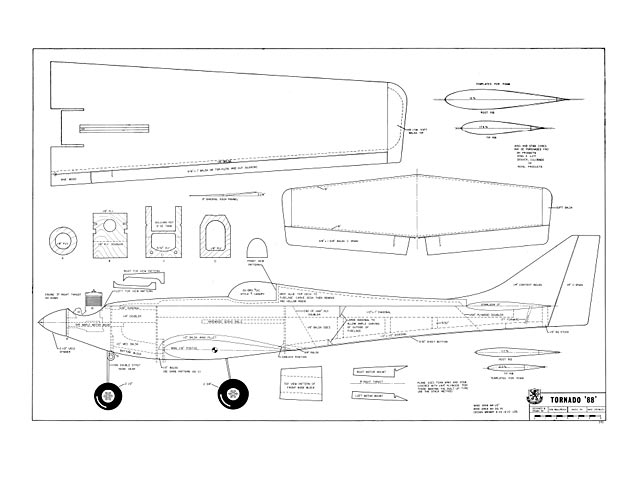 Quote: "The Tornado 88 is a scaled-down version of its big brother, the `Tornado, with some minor changes. The '88' was designed to perform all of the new AMA maneuvers with less effort, leaving only the pilots ability to perform them to his perfection.

I feel it will be necessary to go into some detail about the beginning of the Tornado. The 1st Tornado was completed in 1965, Except for my experience in RC flying for the past 13 years and the number of magazine articles printed, the Tornado has been perfected through the trial-and-error method. The original model had a wing area of 774 square inches and weighed approximately 7 to 7-1/2 pounds. Different fuselage lengths were tried with no appreciable difference, so a compromise was set. Vertical fin area was changed due to a little fish-tailing in the inverted position in windy weather. This was
corrected. Engine side thrusts were tried and I felt side thrust to be necessary. Actually, at full bore, I could tell no difference. The difference I could detect was taking off full bore on a grass field. Without thrust, the plane would have a tendency to pull left due to torque and the drag from the field. If we all flew off of a hard surface, I would say the straight forward engine would be OK, but personally prefer the side thrust. No down thrust is necessarily.

With the introduction of foam wings a few yers ago, I felt it would be a good time to try different airfoils. The original used a tapered wing with the same % for the root and tip. The airfoil is of my own design and, believe me, it works as well as any I've ever used. I have experimented with a blunt to a sharp leading edge and have found the one used to be a very good compromise. I tried a thick airfoil which worked well, but wanted to keep the drag to a minimum, and still did not want the speed of a pylon racer compared to size. The biggest and best change noted in the airfoil was when I increased the % of the tip. The airfoil at the root is 16% and 17.6% at the tip. The increase at the tip rib really did the trick! The plane can be brought in for landings without worry of a tip stall or a snap due to lack of airspeed. Of course, this is not a good practice, and you can lose a plane this way, but the Tornado 88 will just settle in. If you want to give it a try, just bring her in and keep slowing the plane down until the plane will no longer fly and you will note that the wing tip will still be holding a hori-zontal position without any tendency to fall off..." 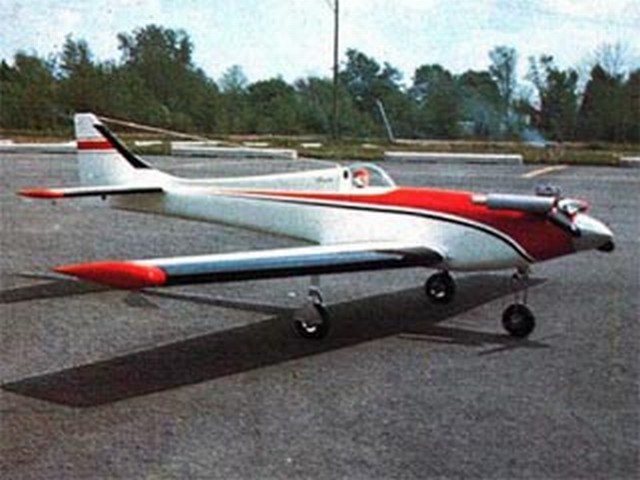