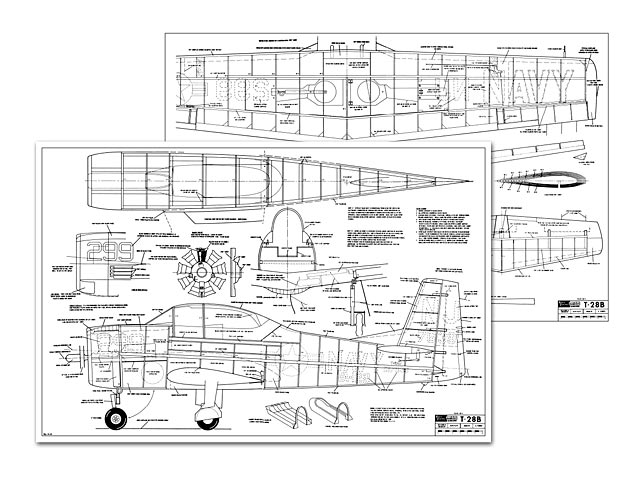 Quote: "RC Modeler is proud to present what may well be the world's finest scale design. Winner of the 1966 British Nationals, Dave Platt's T-28B is a project for the dedicated scale builder. As a bonus, it's flight characteristics equal its appearance!

After the 1965 British Nationals, where I flew my Miles Magister (oz7965), I began looking for a suitable subject for the 1966 event. As the Maggie's Doom had been due to flying from grass with the two-wheeled landing gear, I stipulated that the new project bad to be a trike geared design. (I now feel that propor-tional gear will be the end of this sort of trouble - the pilot can hold slight up-elevator, thus avoiding stalling the model
right off the ground. But, at the time, I was designing for reeds.)

It should be remarked at this point, that here in England, it simply isn't good enough to build a scale job less than perfect, and such items as motors sticking out, or servos in the cabin are taboo! If your model can't measure up to these high standards, someone else's will, and it becomes pointless to bother with less than the best. In the same vein, any alterations to the outline or sections of the model can, and will, lose you the contest. In 1965 the judges found something (actually the wingtip section chord/thickness ratio) on the Magister to be 1/10 of an inch out, and docked points accordingly. These considerations, then, ruled out types like the Airacobra (motor sticks out) and the Comanche (nowhere to put the RC junk except in the cabin). Not that I would consider the Comanche, since I have always stuck to military aircraft.

But I digress. To cut a lot of searching short, the decision was resolved to a choice between the Ryan Fireball or the T-28. One day, someone (perhaps me!) will tackle the Fireball, but in the meantime. I decided on the T-28. Even then, it wasn't all plain sailing. After scaling the plans, the fuselage looked so enormous that I couldn't visualize it flying. The cowling worked out at 8-1/2 in diameter, and to my knowledge, no-one else had ever made a model with so little working prop-blade! After a month or two of horrified looks at the plans, the fateful decision was made in earnest - we had to make it or we'd never know! If it didn't fly, at least we would have learned something!

Just about this time, I purchased a McCoy .60, the only motor likely to heave the bird aloft as I saw it. Remember, we are required to use silencers, too! Similarly, I obtained three deBolt re-tractable gear units - in my blissful ignorance imagining these would solve the undercarriage problems. I have to laugh when I look back on it, but more about the retract units later.

Some time later, the model now finished, we were confronted with the immediacy of the first flight. After I had run out of excuses to my clubmates we ran up the motor on the 13 x 6 prop I had selected. Thrust seemed excellent, so after a final check of the gear, it was chocks away! I needn't have worried! The lumbering bird gathered speed, and when I was well satisfied of flying speed, she was lifted off. Grab altitude quick, what have we got? A nasty left turn and a slight down pitch that full up-trim won't quite correct - get used to it, man. They're all screaming at me - fly around for a couple of minutes, you can't hit anything up there!

After a somewhat hairy landing, trim adjustments were made, then more flights. An hour later she didn't frighten me anymore, and flying was a breeze and a pleasure! Just like a Taurus, really. and the appearance in the air was wonderful! Later on, the T-28 went on to win the Nationals for me, after 15 years of trying in various categories. The Bristol RC Rally, a well-known contest gaining countrywide support, fell to her winning ways too.

In case any of you readers are as daft as I am and fancy owning one of these ships. I'd better see if I can help you along. The very first thing I suggest you do is purchase a Monogram plastic kit of the T-28D South Vietnamese COIN fighter-bomber. (Since my own model was built. I notice that Monogram is producing a T-28B, but I haven't examined the kit.) This does emphasize the variable nature of the model - it can be made in a tremendous variety of color schemes and versions. Build up the plastic model as a replica of your chosen scheme for the RC model - it will prove to be of great value later on, guiding you on small details. Anyway, you need the kit to get the stencilled in-struction notices which, by the way, run into hundreds of words.. Also, the cockpit details will be helpful. These things would have made our plans too involved - they're bad enough as it is! Likewise, the Monogram plastic Wright-Cyclone 9-cylinder radial engine is well worth building, and will be handy when you tackle the dummy engine.

Before you start cutting wood, there are a few things you're going to need, and inasmuch as some of them will take a little time with a machinery owning friend (if you can't do them yourself, that is), we'd better get to rounding up these bits. First, a Mac .60 and a Merco throttle assembly. Drill out thy throttle to the maximum bore it will take and assemble the motor..." 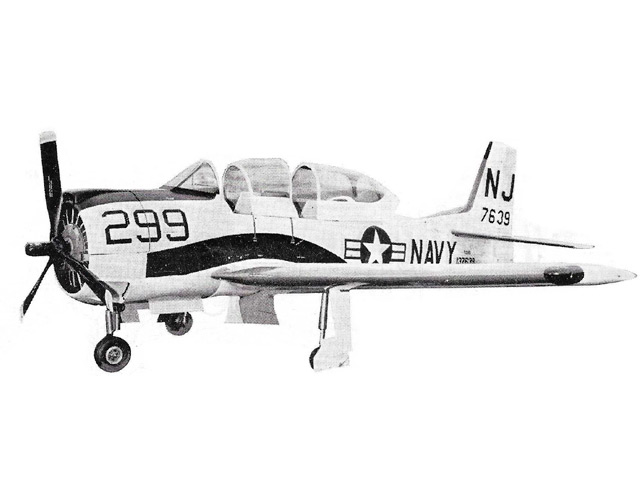