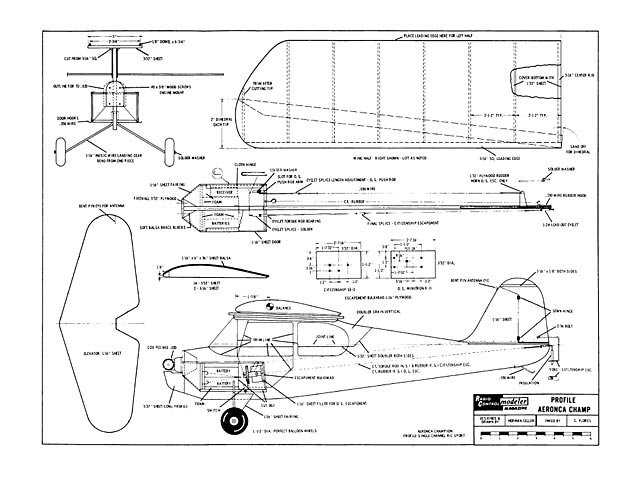 Quote: "Champion every Sunday. A quickly built profile Aeronca Champion, ala control line style, for the R/C beginner, sport flier, or just for a change of pace. By Herman Geller.

THE past few years have seen some significant steps forward in the development of new construction methods and materials in order to eliminate much of the work in an R/C model. Unfortunately, almost all of this effort has gone into the larger multi ships. As the building time was reduced, the cost increased. The average Sunday flier has been left high and dry in the new era. Except for champions of the cause such as Ken Willard and Ted Strader and a few others, the emphasis has been on the larger, more expensive aircraft.

It seemed only logical that an Aeronca Champion be chosen to further the cause. Ken Willard has pioneered simplified small R/C model construction. This one carries on by eliminating the built up fuselage insofar as possible. A person who has never built a flying model airplane before should be able to build this one in a short time with no trouble. For the old-timer it is a model that will go together very fast for small field flying or to get your kids started with this obsession. Further, I think it is a good place to start the wife if you have already gotten her to the point where she is convinced that if you can't beat 'em, join 'em.

Fuselage. Since the installation of the R/C gear in the fuselage is the most time consuming part of the job this seems like the logical place to start. Fuselage is cut from two pieces of or 3/16 thick medium hard balsa. A 3 inch wide x 36 in long sheet is more than enough for the fuselage profile with plenty left over for the center ribs in the wing. If your local hobby shop has the 5/32 material, it will be helpful to reduce the finished weight. If you want to take the time and make the mess, you can sand down the completed fuselage profile to 5/32 thick.

The joint line shown on the plan is coincident with the bottom of the stabilizer. Pick out a sheet that is flat and straight and has clean cut square edges. Trace the plan using carbon paper to make a template for the bottom half and the top half of the profile. Include the escapement cut out and the landing gear hole in the bottom half template. I find the cardboard from a manila file folder is ideal for template making. It is thin enough that you can cut sharp radii with a scissors and not deform the edge. It is heavy enough to trace around a number of times without wearing it out. Align the bottom half of the profile so that the joint line coincides with the edge of the sheet and the front end co-incides with the end of the sheet. Trace the profile onto the wood using a ball point pen with very light pressure..." 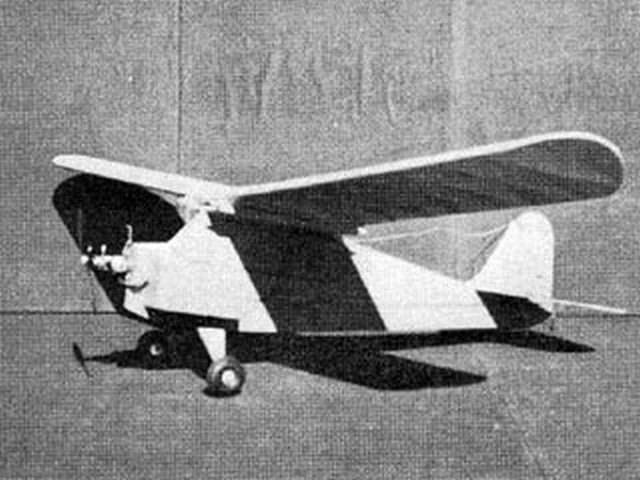 Dear Sir/Madam, Submitting a photo of my Aeronca Champion [pic 004]. I have used Balsa for the fuselage front strengthened with coroplast. Ribs made of 2mm foam board, and the model covered with plastic wrapping film and ironed. Decorated with ductape. Thanks,
Dr Dinesh Kittur - 17/04/2020
Add a comment