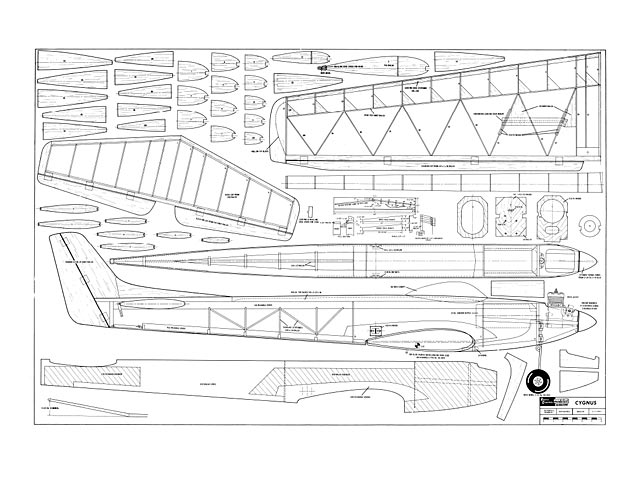 Quote: "Winner of the R/C Modeler Editors Trophy at the Toledo Conference, the Cygnus is the remarkable product of its designers' dedication to on ideal of no compromise in R/C design and construction.

FAR in the back of most every modeler's mind lies a vision of the 'perfect plane'; the plane he'd create if he were going to design his concept of the ideal airplane. This vision had been haunting us for quite some time. On several occasions we discussed the various properties we'd include in each of our respective airplanes, and to our surprise, found that our ideas of what the perfect plane should have were basically similar.

There were certain characteristics which we both felt were vital to a well-designed model. And soon the temptation to combine our efforts in creating one 'ideal' ship could no longer be resisted. We thereby set forth in designing what we thought would be a most attractive airplane. But, devising an attractive plane and a functional one are not necessarily the same thing! Having built numerous kits for Class III multi-stunt ships, we had great respect for the basic aerodynamic principles which these tried and proven, predecessors had successfully utilized. We were not so foolish as to disregard the many good features which these planes had to offer, and we wished to incorporate as many of them as possible in our own design.

But there were other desirable features which the available aircraft lacked. In our design we wished to answer some of the common problems of the average modeler which the existing airplanes did not solve. One of these was to devise a sure-fire method of building a warp-free wing and stabilizer. A second feature we wished to include was a quick construction, sheet and block fuselage with clean lines. As you will see, these features and the method of building them are of some value to any modeler building a Class III ship.

Another aspect which we wished to incorporate in our design was an attractively cowled upright engine with a spinner. True, engines had been cowled before in an inverted position, but this created operational difficulties in the engine itself, and we wished to avoid this. The engine, therefore, had to be upright. But the problem of symmetrically balancing a fuselage, tapered to spinner, with a cowled upright engine was more difficult than it first appeared. And it was of greatest importance that the engine, propeller, and spinner operate efficiently. After many hours of frustrating trial and error, we hit upon a feasible way to do this.

All these features make the CYGNUS more than just another Class III ship, and we hope that our experiences and findings will benefit other modelers like ourselves in building or designing future aircraft.

Wing Construction. Finding the answer to a warp-free wing was not an easy task, but one thing we found invaluable in its construction was the use of a jig (see drawing). This insured a truly straight wing. The true key to the warp-free wing, however, was in the word 'Geodetic.' It was through Ed Kazmirski that we were first introduced to this concept. He explained how this particular type of wing con-struction had the advantage of being extremely strong and rigid without add-ing extra weight. From these ideas, we developed our first swept-back geodetic wing. The most difficult problem we faced in developing this wing was in finding an accurate method of plotting the angular ribs. This same swept-back wing was tested March, 1964, by Ed during his demonstration tour in Japan and was found to be very successful.

The building of this wing is somewhat unconventional, but the final product is well worth the effort. The first step in building is in preparing the 3/32 sheet spars, which must be cut and marked for the rib placement and then pinned to a flat surface. Next, the small angular uprights are glued to a center line in order to keep the ribs standing on the proper angle during the construction. (The rib section, incidently, is a modified NACA 2419-19% section.) The ribs #1S to #12S should then be glued and pinned to the spar and angular up-rights where the ribs have been marked. This spar is then transferred to a perfectly flat leading-edge jig in order to complete what will be the D-tube of the wing..." 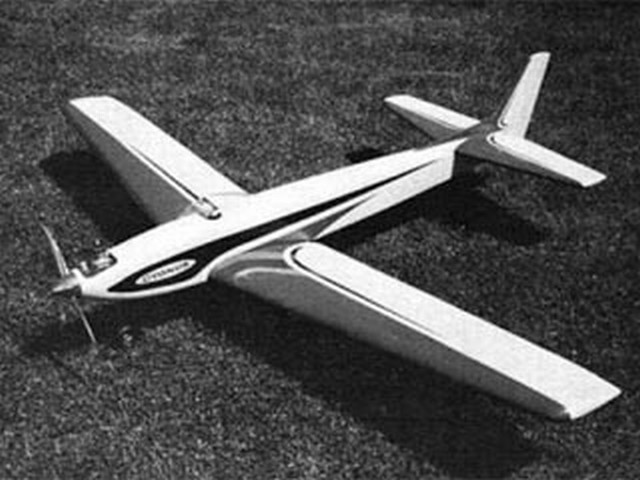