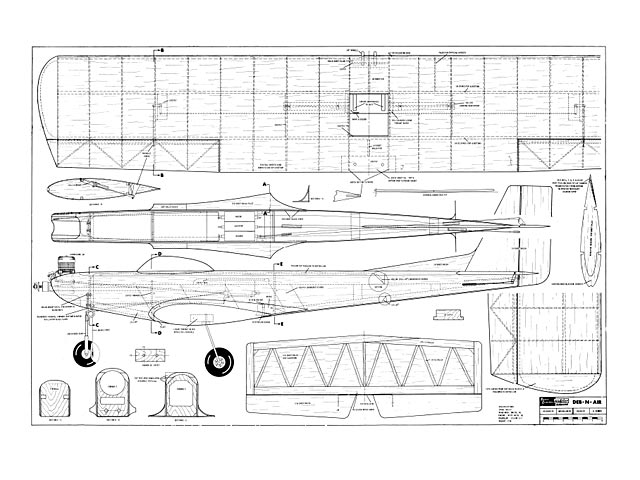 Quote: "The Deb-N-Air is a competi-tion and sport machine par excellence. Aerodynamically far ahead of most of the mul-ti ships flying today, this is the one to watch in months to come! Deb-N-Air by Bryan Lakin.

Deb-N-Air is everything her name implies. She is easy to build, sweet and responsive to fly, and really is a consist-ent contest winner. In the air now less than a year, she has never placed lower than second place in any contest entered. At home she's the local Belle drawing Oohs and Ahaas each time she performs. How did the Deb-N-Air come into existence? Here's the story.

After flying Stormers (oz5794), Orions, (oz927) Taurus's (oz612) and various other high, shoulder, and low wing craft throughout the past few years, it seemed to me that there was still something missing in high per-formance multi competition aircraft. Since I had just come out on the short end of a head-on, mid-air collision last fall, I decided to look for something new and different. It seemed the first thing to do in choosing my next airplane was to write down a list of desirable traits we would like to see in a goad competition machine, and then see if we couldn't find something to fit those specifications.

Our ideal airplane, first of all, had to have good ground handling character-istics. It should track out straight and true on the take-off run as well as through all inside and outside manuev-ers, once in the air. We also wanted a ship that exhibited good, true axial rolls; both flat out and in the looping rolling manuevers. The ability to drag-in for a landing at a smooth, safe approach speed without ballooning was a must in our set of specs.

Sound like a big order? As I began my quest for the perfect airplane, I began to think so, too. One popular type seemed to perform well in the pattern but was obviously squirming through the rolls. And talk about ballooning on the landings - just try to get a smooth approach in any wind at all with this one! (Incidentally, this airplane actually grooved better upside down than it did right side up.) Several of the other currently popular designs had pretty good roll characteristics and were good windy weather airplanes, but were not too smooth in the looping maneuvers and landed at far too fast a rate of speed. Still others flew well in a general fashion but had undesirable characteristics such as fish-tailing at high speed, zooming tendencies, and self recovering tendencies in a dive. Well, I'm sure you get the message by now. I simply wasn't satisfied with anything on the market, and so set out to design what came to be known as the DEB-N-AIR.

I have studied aerodynamics for several years now, especially as related to R/C, and have formed some pretty firm personal opinions as to what R/C designs should and should not do. I might add, that as a private pilot for about 15 years now, I have had some firsthand flight experiences to help guide my studies and opinions. However, I'll be the first to admit that there is virtually no connection between your ability as a pilot and your ability as an R/C pilot. (Beginners take heart!) Your knowledge of aerodynamics will help, and knowledge of control movements required will speed you along at a more rapid rate, but learning to fly the complete pattern proficiently, will take considerable time and practice. Maybe this is why we love the hobby so well; we never quite master it completely. There's always a new challenge ahead.

In designing a modern R/C high performance airplane we want many features similar to full scale aircraft and some that are completely different. Of course, the way you design anything is to first write up a set of ideal specs you would like the plane to meet, based on its intended usage, and then design around these specifications:

1. Power requirement: .45 to 60.
2. Good ground handling with sturdy gear. Plenty of clearance.
3. Straight take-off run with clean break from ground.
4. Straight and level climb-out with no tendency to increase climb rate as speed builds up.
5. Good grooving characteristics both right side up and inverted.
6. No tendency to fish tail as speed increases in a dive.
7. Good grooving characteristics with no tendency to zoom out in a straight vertical dive. Again we want no fish tailing as speed increases and would like for the speed to stabilize as a good speed-drag ratio speed is reached.
8. Rolls should be perfectly axial regardless of whether full ailerons or minimum ailerons are applied.
9. The aircraft should be able to maintain a constant continuous bank of 25 to 45 degrees with hands off by simply applying the necessary amount of elevator trim with no tendency to hook in or roll out.
10. Tail spins should be entered cleanly and rate of spin should be as slow as possible. There should be no tendency to hang in the spin or reverse spin, when controls are applied to stop the spin.
11. in yaw manuevers such as the wing over the airplane should yaw tight-ly with no tendency to spin out..." 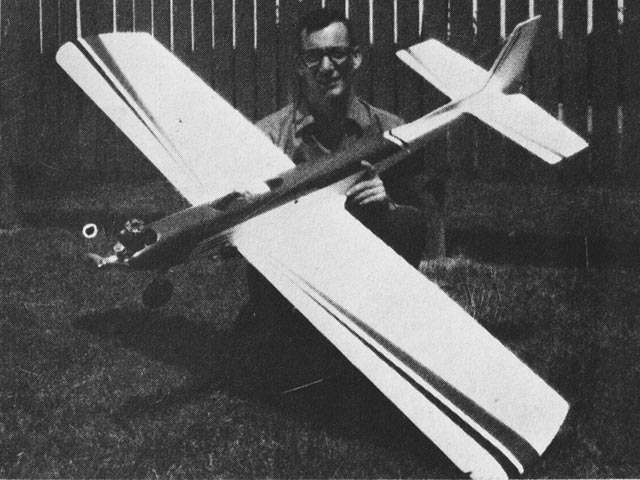