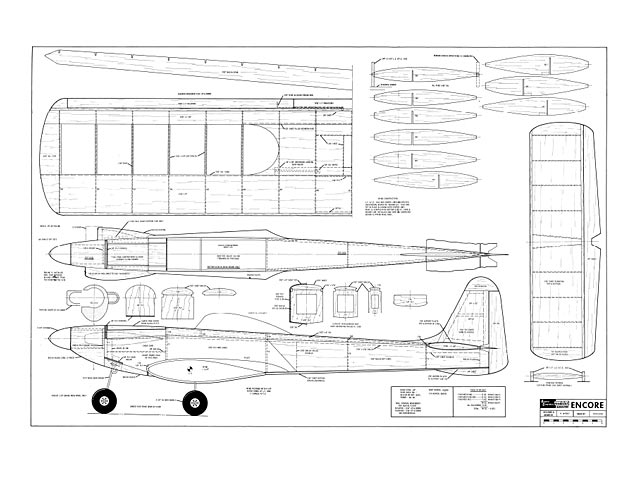 Quote: "If you do some checking you will find that the secret of the Encore is that it is a little bit lighter, somewhat larger in wing area. yet more compact than the average Class III design. The sum total of these criteria, from a performance standpoint, is increased maneuverability plus a higher flying speed. Additional maneuverability is an obvious asset, while a higher flying speed is also mandatory if you fly in heavy wind conditions.

Normally, a higher flying speed is coupled with a higher landing speed. but fortunately this is not true of the Encore. The basically lighter weight, plus ample wing area, means that the landing approach can be made tail-low, adding both drag and lift, which work together to slow down the landing speed somewhat similar to built-in flaps. I believe this is quite the opposite from most other designs which require a flat appoach in order to prevent a troublesome stall.

After watching this one fly, many modelers have asked how I liked the way my Merco .61 performed, only to be shocked to learn that it is only a 'puny' .49! It has been a hard job to convince them that the well used .49 was not, in some way, a special mill. What they have failed to realize is that power is not the only way to achieve a given speed. Efficient aerodynamics is often a much better method.

Let's use the Encore as an example. Another design, similar in size, would normally use a .60 for power, which would mean 3 or 4 ounces of additional engine weight, plus a minimum of 12 ounces of fuel. With this one you save the weight of the heavier engine plus that of the fuel. In addition, the higher fuel consumption is costly and it becomes difficult to find room in the fuselage in which to squeeze the bigger tank. So you see that with a bit more attention to aerodynamics, you can not only use a smaller engine and reduce the fuel bill, but also fly faster and maneuver better! Hard to fight that?

To be truthful, I must say that I occasionally have used a Merco .61 in the Encore, but I will be darned if I could see any difference between the two sizes when a good stunt prop was used. Going to a higher pitch and smaller diameter on the .60 would up the flying speed, but nothing else improved, so why fight it? I have found one advantage of the interchangeability, however, and that is when you know that you will be flying at a much higher altitude than normal, it's easy to have your normal amount of power simply by substituting the .61 for the .49!

I don't believe anyone has found a better way to obtain maneuverability than with lift. You can try power and streamlining, both of which will help, but by far the best and most basic way is to have enough lift. Obviously, the superior way is to have all three - power, streamlining, and lift. It seems that with the inherent weights with which we have to contend, approximately 750 square inches of area does a good job on the normal model. Some have tried more and have been successful when the additional drag encountered did not eat up the available power.

The problem with 750 square inches is that most designs with this amount of area run close to 72 in in wingspan. Such a span means a correspondingly large fuselage and tail, ending up with a large aircraft. The large model, with its necessarily long moment arms, requires generous power..." 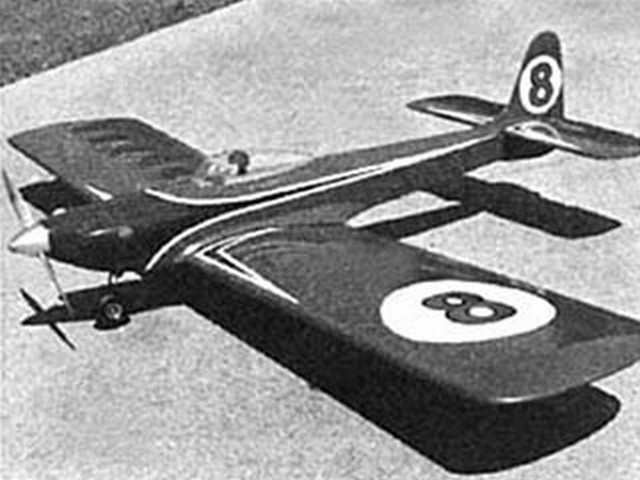