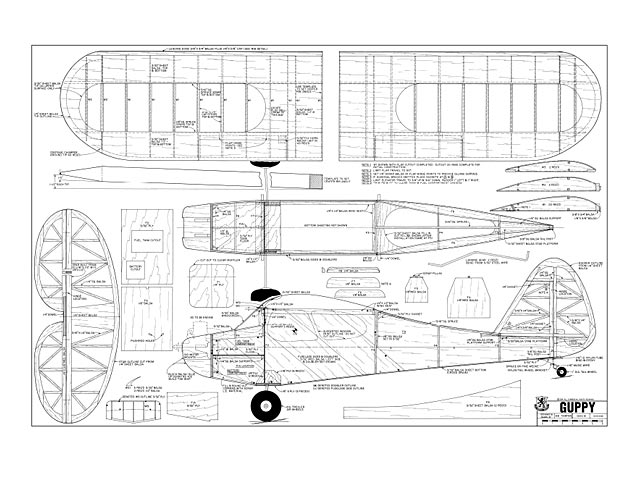 Quote: "Steep vertical ascents and descents with positive control at all times characterize this STOL sircraft. Designed for flying from confined areas, the Guppy is an all-round sport ship where fun is the name of the game. Guppy, by Bob Thompson.

As with most things in our world, Guppy came to life as the result of a need. Our fields are getting ever smaller as every open area sprouts housing development signs. Add to this the ever increasing cost of getting to a flying field and it is evident that something is needed that can operate out of whatever we have close by.

An article in MAN by Peter Russell (Nov. '74) entitled The STOL Machine (oz9889) provided the idea. The problem then became one of finding something to hang those flaps on. This was solved by, and Guppy patterned after, an article and plan by Bryce Petersen in the July '72 edition of RCM, the Piper Vagabond (oz6869).

Once the initial set of plans were drawn up, several new ideas evolved. Why not install a camera, why not a set of slats a la Pete Russell's ship? They remain just ideas, however, as it's been too much fun just flying it. Anyone who does come up with enough drive to carry them through would give me great happiness if they would communicate their results to me c/o RCM. Now, to the construction.

The wing is quite straightforward, however building as outlined will insure a true wing. Start by pinning down and gluing the 3/32 in bottom sheeting, capstrips, and leading edge..."

Article pages, text and pics, thanks to ser. Compete. Previous version was missing some 4 pages. 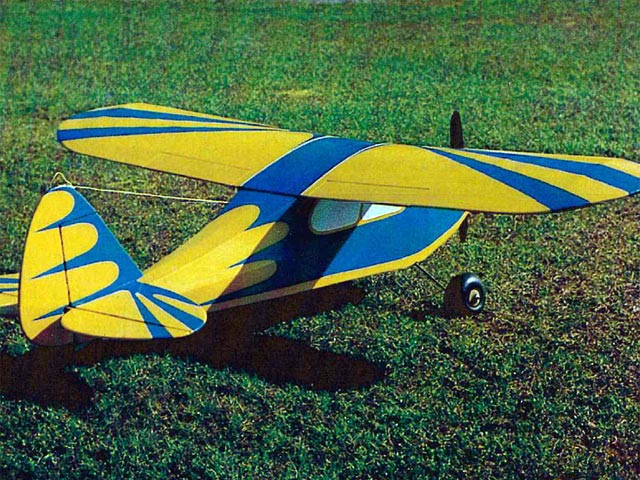